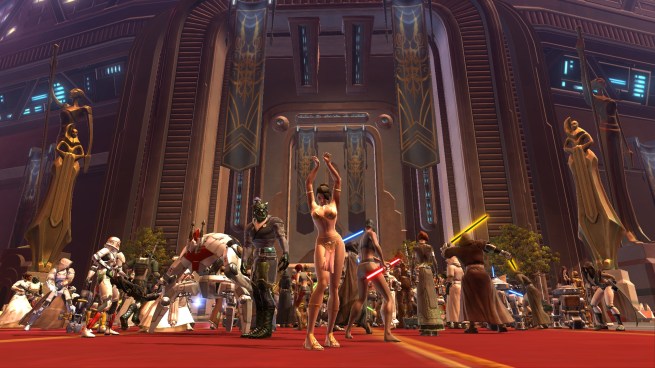 It turns out that Star Wars is some dystopian nightmare for homosexuals.

At least that’s how BioWare’s Star Wars: The Old Republic massively multiplayer online role-playing game paints it. When the developer launched the game, it provided 20 “romanceable” companion characters. Meaning, players can enter into relationships with them as they travel around the galaxy together. The problem is that the flirtatious dialogue options never appear for characters of the same sex — rendering out homosexual couplings from the romance pool.

BioWare announced it would add options for homosexual characters, but its solution is kind of odd.

In the upcoming Rise of the Hutt Cartel expansion for Star Wars: The Old Republic, BioWare is adding a new planet called Makeb. This world is the only place in The Old Republic’s universe where characters of the same gender can get it on. Oddly, the developer didn’t just open the companion dialogue options to player characters of the same sex. Instead, a few gay nonplayer characters are on Makeb, but they don’t have the depth of a full companion.

In doing this, BioWare has set up a fiction where homosexuality is only physically possible on one cordoned off place in the galaxy (that players have to pay extra for), and the relationships are shallow compared to the fully fleshed out companion characters. It is literally separate and unequal.

While this is probably a matter of resources — it’s expensive to rerecord all the dialogue to account for a change in genders — it comes across as inconsiderate.

BioWare isn’t new to homosexuality in its games. The Mass Effect and Dragon Age franchises both provide several options for players to hop into bed (or space bed) with the various other human and alien creatures in those titles.