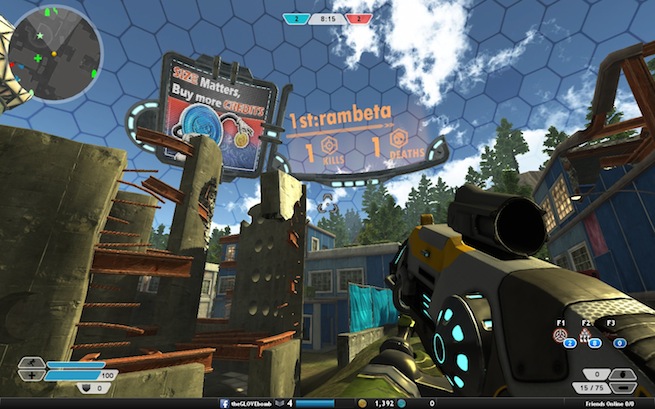 Cockshots. Pwnage. Newbs. In any other game, such crass vocabulary would immediately make me ignore it and move on to something else. But U4iA (pronounced “euphoria”) Games is smarter than that and have instead repackaged that attitude in a way that’s both digestible and hilarious.

The free-to-play Offensive Combat runs entirely within your browser, so you don’t have to download a hefty file to play it. You only need the latest version of the Unity Web player. While the title has been in an open beta for the past few months on its website, the developers have officially unleashed its multiplayer shooter on Facebook, a space usually crowded by farm simulators and puzzle games.

Now I can obliterate stranges with a sniper rifle between sessions of reading my news feed and “liking” status updates on the same screen. Welcome to the future, folks. 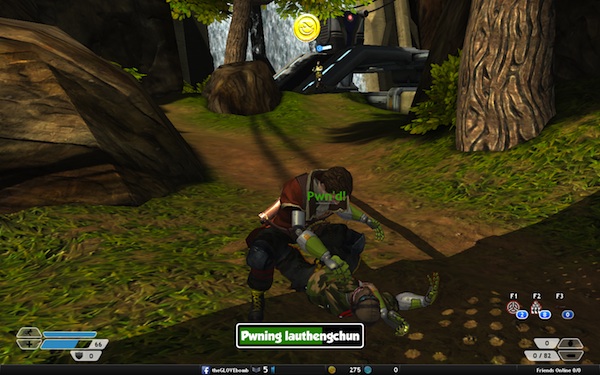 Back to the basics
If you stand still, you’ll die. If you miss your shot, you’ll die. If you stop moving for any reason, you’ll probably die. Quick reflexes and itchy trigger fingers are your most valuable assets when facing your online opponents, especially when only a few shots to the head will take you down. The game has a merciless pace akin to id Software’s Quake series.

The run-and-gun style feels refreshing after playing so many other multiplayer shooters buried in complex layers of perks and upgrades. You’ll still use special power-ups and skill trees, but in the end, what matters is how well you can aim your gun.

Testing your luck
Though you don’t have to spend any real money to enjoy it, playing Offensive Combat feels a lot like gambling in a glitzy Las Vegas casino. Instead of neon signs and an endless stream of drunk patrons, you have outlandish-looking avatars — deranged robots, superheroes, and men in banana suits just to name a few — fighting each other in exotic locales, with the best of the best having their names prominently displayed in the sky for all to see (extremely satisfying when it happens to you).

Other little details contribute to this theme. Every kill and victory gives you gold coins, complemented by a loud “cha-ching!” Sometimes, you can win extra experience points, coin bundles, or unlocked weapons by spinning a large wheel (see gallery below) after the end of a battle. Or you can invest in various mystery boxes that randomly award you a prize. And then you have your experience bar, which is the best I’ve ever seen in an FPS: Not only does it tally the number of XP points you earn after a match, but it has a wonderful sound effect that you’d normally hear coming out of a slot machine.

Even if I had a bad session, just seeing and hearing the bar tick closer to the next level made me feel like I hit the jackpot. It’s a weird psychological hook that kept me playing over and over.

Bawdy sense of humor
With the ability to hit people with the “Binder of Women” and then perform a Gangnam Style dance (one of many taunts known as “pwns”) on their corpses, you can tell that the developers are paying attention to the latest happenings in pop culture. You’ll also find parodies and references to other games in the diverse selection of body parts — including a nod to Half-Life protagonist Gordon Freeman — that you can equip on your action figure-like avatar.

The rest of the items are just plain bizarre, like the tentacle arms, chicken legs, and faces sculpted from Internet memes. Seeing the monstrous abominations running around the maps was a little surreal, as I never knew what people might pick up from the eclectic marketplace.

A not so simple setup
Trying to get Offensive Combat to run smoothly was a bit of a pain. It never became unplayable, but the framerate would slow to a crawl (at times dipping below 20), and the occasional dose of lag during matches didn’t help. And this was after I experimented with the graphics settings, multiple browsers, and reinstalled the Web player.

I have an older gaming PC, but it shouldn’t take this much fussing around to run a browser-based game. Your experience, however, might vary. Some players I chatted with in-game said they had no problems setting everything up at all.

Exorbitant prices for permanent unlocks
In the beginning, you only own your default set of weapons and body parts. If you want more, you can use your gold coins to either “rent” new guns and items (staying in your inventory for a certain amount of days) or buy them permanently (which is the only way you can modify guns with attachments).

In some ways, this makes sense: You can try different weapons and outfits for a small fee before deciding to buy them. But the problem is that costs are rather high, with prices for guns starting at 9,000 coins or more. Skilled players will undoubtedly collect coins at a faster rate, but prepare to devote some serious time if you want to expand your armory.

Despite the technical problems I had to deal with, Offensive Combat is unequivocally the best Facebook game I’ve ever played. It doesn’t have the most robust multiplayer offering out there — it still lacks support for clans and tournaments — but it’s a fast-paced, no-frills shooter that’s easy to get into. Don’t be surprised if it starts taking precious time away from Halo 4 or Call of Duty: Black Ops II.