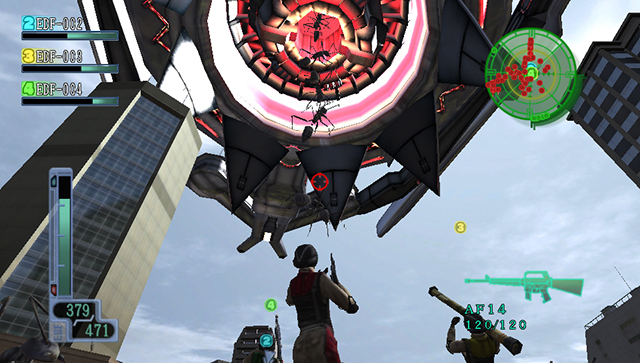 Some games can open your eyes to new possibilities. They can make you question the world around you or even your own being. They are profound, intelligent, and important.

Earth Defense Force 2017 Portable is not one of these. This PlayStation Vita game is about shooting giant bugs. It is ugly, stupid, repetitive, and uninspired.

And yet, somehow, fun.

If you’re looking for an entertaining shooter on the Vita, you don’t have many options. Well, not many good ones, anyway. Too many attempts at bringing the genre to Sony’s handheld feel like half-cooked versions of their console counterparts, like Call of Duty: Black Ops Declassified and Resistance: Burning Skies.

EDF 2017 is actually a port of an Xbox 360 third-person shooter from 2007, but it feels like it was always meant for a portable system. Instead of a continuous campaign, developer Sandlot spreads the bug-slaying over 50 missions. These bite-sized chunks of action are well suited to on-the-go play. Even if you only have 10 minutes, you can still complete a full mission. You can also enjoy cooperative play with up to three friends (or strangers) with local and online multiplayer.

I’ve described EDF 2017 as a shooter, but its role-playing elements are what really make it entertaining. No, you don’t gain experience points or learn new skills by leveling up you character, but every defeated enemy can drop new weapons, an item that’ll regain some of your lost health, or a permanent increase to your maximum health that persists throughout the entire game.

The new weapons are the most rewarding, and EDF 2017 offers a lot of firepower. The trick is that you’ll have to play missions on harder difficulties if you want the best loot. So even if you play through it on normal mode, you’ll be in for a rough ride if you don’t go back to earlier levels on a more difficult setting and grab some advanced weaponry.

Make no mistake; you’re grinding for items, an activity that many gamers find tedious. However, I adore spending hours searching for optimal gear, and I love destroying the later missions with my overpowered guns. My favorite was a rapid-fire rocket launcher that defied all logic as it caused many a bug to explode.

Earth Defense Force 2017 Portable is the gaming equivalent of a bad sci-fi movie. Its plot is simple and ridiculous. Giant bug aliens are attacking the planet, and you have to stop them. That’s pretty much it. And I really mean giant bugs. They aren’t some sort of monster that resembles an insect. They are oversized ants and spiders. I had to laugh sometimes when I saw a swarm of them running toward me. I probably giggled even more when they died, since their carcasses just froze up and fell weightlessly around the map.

Oh, but let’s talk about my favorite gameplay mechanic. Is that giant skyscraper obscuring your shot? Then blow it up! Yup, just one shot from any explosive can take down the tallest of buildings. Nothing like leveling an entire city while you’re “saving” it from invasion.

I don’t even know what to say about the voice acting. I like to pretend it’s intentionally bad to help re-create that B-movie vibe.

Again, this stuff is admittedly stupid, but it’s a large part of 2017’s charm. And as goofy as the game is, the actual mechanics, like aiming and shooting, are sound. You just have to learn to not take it seriously. 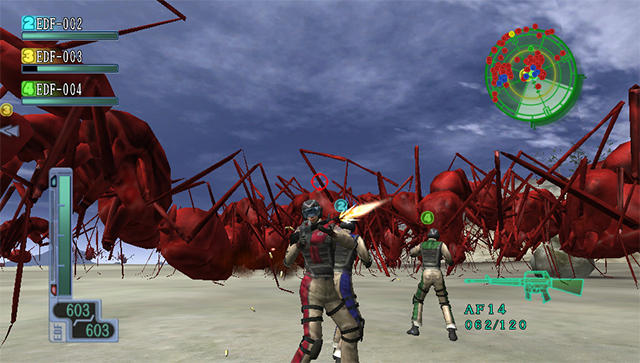 Earth Defense Force 2017 Portable is not a pretty game. Remember when I compared it to a bad sci-fi flick? That includes the visuals. If Far Cry 3 is Star Wars, then 2017 is Plan 9 from Outer Space. Its textures are muddy and blurry, and character models are blocky. You’ll also experience some significant slowdown when the screen becomes crowded with bugs, which happens a lot since, you know, that’s kind of the whole point of the game.

The Vita has shown off some incredibly beautiful games that can sometimes look as good as what we’re used to seeing on a PlayStation 3 or Xbox 360. Unfortunately, 2017 looks more like a PSP game that can barely measure up to the PlayStation 2.

Some missions give you a few vehicles, like tanks and helicopters, but these were the worst-handling machines of destruction I’ve ever had the displeasure of driving. Each vehicle felt like it was operating under a lake of molasses. Simply turning left and right was a monumental task requiring the depths of my patience. This is a big problem when most of the enemies have a tendency toward quick, jerky movements.

As much fun as you’ll have shooting aliens and bugs, that’s pretty much all EDF 2017 has to offer. Playing it a little bit at a time is great, but you’ll easily go brain-dead if you spend a few straight hours working through missions. You really only fight a handful of the same enemies over and over. Sometimes it introduces a “new” foe, but it’s often just a bigger version of some alien you’ve already been battling for hours. Sometimes it’s just a slightly tougher bug with a different color. 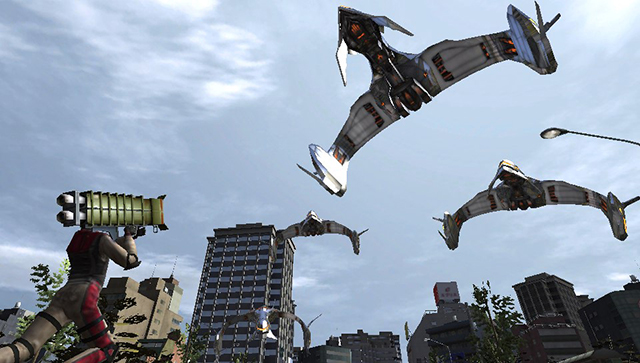 I almost don’t want to like Earth Defense Force 2017 Portable. It offers nothing outside of mindless shooting and gun-looting. But that’s also why I admire it. It’s a throwback to an era when technology limited storytelling and games were simpler. EDF 2017 is not a deep experience, but it’s a very pure one.

Earth Defense Force 2017 Portable is out now for the PlayStation Vita. The publisher provided GamesBeat with a copy of the game for the purposes of this review.