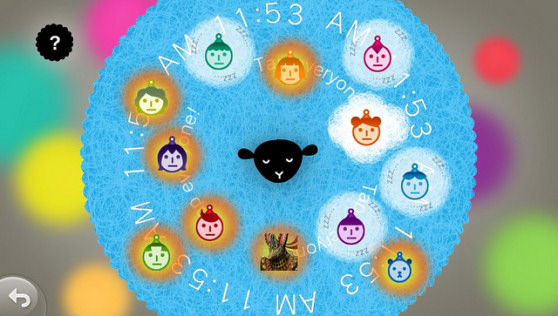 No one likes their alarm clock. It might be functional, but it’s loud, and it occasionally wakes you up at the wrong time. Now, a new application called Wake-up Club is about to change how you feel about getting up in the morning.

Available for free to owners of Sony’s PlayStation Vita handheld gaming device, the application makes waking up fun — and it’s finally coming to North America today, according to the PS Blog. Gamers can personalize the virtual alarm clock with a tone and background theme that’s pleasing to them, so it’s a lot better than hearing the same dreadful buzzing every day. But Wake-up Club turns what used to be a relatively solitary activity — waking up — into a social activity where you earn in-game achievements, or Trophies, that reward you for getting out of bed.

Wake-up Club matches you with 12 other random players who have all chosen the same time to start their day. When the alarm goes off, tapping your bouncing onscreen avatar (the Vita has touchscreens on the front and back of the device) will let the others in your group know you’re awake, and from the virtual club room, you can see who else is an early riser and who’s catching some extra shuteye.

The players who wake up first can encourage those still sleeping to get up by “cheering” them on. As they snooze, other players’ avatars will show up on their screen, and they’ll have to swipe them away and tap their own to join the rest of the “awake” group.

It’s a great example of how gamification, or the use of gaming mechanics and ideas in nongame situations, can improve everyday living. You may actually want to be the first of your buddies to wake up from now on.

You can also tap on other people’s avatars to learn more about those players and even send a friend request. You can check your club records to track how many times you’ve woken up within five minutes, how many consecutive success you’ve had, and how long it takes you on average to get moving.

Players can get started with Wake-up Club by accessing the Vita’s “Settings” menu. From there, choose “Date & Time” and then “Date & Time Settings.” Make sure “Set Automatically” is on.

The more you play, the more chances you have of earning some impressive Trophies. The app features achievements such as being the first of your club members to wake up at least 30 times and achieving a wake-up time that’s faster than 3 seconds. Now that’s embracing a new day.

We’ve contacted Sony for more details and will update accordingly.