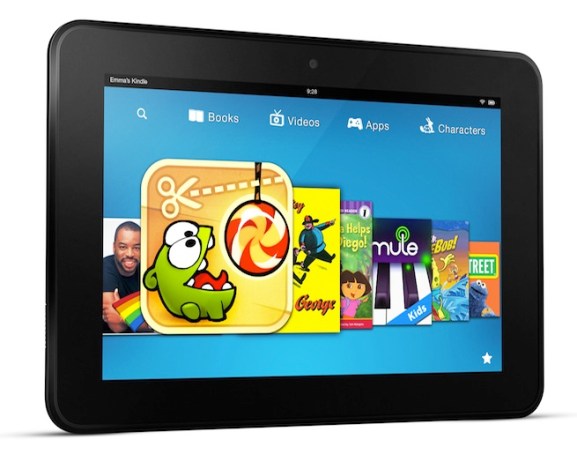 Amazon needs to make only $3 a month on apps or content from each Kindle Fire it sells in order to generate a 20 percent profit, according to new estimates from ABI Research.

Amazon sells Kindle Fires below cost, and it’s been this since 2011. The razor-and-blades plan seems to be: Give away the device and make it up on digital content, such as books, movies, apps, and more. But positive results of this strategy have not been easy to see in the company’s quarterly reports, with Amazon having losses or just small profits for the last four quarters.

However, the plan may be starting to work, and it has prospects for getting better over time.

“Considering the probable margins of app and content sales, our research shows that Kindle Fire is a credible proposition,” senior ABI analyst Aapo Markkanen said in a statement. “We expect that there will be a certain level of ‘innovation plateauing’ in mobile hardware taking place over the next five years, and that would certainly work in Amazon’s favor. Its future devices are likely to require less cross-subsidy than the ones we’ve seen so far.”

But Amazon like isn’t making money on the Kindle yet, Markkanen told me.

“They need more scale, more revenue, and more margin,” he said. “For example, with Amazon Prime, Netflix only recently got margins to 10-15 percent — and Amazon Prime is still around 5-10 percent.”

There are signs of that happening soon, however, according to ABI, perhaps as early as 2014.

The Kindle Fire is by far the leading Android tablet on the market, having sold perhaps six million units last Christmas and capturing significantly more marketshare than other Android tablet during the holiday. All that hardware sold below cost is part of what is making Amazon’s margins so thin. According to Markkanen, that’s a defensive strategy to ensure that Apple and Google do not own its customers and present a barrier to Amazon’s growing digital commerce.

The question is: How much could all that digital commerce be worth?

Exact sales figures on Kindle are hard to get — mostly since Amazon does not release them. But the company did say Kindle Fires accounted for 22 percent of the U.S. tablet market in 2012, and the Kindle Fire seems to compete well against the iPad Mini. ABI calculates the Kindle Fire installed base as between 11 million and 12.5 million units as of the end of 2012, which could then translate to some $400 million a year in sales. That’s revenue up in the Amazon Web Services area. But it’s not here yet.

And of course, Amazon’s strategy is not just about its own hardware — it’s also on every other platform. In fact, Markkanen estimates that Amazon has amassed about 180 million downloads from the iOS, Windows Phone, and Android app stores for its Kindle, Price Check, and other apps.