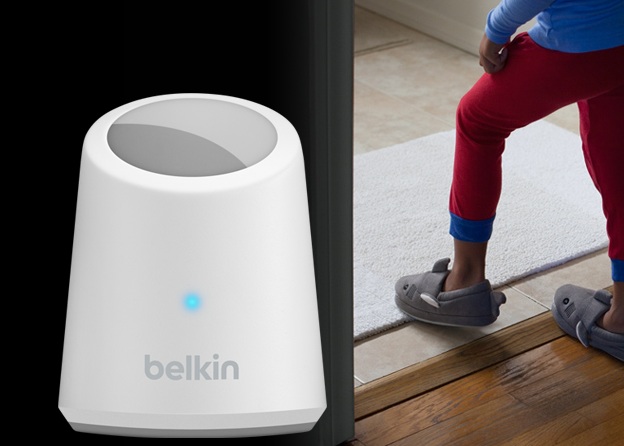 Home automation technologies have been promising to change our lives for decades: We’ll be able to control our entire homes from one place. Finally, Wi-Fi and mobile devices may be able to deliver on that promise. But Belkin’s WeMo line of products shows we’re not there yet.

Belkin, best known for its computing accessories, cases, and routers, is the home-automation company to get widespread distribution of these types of devices.

I’ve been testing its WeMo Switch + Motion (the company sent me a loaner for review purposes). The package includes a Wi-Fi-capable wall switch and motion sensor. They can be used independently or together. The devices can be controlled through an iPhone app. (Android is not currently supported.) Belkin also sells the devices separately.

In my primary test configuration, I have the motion sensor set to turn the light in my home office on when I enter the room. After the sensor detects no motion for a while, it automatically turns the light off.

The big problem with this setup is that neither the motion sensor nor the switch has an ambient light sensor. The light goes on even during the middle of the day when the room is otherwise bright. Even if that problem were solved, $100 is a lot to address such a problem. (I can also turn the light on or off with my iPhone.) The other challenge for home lighting is that it doesn’t control overhead lights, but Belkin introduced a new switch at CES that will add that functionality.

The best uses will likely come from more complex tasks. Belkin supports integration with IFTTT, which lets you incorporate the motion sensor and switch with Internet-connected services. For a short time, I configured the WeMo sensor to tweet that I was in my office when I walked into the room. (Tip: Not even tech savvy people want to see that.) A friend uses his WeMo motion (in conjunction with IFTTT) to send him a message whenever his kid comes home from school.

I’ve been at a loss to come up with other meaningful uses for the WeMo, especially uses that justify the expense. The packaging for the switch shows WeMo being used to remotely control an iron and a curling iron; those uses seems downright dangerous to me.

It also feels like an incomplete product. The hardware has required numerous firmware updates.

At its current price, it’s hard to recommend. At half the price, it would be a lot more interesting.

Austin-based startup Ube is also working on this problem. At VentureBeat’s Demo 2012, the company won a People’s Choice award for a planned line of home automation products, including a wall outlet and wall switch. Those products are scheduled to be released in the second quarter, according to Ube’s Web site.