No other company besides Disney could make Disney Infinity. Aside from the obvious, the amount of resources it can pull together for this upcoming platform is staggering.

Disney Infinity is essentially an open-ended Grand Theft Auto sandbox with a Minecraft/LittleBigPlanet creative component that you can use to make their own content. You can unlock new characters, items, worlds, and more by placing stylish collectible figures and chips onto a special base. And everything is wrapped in the family-friendly ethos of the Disney films and theme parks.

Infinity launches this June for PC, all major home consoles, and mobile platforms. Leading up to the summer, the House of Mouse is making a big push to establish this new brand (read: money machine). It officially unveiled Infinity this week at the classy, Disney-owned El Capitan Theatre in Hollywood, Calif. John Lasseter, the chief creative officer at Pixar and Walt Disney Animation Studios, was on hand to talk about Infinity’s emphasis on play and creativity.

I had a chance to preview the game and learn about all its different elements. I came away with one main conclusion: Regardless of how you feel about conspicuous consumption or one company owning so many different things, you must admit that something as ambitious as Disney Infinity is only possible because one conglomerate owns all this: 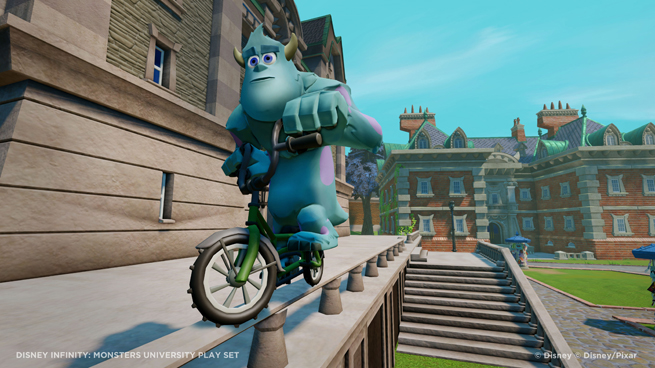 Walt Disney studios: It’s no coincidence that Infinity and the upcoming Monsters University film are both coming out in June — and that the game features characters and stages based on the movie. Expect this to become the norm whenever a new high-profile Disney flick comes out. Instead of having to spend two or three years making a standalone movie-game tie-in, developer Avalanche Software can just make a new set of levels and characters to expand Infinity.

Executive producer John Vignocchi explained to me that Disney hooks Avalanche up with unprecedented access to filmmakers like Jerry Bruckheimer (Pirates of the Caribbean), Tim Burton (The Nightmare Before Christmas), and their teams.

Talk about going to the source for authenticity.

The type of audiences that Disney commands from its motion pictures is tremendous, and now each of those viewers is a new potential customer to try an inspired interactive experience with Infinity. How many people are fans first of Spyro the Dragon and other characters from the rival Skylanders series and then get into the games second? Compared to all those for the beloved Disney franchises, not many.

Since Avalanche is able to draw from all the Disney-owned properties, what else might we see in the game? One of the add-on vehicles available at the event was the Electric Mayhem bus from The Muppets. Does this mean we might see some Marvel Avengers or Star Wars content when Disney releases those blockbusters in the following years?

“The possibilities are infinite,” Vignocchi said. 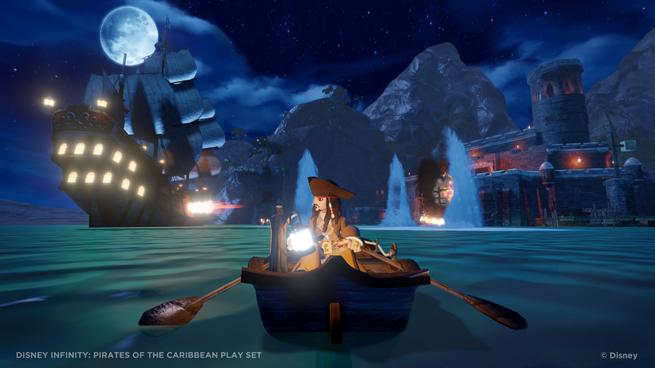 Parks and resorts: Picture the iconic Sleeping Beauty castle from Disneyland with a Finding Nemo underwater twist. Now, swap out the coral decorations for some neon-laced Tron trim. Add a constantly growing interactive world around it and you start to get the idea. These are the kind of images Disney showed us to promote some of the creative potential for players using the Minecraft-inspired level-editor Toy Box.

The theme park connection is also visible in the Play Sets. These are what Disney calls the different in-game worlds (each with mission-oriented gameplay) that players can unlock with Play Set figures. The Pirates of the Caribbean level we saw had a couple of visual references to the classic ride. As Captain Jack Sparrow rowed a boat under archways and between vessels exchanging cannon fire, I instantly thought of the Disneyland attraction. No one had to tell me. The park experience is that ingrained in me, and that can be a powerful way to connect with customers 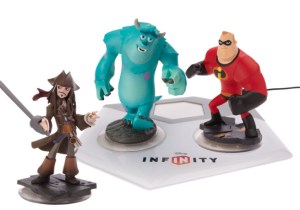 Consumer products: “We’re all game developers,” Vignocchi said. “So while we hoped and dreamed, since the inception of Infinity back in 2010, that we’d have this line of collectible figures that went with it, none of us know how to make toys.” That’s where Disney’s massive Consumer Products division comes in. This is the group that manages the mountains of official Disney licensed stuff in stores.

They help us “identify factories that we we’re going to work with for manufacturing, make sure that we’re delivering the correct file formats to the various factories, quality assurance, working with the FCC. …” said Vignocchi.

Disney’s Imagineering and other research teams also served as consultants to the special figurine technology that Avalanche conceived of. Those teams are also helping to develop what future versions of the base reader (what you use to connect the toys up to the game) can do.

Club Penguin: With user-generated content, fans inevitably will try to make levels featuring swastikas, marijuana leafs, penises, four-letter words — you name it. Hell, some rogue Disney animators even inserted a picture of a topless woman into The Rescuers. That’s apparently the kind of thing some people will always do given creative freedom.

To keep the game environment family-friendly, Disney is bringing in some pros to vet the levels that players submit. The customer support staff from the popular online children’s game Club Penguin (which reportedly has over 30 million registered user accounts) will sort through submissions and weed out the inappropriate ones before players can download any of it for Toy Box mode.

Club Penguin is aimed at kids ages 6-14 and has been around since 2005. I cannot imagine a group of people who have more experience cleaning up online f-bombs and hate speech than the folk who work there. 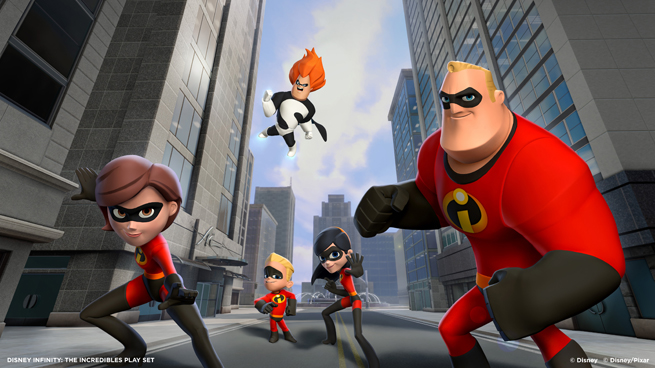 Avalanche Software: A quick glance at this developer’s portfolio shows that the people there definitely know how to make solid licensed games. They’ve been crafting them since Disney acquired the studio in 2005. More intriguing is the Octane development engine that they’ve been adding to for the past 11 years.

“Right now, I know that we have well over 60 different mechanics in the game,” said Vignocchi. “Whether that’s melee combat to sword fighting to projectiles, driving … it is on par with some of the biggest games out there, like Grand Theft Auto, and it is a ‘family game.’”

This foundation is essential for Avalanche to make each Play Set feel different. The Incredibles level involves a lot of superhero fighting and robot smashing, while Monsters University is more focused on stealth to scare students from rival Fear Tech. The Pirates of the Caribbean world featured galleon customization and naval gun battles. These certainly aren’t cookie-cutter platformers. Considering how many developers treat the stable cash-in of licensed properties, it’s refreshing to see Avalanche go the distance. “As game developers,” Vignocchi said, “our mantra is, we kind of take a page out of Pixar’s book, we create games for ourselves but that are accessible to kids.” 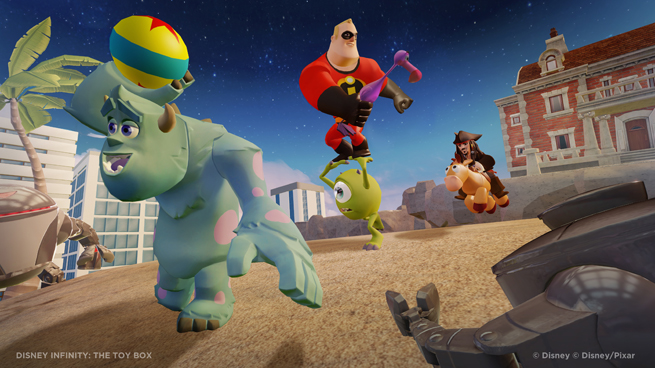 That focus will ultimately benefit fans since the freedom in Toy Box mode turns them into game makers. In a demo video, we saw how quality assurance staff could change the camera angle to 2D for a working Donkey Kong arcade game level. Another person re-created the Bowser’s Castle race track from Mario Kart 64 that players can actually drive on. When you add in the programming logic items that enable aspiring level designers to add and chain together triggers, doors, moving platforms, and more, the potential is pretty promising. Disney plans to foster user creativity by holding themed contests.

It’s that emphasis on play and imagination that appears to ground Disney Infinity. So much of this corporate synergy is a bit mind-boggling. The business model is classic Disney (movie tie-ins, collectible trinkets and toys, and so on), but it’s the gameplay that will determine whether Infinity is just a massive cash-in or the title that could finally establish Disney Interactive as a formidable, traditional game maker.