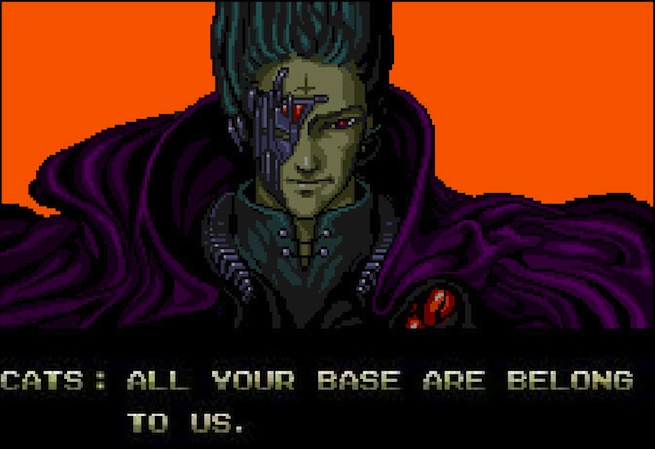 Our rundown of the funniest Xbox 360 Achievements and PlayStation Trophies continues. We’ve already looked at failure, murder, and meta stuff, and now we’re getting referential. People love it when things reference other things; that’s one of the only ways to explain why Family Guy is still on. It’s not surprising, then, that some designers can’t help but work some fan service into their awards.

Fable: The Journey — “I Used to Be an Adventurer”
Value: 10G
“Then I took an arrow to the horse. She’s all better now, though.”

We’ll start out with an obvious one: Like Cats from Zero Wing (at top), the 2011 role-playing game Skyrim’s throwaway bit of dialogue about the unfortunate history between arrows and the knees of every guard in the land launched a thousand Internet jokes. Developer Lionhead Studios decided to get in on the fun. You unlock this Achievement by healing your in-game horse of three arrow wounds, which is probably a little harder to do while rolling your eyes.

Did we even think twice about crowbars before Half-Life came out? I mean, they’ve always been cool, I guess. They have that curvy bit at the end and the straighter bit at the other end, and they come in pretty handy if you need to remove some nails or open a wooden crate. And hey, did you know that Friar Laurence called for a crowbar to break Juliet out of her tomb at the end of Romeo and Juliet? That was over 400 years ago. Gordon Freeman was totally ripping off Friar Laurence, you guys. 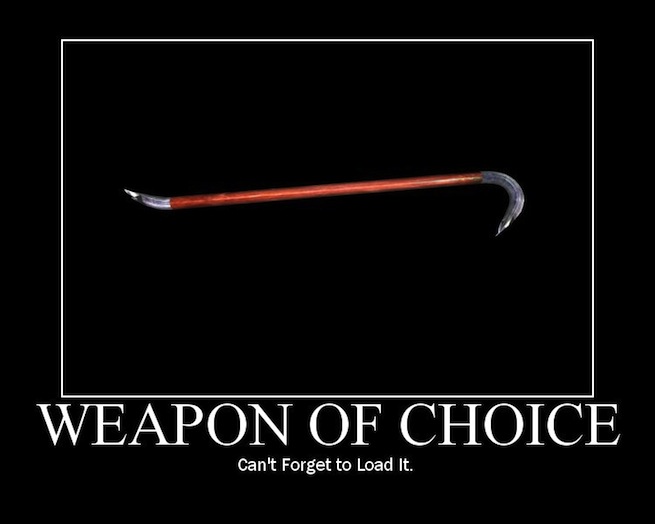 DJ Hero 2 — “Hot Swedish Action”
Value: 20G/Bronze Trophy
“In any Battle, get an A for Scratching, a B for Taps, a B for Crossfading, and an A for Freestyling.”

Give it a minute … do you see it? ABBA doesn’t even have any songs in DJ Hero 2, so I guess the developers are just big fans.

Dead Island — “How Many Days, Exactly?”
Value: 10G/Bronze
“Play Dead Island at least 28 days after starting it for the first time.”

The zombie genre loves to reference itself (see also the Achievement battle between Valve and Capcom). But this reward puts in a little extra effort in its nod to Danny Boyle’s kinda-sorta-undead film with a little patience and some console-clock wizardry.

Happy Action Theater — “I Know Now Why You Cry”
Value: 10G
“Submerge yourself in lava.”

Developer Double Fine designed this game specifically for younger children. But this Achievement is clearly for the parents playing along unless we have 2-year-olds running around who have seen Terminator 2. It’s just as well that I don’t have any kids — I don’t know how I’d explain to them why I suddenly crumpled into a heap of sad when this notification popped up.

Don’t judge me. That cyborg understood human emotions, and then he died.

Cute Achievements about the number of zombies you’ve put back in the ground are a tradition in the Dead Rising series, but this is probably the most adorable of them all. Fans of Mel Brooks’ work will recognize the reference to his sci-fi spoof Spaceballs, in which Planet Druidia’s King Roland demonstrates that he is well overdue for a seminar on network security.

I have no idea how a reference to Capcom’s first Resident Evil game found its way into the Achievement list for a Kinect port of a Wii dance title based on director Randal Kleiser‘s fourth-best movie, but I’m glad it did.

Developer Digital Extremes could have gone the well-trod “Who you gonna call?” route on this one and made essentially the same joke, but that wouldn’t have earned them a place on this list. Defeating the final boss in The Darkness II’s Vendettas co-op mode unlocks this reward, which basically works as a test of how old and geeky you are. If you recognize the Ghostbusters’ phone number when you see it, you … well, maybe you don’t “win” so much, but this Achievement/Trophy is for you.

Gears of War — “My Love for You Is Like a Truck”
Value: 30G
“Defeat a Berserker on Hardcore Difficulty.”

I played Epic Games’ love letter to waist-high walls on Hardcore just so I could unlock this Achievement, which takes its name from this scene from Kevin Smith’s movie Clerks:

The Lego games are full of silly references like this one, but “Solid Snape” is by far my favorite. I think it’s the image of a race of supersoldiers that are clones of actor Alan Rickman that does it. They’d just be so sardonic.

Point-and-click adventure games like the Monkey Island series are about, well, pointing and clicking. On everything — including, in this case, the same wad of already-chewed gum that you need to make hero Guybrush Threepwood “nom” on nine times in a row to unlock the Trophy. It’s a gross idea, sure, but the award’s namesake (from Charlie and the Chocolate Factory) chewed a piece of gum for three months straight, and you didn’t hear her complaining.