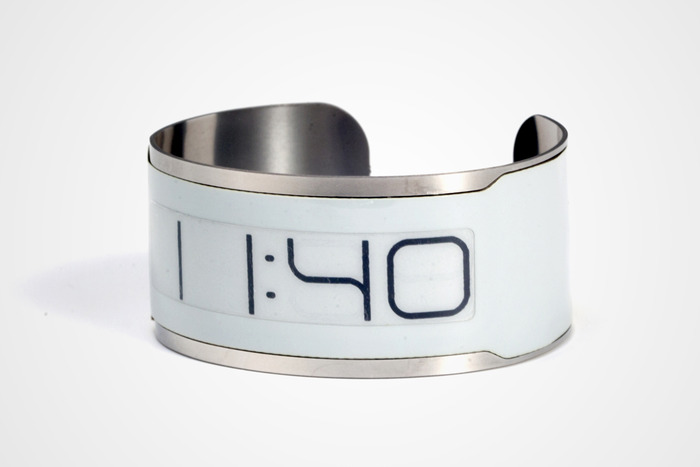 The world’s thinnest watch, made from razor-thin aluminum, the absolute minimum of electronics, and an E-Ink display, has now reached 250 percent of its funding goal in just a few days.

The CST-01 is just .8 millimeters thin — an astounding .0314 inches — and weighs just 12 grams, less than half an ounce. And it does precisely nothing but tell time, sort of the opposite of the other famous watch to hit the big time on Kickstarter, the Pebble.

“Everyone has crowded around this smart watch market,” project cofounder Jerry O’Leary told me. “But there hasn’t been any innovation in the actual timepiece itself. We thought: What if instead of adding as much as we can, we took as much as as we could?”

So with cofounder Dave Vondle, the two IDEO designers built an intensely minimalist watch. It’s nothing more than a “time embedded in a band,” as their Kickstarter project page suggests. 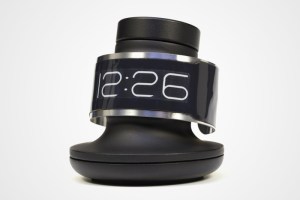 Above: The CST-01 sits on its charging station.

Where Pebble, which raised over $10 million on Kickstarter, went big on customizability and apps and APIs and features, Vondle and O’Leary wanted a wristwatch that was thin, flexible, robust, and stylish — and not much else. In fact, nothing else.

“We wanted to redesign a timepiece from the ground up,” O’Leary says. “So we went back and looked at what’s unique about E-Ink … and we fell in love with those qualities.”

The previous thinnest watch in the world, the pair told me, was a .98 millimeter watch by Concord, created in the 1970s. Called Delirium, it was fully mechanical, not electronic, and so delicate that it could not be worn: The case would bend if you strapped it to your wrist. It was an “engineering marvel,” Vondle says, but it also cost about $15,000. And, of course, you could never wear it.

In contrast, the CST-01 is made of durable stainless steel, with its tiny components shoehorned into a tiny .5 millimeter “pocket” etched into the band. It’s electronic, powered by a micro-energy cell that can be recharged 10,000 times and lasts over 15 years. It has no buttons or knobs of any kind (all time-setting is done on the charging station). And it costs only $99, if you get in on the Kickstarter campaign.

Which happened almost by accident, according to the project leaders.

“We kinda backed into the Kickstarter campaign,” O’Leary says. “We were invited to CES by E-Ink, so we thought we had to time it and actually launch something in conjunction with the show. Essentially, we used it as a deadline.” 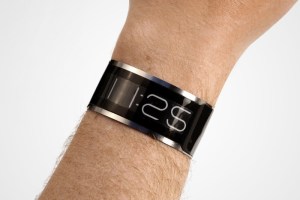 Above: Also available in black …

The initial goal was $200,000 in funding, the “bare minimum,” according to Vondle. At that amount, the pair would have been able to built the watch, but they would have had spare components littering their homes and workshops afterward due to minimum order quantities for some of the components. As a result of going over $500,000, the project is starting to hit its sweet spot, and the projected quantities are now actually closer to what Vondle and O’Leary wanted to produce.

The watch will be assembled in the U.S., O’Leary told me, and some of the components will be produced locally as well.

“Right now, we’re talking to several US-based manufacturers, and signing non-disclosure agreements, so we can start doing some assembly,” Vondle said. “The majority of the product will be manufactured here and assembled here.”

The pair won’t disclose how high they think the Kickstart funding will eventually grow (“we’re superstitious about that stuff”) but they did say that they are considering other product options, such as sizes.

Whatever amount the campaign raises, backers can expect to get their world’s-thinnest watches in September of this year.