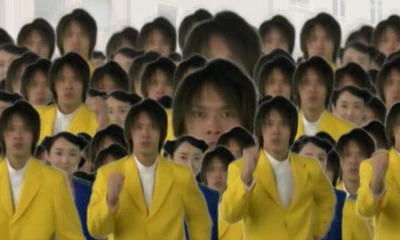 It’s called Tokyo Crash Mobs, the latest puzzle game on the Nintendo 3DS eShop from developer Mitchell Company — and it is insane.

The developer compounds the loopiness of the human-chucking gameplay with a visual style that combines the sensibilities of animated GIFs with the production values of the Adult Swim program Tim & Eric Awesome Show Great Job!

It’s set up where each stage is named after a day of the week, and you do something slightly different each “day,” but it’s basically just a match-three title that uses people instead of blocks and a line to a night club instead of an empty playing field.

I recommend you give it a shot.

The visuals and FMV sequences

I don’t want to jerk you around. You’re gonna play Tokyo Crash Mobs, if you play at all, for the preposterous graphics. It uses real actors as the basis for the in-game scenesters (that’s what it calls them), which gives the whole thing a very surreal and stupid look.

On a few occasions, I actually blurted out “This is so dumb!” while playing, but that’s a good thing.

That is what the developers were going for. You don’t make a game about tossing people if you aren’t going for a dumb-in-a-good-way vibe.

Everything between the levels is also an absolute delight. It uses short FMV movies with the live-action characters to set up the levels. Of course, they make no sense. The blonde lady is sitting alone in a lecture hall and is sad. Sometimes she falls asleep, and then the Asian character comes in and watches her. Am I making any sense? Because I shouldn’t be.

It’s a riot. After each level, it awards you a medal for your performance. I always receive the bronze medal which features the character hanging their head in total shame.

We don’t get these games in the States, so maybe the novelty is lost on its native Japanese audience. But I’m from the suburbs. I don’t recognize anything about Tokyo Crash Mobs, and I love that. 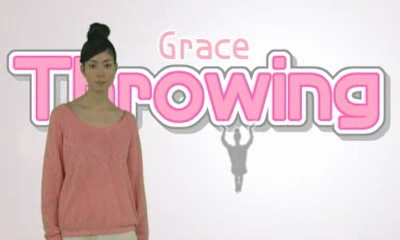 Above: Grace is one of the controllable characters in Tokyo Crash Mobs. In here levels, the player must throw the scenesters.

The visuals work, but they work better with a game that is actually pretty fun to play. As I said, it’s basically just a match-three puzzler and a pretty good one for a $5.99 eShop download.

The base gameplay is usually all about zapping away the scenesters and stringing together combos, but the levels rotate different takes on that ideas. This keeps things fresh and interesting.

When I beat a particularly hard level, I didn’t want to put the game down because I knew the next stage was significantly different. This messes with your comfort level and keeps the game engaging.

As satisfying as the gameplay is, I really feel like the developer missed an opportunity by not including multiplayer. The basic game echoes classic battlers like Tetris Attack and Puyo Pop, and those games made their money with their competitive modes.

I think Tokyo Crash Mobs has enough going on to justify a purchase, but it’s just disappointing that you can’t take on some friends in head-to-head matches.

I haven’t really felt this way about a game since WarioWare, Inc.: Mega Microgames! for the Game Boy Advance.

When I play Tokyo Crash Mobs, I feel like I’m starring into a beautiful mind riddled with attention deficit-disorder and a love for awkward public access television shows. I don’t understand anything that’s happening, but that’s kinda what makes it fun.

Add on top of that a decent gameplay mechanic and a developer that knows how to keep things interesting, and you have a game that is easily worth its asking price.

Is this the best game on the 3DS? No … I don’t know. Like Crashmo, I’d rather play Tokyo Crash Mobs than just about any smartphone game.

Tokyo Crash Mobs is available now for the 3DS in the eShop for $5.99. The publisher provided GamesBeat with a 3DS eShop download code for the purpose of this review.