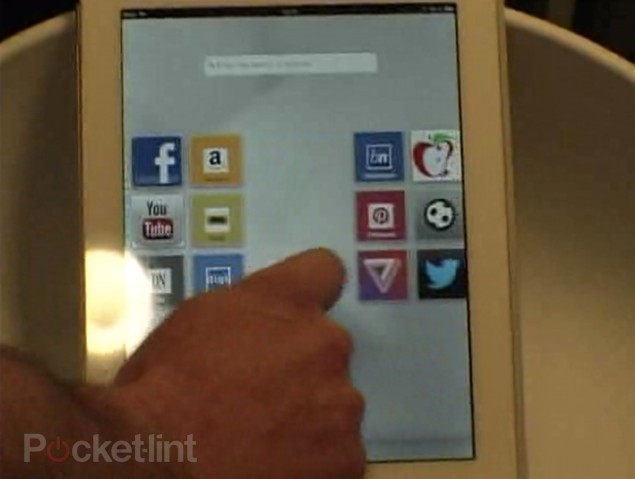 Next up from the web browser maker Opera: A new browser that aims to take full advantage of mobile and give the company a significant foothold on iOS and Android.

It’s called Opera Ice, and it could end up being one of the most significant moves the company has ever made. Opera was initially planning to announce the mobile-focused browser next month at Mobile World Congress, but the crafty folks at Pocket-lint has nabbed an internal video demonstration that lays out all of the details.

Opera Ice will do away with most of what we expect to see in mobile browsers: There aren’t any buttons, menus, or even tabs. Instead, the entire interface will rely on touch gestures.

“This is a full touch and tablet-focused browser,” said an Opera product manager in the video. “Most are taking a PC browser and squishing [it] into a tablet, or they are taking a mobile browser and blowing it up to fill the space.”

Instead of relying on Opera’s Presto engine, which powers Opera Mini and Mobile, Opera Ice will use the WebKit framework (currently used by Apple and Google for all versions of their browsers). Opera Mini relied on the Presto Engine, but also pushed web pages through the company’s servers to optimize them for mobile devices. With Opera Ice, the company is finally focusing on delivering a pure mobile browsing experience to take on mobile Safari and Chrome on Android.

The company isn’t giving up on Opera Mini, but it seems clear that Opera Ice will be its new focus for smartphones and tablets. Opera chief executive Lars Boilesen noted that Mini is still important, but it’s not a “fully-fledged offering” like competitor mobile browsers since it still doesn’t work properly with many websites.

Opera Ice will be released on iOS and Android in February, and the company also plans to release an updated desktop browser in March.