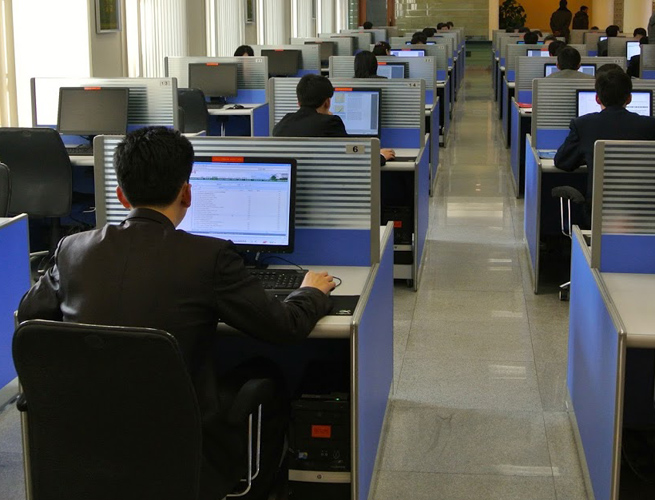 Google chairman Eric Schmidt attracted headlines recently for visiting North Korea, but he had been shy to talk about it. Today he finally opened up about the trip in a carefully worded Google+ post. His daughter had some interesting things to say too.

North Korea has a fraught relationship with the United States and many other countries around the world, so Schmidt’s visit with a delegation led by former New Mexico Governor Bill Richardson was an uncharacteristic development. North Korea hardly gives its citizens access to the Internet and censors what they know about the outside world. Schmidt said the delegation advocated for the country to open up the Internet, which would help its economy and citizens.

There is a supervised Internet and a Korean Intranet. (It appeared supervised in that people were not able to use the Internet without someone else watching them). There’s a private intranet that is linked with their universities. Again, it would be easy to connect these networks to the global Internet.

They also demonstrated their software and technology based on open source (mostly Linux) and it was obvious to us that access to the Internet and all of this was possible for the government, the military, and universities, but not for the general public.

As the world becomes increasingly connected, the North Korean decision to be virtually isolated is very much going to affect their physical world and their economic growth. It will make it harder for them to catch up economically.

We made that alternative very, very clear. Once the Internet starts in any country, citizens in that country can certainly build on top of it, but the government has to do one thing: open up the Internet first. They have to make it possible for people to use the Internet, which the government of North Korea has not yet done. It is their choice now, and in my view, it’s time for them to start, or they will remain behind.

Funny enough, Schmidt’s daughter Sophie was also with the delegation and shared her own thoughts on the trip online. She was far more descriptive than her father about the strangeness of the place and in some the experiences the delegation had while visiting.

On the visit in general:

Our trip was a mixture of highly staged encounters, tightly-orchestrated viewings, and what seemed like genuine human moments. We had zero interactions with non-state-approved North Koreans and were never far from our two minders (2, so one can mind the other). The longer I think about what we saw and heard, the less sure I am about what any of it actually meant.

Top takeaways from the trip:

Ordinary North Koreans live in a near-total information bubble, without any true frame of reference. I can’t think of any reaction to that except absolute sympathy. My understanding is that North Koreans are taught to believe they are lucky to be in North Korea, so why would they ever want to leave? They’re hostages in their own country, without any real consciousness of it. And the opacity of the country’s inner workings — down to the basics of its economy — further serves to reinforce the state’s control.

The best description we could come up with: it’s like The Truman Show, at country scale.

On likely being bugged:

We were told well ahead of time to assume that everything was bugged: phones, cars, rooms, meetings, restaurants, and who knows what else. I looked for cameras in the room but came up short. But then, why bother with cameras when you have minders? After a day in frigid Pyongyang, I was just thankful it was warm.

On power dying on the subway:

In a fantastic bit of timing, as we exited the train, the station’s power cut out. The commuters around us immediately pulled out flashlights, which they presumably carry all the time. Can’t win ’em all, minders.

On visiting the library at Kim Il Sung University (pictured above):

All this activity, all those monitors. Probably 90 desks in the room, all manned, with an identical scene one floor up.

One problem: No one was actually doing anything. A few scrolled or clicked, but the rest just stared. More disturbing: when our group walked in — a noisy bunch, with media in tow — not one of them looked up from their desks. Not a head turn, no eye contact, no reaction to stimuli. They might as well have been figurines.

Sophie also posted photos from the trip on Picasa.