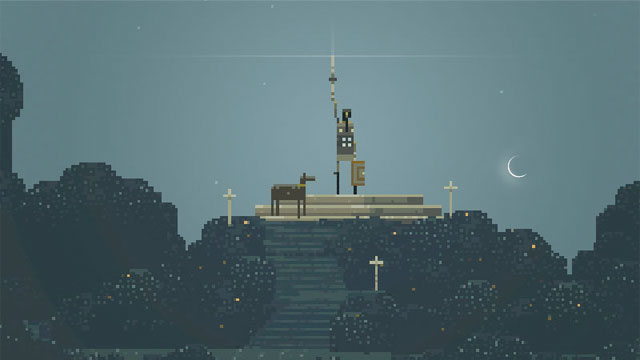 You can’t make money on Android. That was a common belief in early 2012 among developers, and it was probably true. Developers complained about more pain (fragmentation) for less gain (weaker monetization) than Apple’s iOS platform offered. Reports suggested that for every dollar studios generated on iOS, they only produced 24 cents on Android.

By some measures, those numbers have tightened, and the studios that found success on iOS are porting software to Google’s mobile operating system. Capybara Games did exactly that with its Superbrothers Sword & Sworcery EP. At one point, the help section on Sword & Sworcery’s webpage explained why the game would never come to Android. Now that the game is available on Google Play, GamesBeat asked the developer how things turned out.

“We’ve been really happy with Sworcery on Android so far,” Capybara Games president Nathan Vella told GamesBeat. “The combination of being part of the amazing Humble Indie Bundle for Android 4 — alongside some of the raddest Android games — and a great feature on the Google Play Store resulted in pretty solid download numbers.”

Capybara decided to introduce the Android version of its 2D adventure game in a Humble Indie Bundle. The Humble Bundles are a collection of games sold under a choose-your-own price model. The Humble Android Bundles nearly always introduce a handful of games that are completely new to the platform.

A few weeks after the bundle, Capybara released the game on Android’s Google Play market. That store prominently featured the game in one of its prime front-page slots.

“The fact that the Android version has only been out for four weeks on the Google Play Store and has been downloaded well over 50,000 times goes to show that, while we’re not talking about a sales landslide, especially in light of a game like Temple Run 2’s iOS mega-numbers that came out today, there’s still room for cool paid games on Android,” said Vella.

That’s what Android users want to hear — a developer making interesting games who thinks room exists on Android for paid games. I asked Vella if he thought porting it to Android was worth it.

“When I get asked, ‘Was it worth the effort,’ I can’t help but chuckle a little,” said Vella. “We partnered with Apportable, an amazing company whom we were introduced to by Will Turnbull of Humble Indie Bundle and our pals from Hemisphere Games, makers of OSMOS. We’re busy as hell with Super Time Force — our next title, coming to XBLA — and other unannounced projects, so taking people away from those games to port wasn’t an option. Once we were officially partners, Apportable had an alpha version playable in no time.”

Developers won’t abandon the lucrative iOS platform for Android any time soon, but for people who prefer a Nexus 4 over and iPhone 5, they’ll be happy that Android was able to turn around a developer that once wanted nothing to do with it.