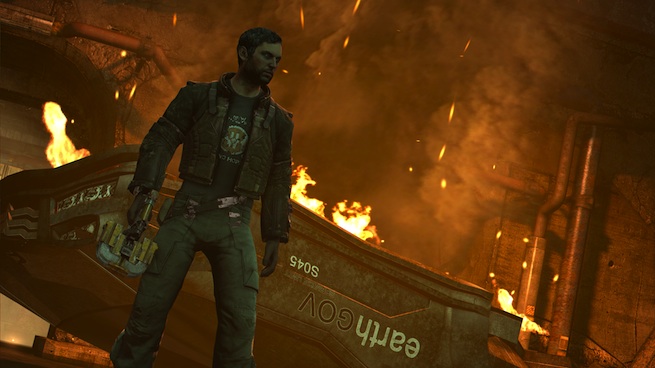 After playing through the first two Dead Space games, I thought I had the series figured out. Watch the vents, aim your weapon around dark corners, and have one finger ready to temporarily slow down enemies with the stasis ability.

I was wrong. The beginning chapters of Dead Space 3 plays with your expectations, setting you up in familiar scenarios only to throw you in an unexpected direction.

In developer Visceral Games’ Dead Space 3 (out Feb. 5 for Xbox 360, PlayStation 3, and PC), the disgusting necromorphs and the mysterious “Marker” monuments from whence they came are back, bringing with them new monstrosities that can kill protagonist Isaac Clarke and his (optional) cooperative partner John Carver in brutal and horrific ways. Much like how sci-fi heroine Ellen Ripley couldn’t escape from the xenomorph threat across four different Alien films, Clarke is inextricably tied to the undead mutants that have plagued his life since the first Dead Space came out in 2008. Here’s what I learned after running through the first three hours of the campaign at a recent event in San Francisco.

Coming out of retirement

Isaac Clarke is not the same man he was in Dead Space 2. He managed to finally free himself from the dementia (and the eerie hallucinations that served as quick gameplay thrills) that the alien markers caused, though he can still interact with the artifacts if he needs to.

“He is very much an expert in Dead Space 3 on the effects of Markers,” explained David Woldman, the senior producer at Visceral Games, to GamesBeat. “And throughout the plot of Dead Space 3, Isaac [uses] that knowledge to directly help the party that he’s a part of [and] to help people understand what’s going on. He tries to impart some of that experience to the crew of the mission this time around.”

After an unspecified amount of time following the end of Dead Space 2, government soldiers literally pull Isaac from his apartment into a conflict he clearly doesn’t want any part of. Religious extremists known as Unitologists have been attacking all the Earth’s colonies because of the government’s experiments on the Markers, and they want to unleash its mysterious power to bring about a (probably disastrous) event called “Convergence.” 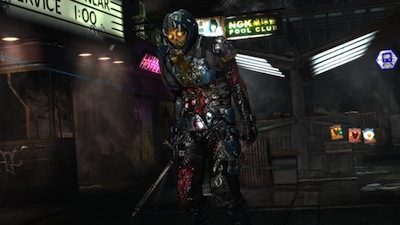 The first 20 minutes or so has Isaac running from these Unitologists. You shoot at them like in any other third-person shooter: by crouching down and taking cover. Historically, Dead Space is not a typical cover-based shooter, and I didn’t I didn’t really care for these moments — it didn’t have any of the fun experimentation you have when devising ways to take out the necromorphs.

From there, it quickly transitions to a setting all Dead Space fans will recognize: a derelict and abandoned spaceship. Wide corridors, anti-gravity rooms, and, yes, plenty of vents from which the creatures to attack you are there for you to explore. This is also where the new weapon crafting system appears (it’s only in designated areas), in which you use different pieces and materials you pick up to make your own, customized guns. Even if you aren’t satisfied with your creations, you can dismantle them and make a new one without losing any of the parts.

“We really wanted to reinforce Isaac as an engineer,” said Woldman. “We thought that sure, you could walk through a world and pick up a gun that’s on the ground and keep going. But we kind of wanted the player to be able to sort of MacGyver their way through it and really favor and cater to player choice. So if you wanted to have a shotgun, and I wanted to have a line gun, or an energy-based weapon or a flame thrower, there’s really nothing in our fiction that’s prohibiting that.”

The snow-covered planet of Tau Volantis from previous Dead Space 3 trailers wasn’t a part of the preview, but from the dialogue cues, it sounds like it’s the next place you’ll travel to.

Killing necromorphs in half the time

At the same event, I replayed through the first four chapters again with the drop-in/drop-out online-only cooperative multiplayer mode. Whether it was because my partner (taking over the role of grizzled soldier John Carver) and I already knew what was coming, or because of the extra help and firepower a second player brings, we blew through the demo much faster, finishing it in a little over an hour.

If you don’t play with someone on co-op, Carver just sounds like an asshole. He stands by in the background with other members of your group during cutscenes, shouting one or two snide comments to Isaac whenever they meet. He’s less of a dick when killing necromorphs alongside you in co-op, where the two characters actually have conversations that sometimes reveal small details about the plot or the situation they’re in. Woldman promised that by the end of the game, you’ll “really understand where [Carver] is coming from” and why he turned out the way he did. 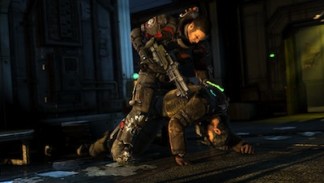 One nice thing I noticed is that each player has their own inventory — while you can give items and weapons to one another, you don’t need to fight over for the loot dropped by necromorphs or found in various containers. When you see your partner pick something up, the item will still be there for you to grab as well.

The other major change in coop is puzzles. During my first run through, I had to turn on a power source by using Isaac’s telekinesis tool to pull down three large machines and then repeatedly twist their respective switches to turn them on. In coop, the couplings don’t lock down by themselves, so you must have one person hold it down while the other rotates the switches. But this leaves you vulnerable to a large group of necromorphs scurrying to your position, so you need to act fast and defend one another while completing the puzzle.