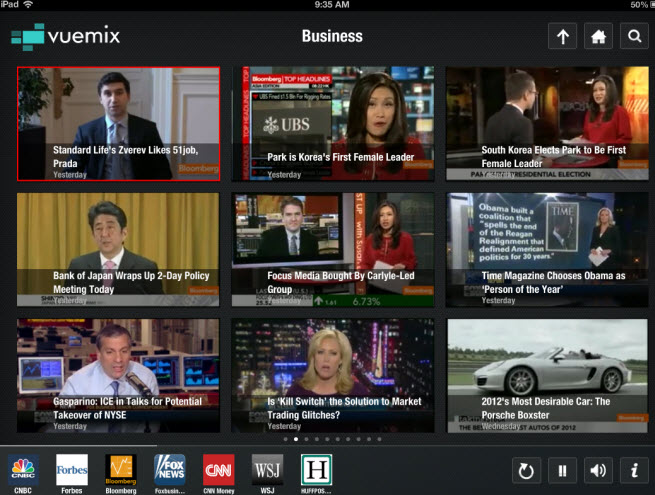 If you feel like it takes too long to surf through video channels to find what you want, then Vuemix has an app for you. With the new Vuemix iPad app, you can play nine videos on the screen at the same time so that you can figure out which channel you want to watch more easily. And it does so without choking your Internet bandwidth.

Available today for the iPad in the Apple iTunes App Store, Vuemix is the latest app to take advantage of cloud computing. It takes a variety of Internet video sources and mixes them together into a single video stream in a web-connected data center, or cloud. Then it sends a single video stream to you with nine videos embedded within it.

“All the videos come in and we mix it on the fly,” said Govind Kizhepat, the chief executive of Vuemix, in an interview with VentureBeat. “It’s a brand-new primary technology to search, browse, and share videos on the web.” 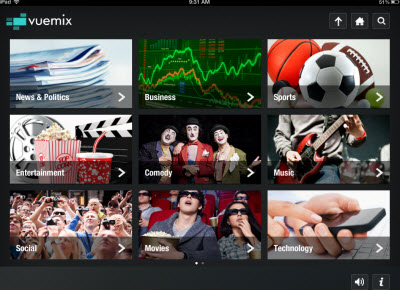 This streaming technology with multiple active video windows lets you see what is happening on each web video channel, much like the picture-in-picture function that is available in most televisions. But Vuemix takes that function to its limit by enabling you to watch nine videos side-by-side. It also organizes them for you, grouping videos into sections (see picture at right) such as Sports, Movies, Fashion, Technology, News, Comedy, Entertainment, Social, Music, Business, and more.

You can tap one section to drill down on it, and then Vuemix gives you with nine different choices within that category. If you pick news, you can see videos from CNN, Fox News, NBC, and more. You can upgrade your app for a $2.99 in-app purchase after a “try before you buy” period. The app works with version 5 of Apple’s iOS operating system.

It has a limit to how much you’ll see at once, in terms of how long the videos play for. If something is being livestreamed, then Vuemix can’t turn that into a live screen on your iPad. But once a video is posted, then it is up for grabs.

Vuemix plays about 45 seconds of video for each of the channels showing at any one time. Kizhepat figures that gives you plenty of time to decide which one you want to watch. The iPad is capable of playing just one video at a time. So when Vuemix plays a video, it may be a single stream of a single channel, when you are watching just one show, or it may be a single stream that mixes a bunch of videos into a single stream, like when you are looking at nine videos playing at the same time. If you hover over one video, the audio engages.

Yahoo, Google, and other video companies crawl the web for video. Vuemix does that, too, but it goes a step further. It indexes the pages, but it also grabs the videos and indexes them continuously. Then it separates the videos into categories. Extracting video is an extremely complex matter, Kizhepat said.

“We have a sophisticated browser emulator in the crowd to grab the videos,” he said. “Once it is grabbed, it is indexed. Then, once it is indexed, we cache it. Caching has been around for a while” with companies such as Akamai. But as a user, you click on a video and they send you one video stream. With Vuemix, the videos are dynamically transcoded (converted instantaneously) in the cloud and mixed into a single stream. It changes the formatting from HTML5 to Flash or another format, as needed.

“That’s all happening in the cloud,” he said.

You can search through your Vuemix videos the same way you do a text search. You enter the topic that interests you and choose from the videos that are playing. You can view multiple videos of the search results simultaneously, without having to click through video after video to find the one you want. You can tap on one video and expand it to full screen at high resolution. When you do so, Vuemix connects the user to the web site (such as YouTube), which then serves the video to the user. In this manner, Vuemix’s video infrastructure hands off the user to the video content owner. So when you use internet bandwidth to view a video, you use the bandwidth of the content owner, not Vuemix. That keeps Vuemix’s costs low.

Kizhepat said his company is working with multiple TV service operators to bring its technology to “second screen” experiences for subscribers. In this scenario, the second screen (the iPad) can act as a remote control. Those deals could roll out in the second half of the year. In that role, Vuemix could become a white-label service for those operators. On top of that, it will operate its own consumer apps.

“Vuemix will change the way people search, view and consume video content,” said Kizhepat. “By being able to view multiple videos simultaneously, the Vuemix platform not only delivers a custom interactive experience that is not possible using today’s conventional video platforms, but also makes video searching and browsing a lot quicker.”

You can also build your own “mix” to share with Facebook friends. You select your own favorite videos and share the collage of videos on your Facebook wall with one click. That means you can become a re-broadcaster of video content, and other people can subscribe to your broadcast. You can mark your video mixes as public or private. Web broadcasters will like it because Vuemix will deliver views to those broadcasters, Kizhepat said.

“The cable and satellite operators will love this,” he said. “You will see the electronic programming guide [on your TV] turned upside down.”

Vuemix also gives content owners the ability to create a customizable multitile video experience for each consumer. Kizhepat says that gives the channel owner a chance to significantly increase the time that a person stays engaged with it. The platform conforms to web and HTTP standards. It generates video formats dynamically depending on the receiving device of the consumer. The company plans to expand to iMac, Android, and Windows devices. Vuemix has to change its app depending on the screen size you are using.

Kizhepat is a pioneer in consumer audio and video compression. He previously led NetXen, a 10G Ethernet chip company that was acquired by Qlogic. He was also the founder of iCompression. Other members of his team come from Qlogic, Netflix, Akamai and a variety of other web and media companies.

Kizhepat started research in early 2010 and then incorporated the firm in 2011. Vuemix has raised $3 million in two rounds, including a seed round and a Series A led by a top-tier venture capital firm, Kizhepat said.