In its latest transparency report, Google showed that in spite of governments’ increased requests for information on citizens, the company is actually turning over less user data than ever before.

As the stats show, the past 12 months saw around 21,000 requests from government agencies, including judges and police, for Google-held data on users between July and December of 2012. That figure was around 12,000 for the same period in 2009.

However, the company is complying with a smaller percentage of those requests. In 2009, it turned over user data for around 76 percent of requests; last year, that number dipped to 66 percent, an all-time low.

Google reps say the increase in requests has a lot to do with the overall increase in Google’s reach and scope. More people around the world are using more Google services — Gmail, YouTube, web search, Google+ — to do more things than they were in 2009.

For most of the fulfilled requests, around 68 percent of them, Google produced user data in response to a subpoena. In a further 22 percent of cases, Google received a search warrant from a judge. The remainder, a Google rep stated in a blog post on the report, were “mostly court orders.”

Google turned over information in 88 percent of U.S. requests — that’s the highest percentage for any country’s government. Other governments, such as Turkey and Russia, saw compliance in single-digit percentages or no compliance at all.

Here’s a country-by-country graph we made for ya: 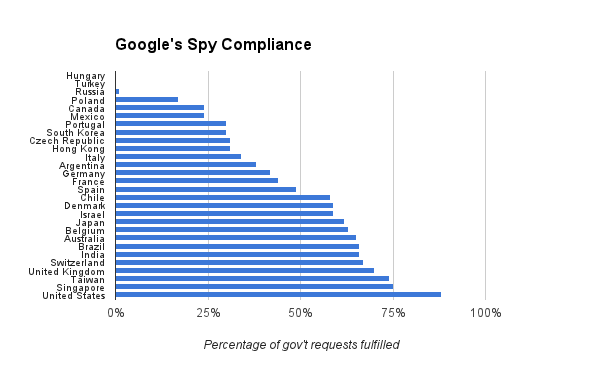