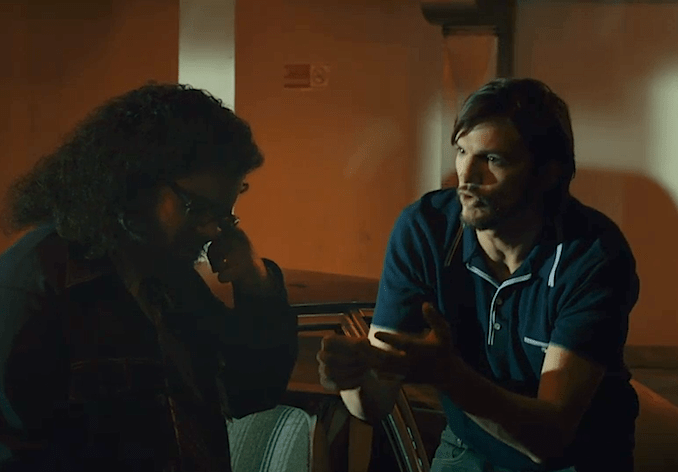 jOBS, the biopic of Apple co-founder Steve Jobs — whose ruthlessness and design-savvy created his celebrity — debuted at the Sundance Film Festival this weekend, and the reviews are mixed.

The biopic stars Ashton Kutcher as Jobs and Josh Gad as Apple co-founder Steve Wozniak. It will be released to the public on April 19, though you can watch a minute-long teaser now.

Reviewers are going back and forth on the actors’ portrayals versus the historical accuracy of the movie. Kutcher got everyone talking about his physical likeness to Jobs after the movie team released a photo of Kutcher’s Jobs sitting next to a “THINK” post. According to reviews, he pulls off Jobs well, capturing his mannerisms and tonality in the movie itself.

But while the actors might make you believe, Jobs-fans may call the movie out for not sticking to Apple canon.

Another point raised: It seems the movie heralds Jobs for his work but might over-exaggerate how meaningful certain moments were — such as when he unveiled the iPod — to accent his significance.

Let’s take a look at the reviews:

The Next Web on the accuracy of Kutcher’s portrayal:

“Kutcher’s Jobs has the hunched, rolling gait of the man, and the kinetic nature of his hands. His flat, piercing stare and clipped delivery works almost perfectly throughout. Even if you’ve spent an enormous amount of time listening to or watching Jobs, you’ll be impressed with his overall performance. There were a few moments where he dropped out of cadence in his speech and such, but the impression that I got on the whole is that he got it right.

I know that his performance as Jobs will get a lot of attention, especially as there are many alive who still have their memories of him fresh in mind. But it’s a fantastic, if not wholly factually accurate, performance by Kutcher.”

“Only Gad, as Wozniak, gets a scene standing up to the great man — as Woz quits Apple, he criticizes Jobs for losing his humanity amid a single-minded pursuit of making great products. It’s something even Jobs’ staunchest admirers have to wrestle with, and the film could have used more of that.

Others will write of the things “jOBS” omits, gets wrong, or simply avoids. My primary disappointment was in how shallow the film felt, given the extensive historical record. In the early days Jobs’ co-workers had to wrestle with a man who smelled bad, who cried often, who yelled constantly, who missed deadlines, who overspent his budget by millions. … There is great drama to be found in all that, but it is not to be found in the saccharine ‘jOBS.'”

The Verge on jOBS’ set and costumes success:

“The production and costume design are astounding, and it’s not just Kutcher wearing nearly every iconic Jobs outfit (the suspenders, the bowtie, the turtleneck, etc) throughout the film. The filmmakers were able to use Jobs’s childhood home — the legendary “garage” where Apple started — and it really sells the first third of the movie to see it around the iconic location. The offices and fashion play to each era — big glasses, bigger hair, slacks worn high — even if it isn’t necessarily what the individual actually wore in real life. Woz may never have worn that tie, but someone in the 70s did.

The movie is littered with small details of lore that should make Apple fanatics happy.”

Hollywood Reporter on the omission of important details:

“By accentuating the sweet spot that combines the Apple origin story with the drama inherent in Jobs’ struggles to grow and maintain control of his company, Whiteley and Stern [screenwriter and director respectively] get the best return on investment — but at the expense of some important details, including his initial introduction to Wozniak and any specifics about Woz’s personal history. As the two are developing the first Apple computers, the omission of discussion about the operating-system software needed to run the machines also is puzzling.”