GamesBeat: Is there anything you didn’t like about the original BioShock?

Bleszinski: I felt that the setting was a little oppressive for me, as much as I love it. I have this whole underground theory. I’ve thought back on Gears 2. You worked underground in the Locust lair for too long. That’s why we cut out the section of DLC that later appeared, where it was more underground.

When you’re playing a game, psychologically, being underground … it wears you down. I don’t know what it is. Maybe we’re just raised to know that being six feet under is bad or something like that. In that movie The Descent, being underground is very scary. Being underwater like that, it applied some of the pressure of the game, but it was slightly alienating as far as the setting.

Which is why, as scary as the fear of heights is going to be, I’m actually more excited for Infinite because it looks like gorgeous blue skyboxes everywhere. Big, flowing vistas. It’s what I think makes Halo so great. Yeah, the landscapes look great, but half the game is outside, and all these skyboxes are gorgeous. 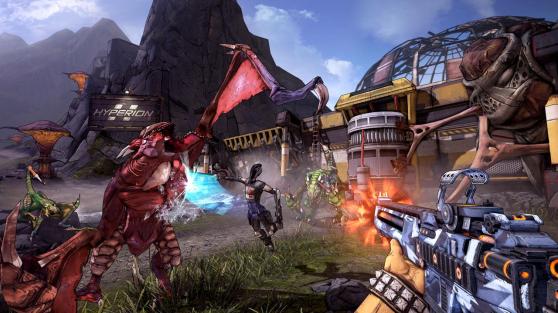 Bleszinski: I’m loving it to the point where I saw the magic formula. Every [role-playing game] pulls this although every RPG does it to a different extent. Basically, they keep it to the point where you’re strong enough that anything can wear you down to a certain point but not do too much, and then you level up for a little while, and then you’re kicking their ass until the new bigger enemies come along, and then they’re harder to kill. There’s that cadence that’s been going on since Ultima and everything. Even Skyrim had it to some extent, right?

Anyway, we co-opped a great deal of the way through [Borderlands 2]. The universe is amazing. The writing is just great. Claptrap could have easily been an annoying character that everybody hated, but he turned out to be one of the most beloved. It puts the fun in a postapocalyptic environment, which is really hard to do. But I got to the point where the game started feeling a little grindy for me. I haven’t gone back to it yet, but I probably should at some point considering they’re all dear friends of ours.

Bleszinski: You want to talk about Resident Evil?

GamesBeat: Sure, we can talk about Resident Evil. You want to talk about 6 specifically? It’s not a traditional shooter, but —

Bleszinski: I know, I know. I even talked to Capcom about [Resident Evil 6]. I’m sure they’ll figure things out.

The stupid little Slender Man game was a thousand times scarier than anything I saw in the four hours that I’ve played so far of RE 6. It’s all about that nuance and subtlety that Silent Hill 2 nailed. Even the original Resident Evil had a lot of it. It’s even cheaper to do that!

It’s like the shark not working in Jaws. You didn’t see it that often, and therefore, it became more suspenseful. It’s all about that tease of the monster. Is he there or is he not? That’s the powerful stuff that people sign up for with horror. But this stuff [in RE6] is all action. Nothing feels scary to me in 6 at all.

Bleszinski: I thought the zombie A.I. was actually pretty cool — the way they crawl along and dodge your attacks a little bit, things like that. Visually, it was quite good. The set pieces are cool. The quick-time events were used a bit too much, maybe, but a few of them were nice.

I think doing the multiple campaigns is a very good idea. I just think they should alternate between something like a Leon and then a helpless character, so you get this feeling of empowerment, and then you feel threatened, and you keep alternating between those. In my opinion, that’s good pacing for a game like that.

GamesBeat: Any other games you want to talk about?

Bleszinski: I’m going to go back to Far Cry 3. Far Cry 1, for me, I wrote off as just, “Hey, here’s a game to see if your PC runs well.” Far Cry 2 I barely played because I heard it was the game where you had malaria and nobody wants that. Tom Bissell, who’s my friend and who’s a great writer, says that I need to play it and that it’s one of the greatest games of all time, but I’m just like, “Look. I’ve moved on.”