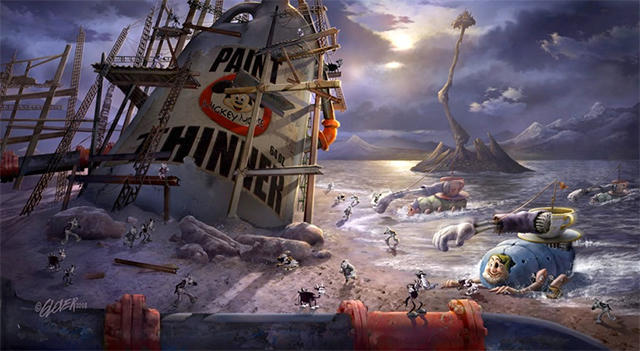 Junction Point Studios, the developer behind the Epic Mickey series of platformers for consoles, has shut its doors and terminated all employees.

A Disney spokesperson confirmed the closure with a statement sent to GamesBeat:

It was with much sadness that we informed our teams today of changes to our games organization, which include the closure of Junction Point Studios. These changes are part of our ongoing effort to address the fast-evolving gaming platforms and marketplace and to align resources against our key priorities. We’re extremely grateful to Warren Spector and the Junction Point team for their creative contributions to Disney with Disney Epic Mickey and Disney Epic Mickey 2.

Junction Point developed just two games: Disney Epic Mickey and last year’s sequel, Disney Epic Mickey 2: The Power of Two. While the original sold over a million copies, the sales of the sequel are disappointing. Game-sales tracking firm The NPD Group told GamesBeat that Epic Mickey 2 sold over 529,000 copies in its first two months. (We originally reported a number from the L.A. Times that had it at 270,000 in sales for one month).

Famed game designer Warren Spector founded the studio in 2005. Spector made a name for himself with first-person titles that incorporated role-playing elements, like the original System Shock and Deus Ex. It was a surprise to many when Disney bought his studio and put it to work on a Mickey Mouse game.

Leaked concept art showed up online before Disney even announced the original Epic Mickey. Those early images, like the one above, revealed a darker, grittier world than the one Junction Point would ultimately create.

Disney has been shifting its gaming business toward less hardcore experiences. The media giant recently revealed Disney Infinity, which allows consumers to buy a potentially endless supply of characters and accessories that can all play together.

Warren Spector commented on the closure of his studio on Facebook. “Yes, it’s true,” Spector wrote. “The Junction Point journey is over. To all those who’ve asked, or want to ask, I’m sad but excited for the future. JPS had a good eight year run. I got to work with some amazing people on some amazing projects. I’ve had some of the most magical times of my life, fulfilling several life-long dreams. I’ve gotten to know Disney fans and Disney cast members, gotten hands on with Disney’s history, walked where Walt walked. Magical really is the only word.”

You can read his full statement here.