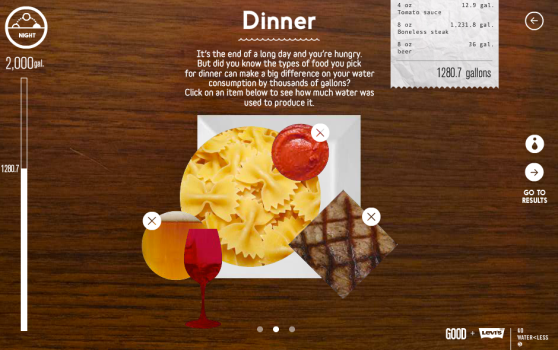 Julia Gifford works with the Draugiem Group, a Latvian incubator.

Infographics have enjoyed large-scale popularity over the past few years as an accessible means of data visualization. And with good reason. Infographics were great for displaying large amounts of data, making sense of complex information, and engaging readers more in the discovery of new patterns.

But those days are over. Now, infographics are being replaced with an even more visually appealing, effective, story-telling agent — the interactive infographic.

Ross Crooks, the creative director of Column Five, an agency, saw this coming. He wrote about the death of the traditional infographic well over a year ago, predicting that the future would lie in making infographics interactive. Props to him, because a year later we see that he was right. Over the past year we’ve seen visually stunning, animated, and interactive infographics pop up around the web.

This new interactive infographics differ from static infographics in that they let the viewer interact with them, discovering more on their own. They include elements such as animations and clickable links, which increase the viewer’s engagement as well as the credibility of the infographic itself.

But the phrase “interactive infographic” is a hassle. How about if we call it what it is: a “webgraphic.” That’s right, we’re coining a term.

Why webgraphic? Because an interactive infographic by definition must contain code. That means, instead of being a static image, it’s embedded in the web.

Some might argue that the concept of the webgraphic was technically realizable many years ago, but they have really only surfaced in the past year.

This is the result of responsive design, an increase in technical capabilities, browser improvements to accommodate hardware acceleration to better support animations, and the availability of more options at designers’ fingertips, courtesy of HTML5, CSS3, jQuery, and increased computing capacity.

Not to mention the accessibility of interactive infographics on tablets, considering that mobile devices account for a growing segment of Web usage in the U.S. and internationally.

Infographics, in comparison to their interactive counterparts, help people focus their attention. By contrast, the narrative thread of interactive infographics can walk users through a series of steps, delivering information to help the viewer come to a conclusion.

Additionally, because the webgraphic is coded straight onto the web, it has the bonus that it can contain links to outside sources for increased interaction, credibility, and usefulness. This is all in comparison to a static infographic, which is simply an image.

A great example of using webgraphics to illustrate a point is the Daily Dose of Water webgraphic, which gives you helpful stats and lets you calculate your daily water use.

The benefit of your visual content being embedded on your page is that viewers will be directed to your website. This brings awareness of your URL. Later on, this can be beneficial in manipulating your visitors, converting them, and retargeting advertising to them later.

Locating a webgraphic on your web site has one primary benefit: Anyone sharing your amazing content will be directed to your site. The Future of Carsharing does this well. While this webgraphic provides interesting content, at the end it also links images to the parties who were involved in the creation of the webgraphic. It also includes a “share” banner at the top, which allows the webgraphic to be easily shared on social platforms (which then, of course, brings in more potential traffic).

One minus that must be addressed is that webgraphics are less user-friendly on social networks than static infographics. Because the webgraphic is embedded on a different webpage, the viewer has to leave the social platform in order to access the webgraphic. But once you get the viewer there, it opens the door to a world of possibilities in terms of converting the viewer to a customer.

The ability of integrating the webgraphic to a website has immense benefit to conversion rates. Infographics can only bring about brand awareness by putting their logo in the bottom, etc. However with a webgraphic you have so many more options.

Because of the ability to code the webgraphic, you can direct your reader to fulfill a goal. For example, DeskTime — one of the companies I work with at the Draugiem Group, a Latvian incubator — successfully added a “sign up” button at the bottom to capture interested potential customers. This is where you can take advantage and implement every conversion rate optimization trick in the book.

Because the webgraphic is on your site, you can add a re-tartgeting pixel to your site, and use it to target ads to people who have already checked out your webgraphic and are presumably interested in your topic.

Designers and marketers alike have understood the added benefit of interactive infographics. Those who are serious about getting the biggest return on investment have understood that the webgraphic is the way to go.

Julia Gifford is a Canadian-born Latvian technology enthusiast. She enjoys writing, and is currently with the Draugiem Group. You can find her on Twitter at @julijagifford.

Top image: A still from the Daily Dose of Water webgraphic.