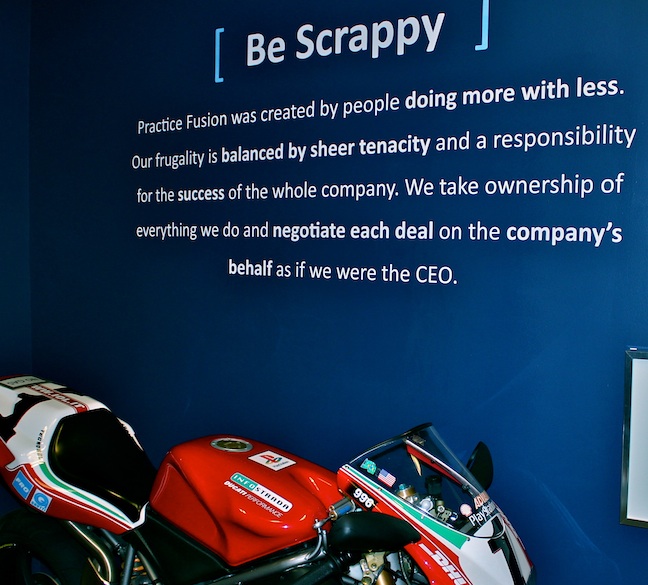 This is the latest in a series of stories about startup culture. This week, our reporter checked out Practice Fusion in San Francisco, a stark contrast to Twilio’s fast-paced work ethic, and Couchsurfing’s laid-back hippie culture.

If CEO Ryan Howard hadn’t been involved a serious motorcycle accident, Practice Fusion would have crashed and burned years ago.

Howard was knocking on investors’ doors to fund his free electronic health record (EHR) with little success. Doctors were reluctant to ditch paper-based systems, so it seemed to the VC crowd like the right idea at the wrong time.

But unwilling to admit defeat, he used cash from the settlement from his motorcycle accident to pay the salaries of three employees.

“We were going out of business, I needed two root canals, and I was in massive debt,” said Howard in an interview at the company’s sprawling San Francisco office. “I would define the period of 2005 to 2007 as me, in my pajamas, furiously working in my house.”

In 2009, Congress passed the Health Information Technology for Economic and Clinical Health Act. With the Obama administration committed to the proliferation of EHR’s, Practice Fusion caught the attention of a band of angels, including investor Peter Thiel, the managing partner of Founders Fund. Thiel recently declared: “Practice Fusion revolutionizes our interactions with the medical community, just as Facebook did for social networking.”

Thiel saw an opportunity to take advantage of a government mandate that push doctors to adopt an EHR. The fixed deadline is 2015 — after that, eligible health care providers who don’t comply will be penalized by CMS, the federal agency that administers Medicare and Medicaid.

With eligible doctors and hospitals receiving “meaningful use” checks for switching over to Practice Fusion’s free EMR,  it’s not a tough sell. Albert Santalo, the CEO of cloud-based EHR provider CareCloud, is a competitor but credited Practice Fusion for its “evangelist efforts” and creating “greater awareness of EHR technology by doctors in general.”

With new investment, Practice Fusion stacked up its sales team, and grew 500 percent for two years in a row. Last year, according to Howard, it turned over “serious solid revenue,” primarily through advertising. It recently had to revise its expectations for 2013, as a few weeks into the new year, the sales team secured its first million dollar advertising deal with a major pharmaceutical company.

Practice Fusion has about 150,000 users, including doctors, nurses and hospital admin, which is about six percent of the addressable market. Howard sees an opportunity to make money through the fast-growing store of data. Stripped of any personally identifiable markers, patient information can be sold to pharmaceutical companies.

He responds to a question about potential privacy concerns by listing the positive outcomes from mining data about doctors and patients. “We can recommend drug therapies based on their popularity [with previous patients],” he said, and claims there are 200,000 avoidable deaths a year because “data is simply not shared.”

This is in sharp contrast to online health portal WebMD, which is struggling to conserve its relationships with big pharma and recently laid off 14 percent of its staff. In its seven years, Practice Fusion has grown to over 250 employees, and has about 20 job openings. 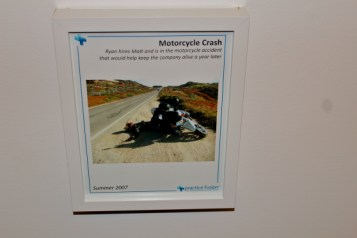 Employees at Practice Fusion’s office in downtown San Francisco are reminded every day about the sheer fluke that led to the startup’s existence.

“A great leader has to be vulnerable,” Howard explained. Photographs and news clippings from Practice Fusion’s past adorn the walls. I even saw a fading Starbucks napkin, a souvenir from the founding team’s first “office.”

The well-funded startup is in full hiring mode, but it’s looking for a specific type of employee to add to its team.

It may seem counter-intuitive, but the ideal job candidate, according to Howard, has little or no health care experience. In his view, employees that have worked in the industry for too long as less inclined to dream up big ideas, and the “unlearning” process takes too long.

Practice Fusion is looking for high-achievers, but it’s important to Howard that employees are “happy and healthy,” and fit in with the culture. During a walk through the company’s offices (his dog trailing behind), he told me about a seriously talented engineer who was recently asked to leave as he didn’t get on with the team.

New employees undergo an extensive training process, which involves several weeks of education on a range of relevant health care topics, such as meaningful use, billing, and the regulatory issues facing big pharma. Similar to larger companies like Google, Practice Fusion emphasizes professional development, and mentors assigned to junior-level employees ensure that they meet goals.

High-performing employees have the freedom to try their hand at roles in different departments — one staff member I met started out in the call center (this team cold-calls doctors to inform them about the free EMR) and later shifted into product.

Word of warning: If you love to pig out on cookies and soda, Practice Fusion is probably not for you. The kitchen is fully stocked with healthy and organic food, and it has no carbonated drinks.

“I believe you should be emotionally and physically at your best,” explained Howard, who also insisted on offering free weekly yoga and soccer classes for the staff. This focus on balance means the startup has been able to retain talent through its ups and downs.

In a recent end-of-year report from RockHealth and Interwest Partners, survey respondents predicted that Practice Fusion would be the most likely digital health company to IPO in 2013. The company raised a massive $34 million in venture funding in June.

For those that stayed loyal to the company from its early days, the bet is about to pay off.

What are the best perks? 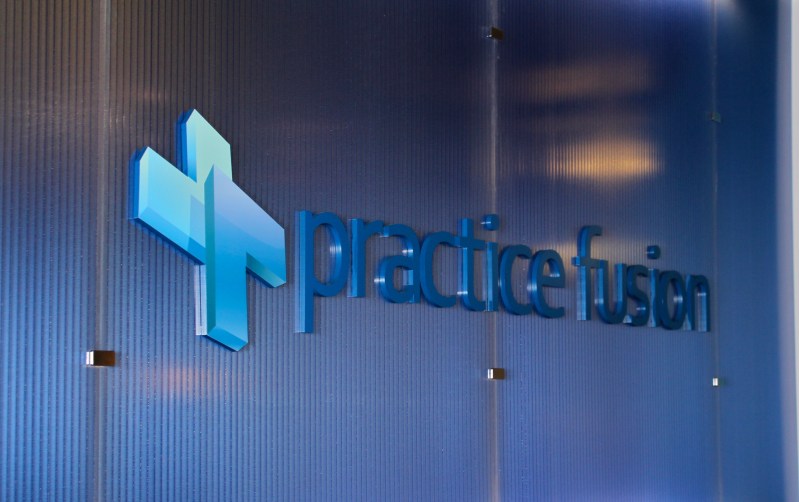 Above: The free EMR provider was founded in 2005.

“Startup culture” is a new series that highlights what it’s really like to work at a Bay Area startup. Please send your suggestions for the most rockin’ office spaces, startup happy hours, or company perks via email (christina@venturebeat.com) or Twitter (@chrissyfarr).