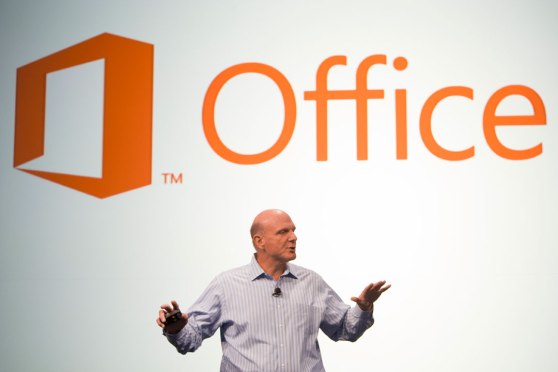 The unveiling of Office 365 Home Premium may be a giant step for Microsoft, but analysts say Redmond still has a long road ahead in its effort to regain consumer confidence.

The new Office 365, which became available yesterday, is a subscription-based version of Microsoft’s venerable, profitable productivity suite, with the addition of copious cloud-based features.

Microsoft had to make this overhaul of Office due to increasing competition from online productivity services such as Apple iWork and Google Drive.

Microsoft chief executive Steve Ballmer called it “Office reinvented as a consumer cloud service.” The cloud-based approach means that Microsoft can release updates more regularly rather than being stuck in a three-year release cycle.

For $100 per year, consumers and small businesses can access all the Office apps — Word, Excel, PowerPoint, Outlook, Publisher, OneNote, and Access — from up to five devices, including tablets, Macs, and PCs.

There’s also a subscription aimed at college students, called Office 365 University, which gives four years of access for up to two devices for $80.

In addition, Office 365 adds in the company’s InfoPath and Lync Online tools for instant messaging. Vanessa Thompson, research manager for analyst firm IDC, said those additions are minor but important updates, and bring the new offering in line with Google Apps.

But by adapting its product to how we work now — in the cloud and across multiple devices — Microsoft wants to recapture the consumer and small business market.

But will it succeed?

Analysts we contacted agreed that the low annual subscription fee and bonus extras (such as 60 minutes of free Skype calling, and an upgrade in SkyDrive storage from 7GB to 20GB) will appeal to consumers.

“Microsoft will need to go to great lengths to convince users that its online offering has feature parity with its desktop software,” said Phil Black, a program manager at the Urban Business Initiative, a group that instructs small businesses about new technology.

Black stressed the importance of offering “specific examples” for how users will be able to take advantage of the cloud-based features in the new release. He predicts that consumer adoption will be slow at first but will pick up as Microsoft learns to navigate the “tricky pathway” from desktop to cloud.

It’s also a smart move to offer a version of Office 365 aimed squarely at college students. It comes at a better overall price and lets students install the software twice. Microsoft will be able to build loyalty with a tech-savvy demographic that might otherwise experiment with Adobe, which is also jumping onto the cloud bandwagon.

The verdict? The low price will put downward pressure on competitors to offer equally high-quality services at an even cheaper rate.  Murphy said Microsoft’s commitment to the cloud is a “win” for consumers — “in many ways, Office 365 could be the rising tide that lifts all boats,” he said.

How about small and medium-sized businesses?

Analysts view this release as a means for Microsoft to get a “legitimate foot back in the door” with small businesses.

“Small and medium-sized businesses view the cloud as the future but were probably wondering where one of their most trusted vendors was when looking at options,” Murphy explained.

Thompson makes the case that the software as a service (SaaS) model and Lync integration puts the new Office 365 in line with Google Apps. However, “incentivising users away from a freemium competitor product that meets up to 80 percent of their needs is a consistent challenge for Microsoft,” she said. “Expect them to continually iterate on pricing and packaging.”

“IT departments know that Microsoft releases the first version of any software before performance and stability testing is truly complete,” he said, adding that Redmond will need to prove it is “truly committed to a hosted model of its Office software.”

The verdict? Microsoft has emphasized in messaging that the cloud-based Office is intended for consumers. As the company shifts focus, expect to see highly-targeted efforts to reach small businesses, who view cloud-based business technology as the future.