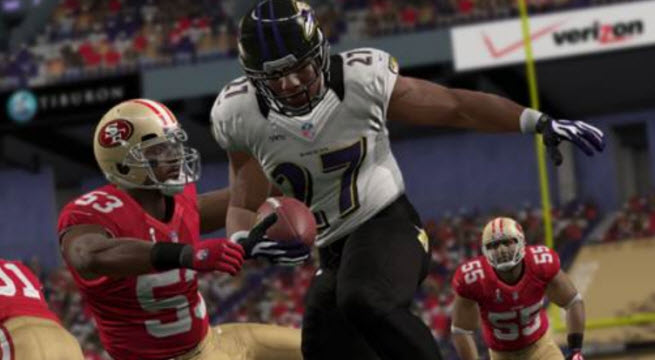 Electronic Arts reported earnings today that narrowly beat expectations for the third-fiscal quarter ended Dec. 31. Given the news in the game industry lately, it could have been a lot worse.

Redwood City, Calif.-based EA reported non-GAAP earnings per share of 57 cents a share, compared to 99 cents a year ago. Non-GAAP revenues were $1.18 billion, just shy of expectations. A year ago, revenues were $1.651 billion. Analysts expected 56 cents a share and $1.294 billion in revenues.

EA is one of the biggest independent makers of video games. Since its revenues are so large and it is diversified across so many platforms, the company is a bellwether for the health of the overall game industry. It is, however, still making the transition to digital revenues.

EA’s earnings indicated that the holiday quarter was weak for the whole industry, which is in transition as Nintendo ramps up Wii U sales and Microsoft and Sony prepare to launch new hardware.

“Despite a challenging quarter, we were able to deliver non-GAAP EPS at the high end of our guidance range,” said John Riccitiello, chief executive at EA. “We are investing for the future wave of growth that we foresee in digital and console.”

In after-hours trading, EA’s stock is down 1.19 percent to $14.90 a share, probably because EA guided lower for the full fiscal year. In a conference call, Riccitiello blamed the revenue shortfall on poor Medal of Honor: Warfighter sales and “industry head winds.”

EA grew by driving high-profit digital revenues and expense controls, said Blake Jorgensen, chief financial officer. Peter Moore, chief operating officer, said that EA was the No. 1 publisher on Apple’s iOS devices worldwide in 2012. He also said EA had six of the top 20 games in Western markets i n 2012, compared to four in 2011.

Before the earnings came out, analyst Arvind Bhatia said he was cautious about the stock in the near term, but he believes EA will benefit from new console launches and its diversified model in the long term. GameStop, the industry’s largest game retailer, had already reported weaker-than-expected earnings.

Michael Pachter, analyst at Wedbush Securities, said in a note before the call that he expected EA’s results to be driven by international sales of the FIFA Soccer and Need for Speed franchises.  He had expected third-fiscal quarter results of $1.33 billion in revenue and earnings per share of 61 cents. EA’s big releases in the third fiscal quarter were Medal of Honor: Warfighter, Need for Speed: Most Wanted, and catalog sales of FIFA Soccer 13 and Madden NFL 13 (pictured).

FIFA 13 sold 12 million units in the third quarter, up 23 percent from a year ago. FIFA 13’s digital revenue was above $100 million, up 98 percent from a year earlier. Total FIFA digital net revenue in the first three quarters of the fiscal year were $230 million.

For the quarter ending March 31, EA has four major titles in the pipeline: Dead Space 3, Crysis 3, Army of Two: Devil’s Cartel and Sim City. EA said both Dead Space 3 and Crysis 3 preorders are ahead of the preorders for the previous games.

EA’s mobile games and services generated $100 million in the quarter, up 18 percent from a year ago. EA’s Origin game downloading service has over 39 million registered users, including 17 million mobile users. Trailing 12-month non-GAAP digital revenue was $1.5 billion, up 37 percent.

EA has $1.5 billion in cash, but 60 percent of it is held offshore. (There are tax consequences to bring it back).