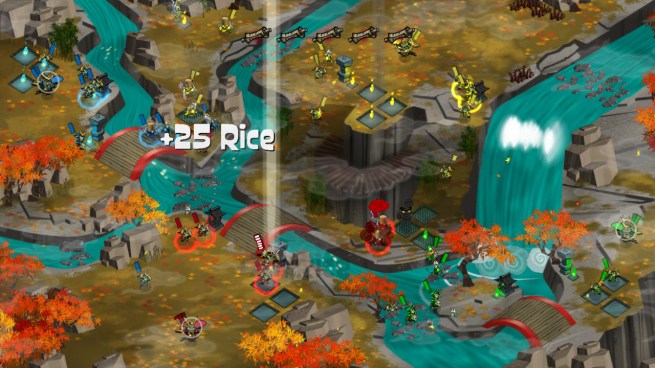 A turn-based strategy game can fall apart if a developer doesn’t know what it’s doing. Games like Nintendo’s Advance Wars and Fire Emblem make the concept of taking turns attacking one another on a battlefield seem simple, but beneath the rock-paper-scissors gameplay is a lot of perfectly balanced math.

You have to get the balance right if you want to make a decent strategy game. Skulls of the Shogun (out now on Xbox Live Arcade for 1,200 Microsoft Points) gets it right.

The story starts with a shadowy figure killing the famous General Akamoto, which sends him to the shores of the dead. The military mastermind quickly realizes that he’ll have to wait for several thousand years in a line before getting the chance to enter the gates to what is basically samurai heaven. Since Akamoto is not a patient man, he decides to recruit a ragtag group of soldiers to help him take the gate by force. That leads to many interesting battles and a lot of genuinely funny one-liners.

Skulls of the Shogun has three basic units: the defensive infantry, the fast cavalry, and the ranged archer. In addition to these basic soldiers, each army has a general. Generals are more powerful and get an extra action per turn. Finally, players also have shrines that can summon either a healing fox, a magic-spewing salamander, or wind-gusting crow. Units can eat the skulls of defeated enemies. Doing that gives them a boost to their HP and, if a single unit eats three skulls, turns them into a demon and gives them an extra action each turn.

Winning a level usually means defeating the enemy team’s general. It has a lot more to it than this, but I’m not gonna explain every rule here. I’ll just say that it isn’t complex. Everything makes sense. Skulls of the Shogun just gets out of its own way and lets the player focus on creating winning strategies.

Developer 17-Bit also put a lot of work into making sure it’s properly balanced. No unit is too powerful, nor is any unit completely useless. You’ll need a smart combination of all types of shoguns to win most of the battles. This prevents players (or the computer-controlled A.I.) from spamming a single tactic. Players need to experiment with different ideas on each level, which prevents it from growing stale.

I needed everything I learned to defeat the very difficult last level, and shifting tactics is a basic prerequisite for the human-versus-human multiplayer mode.

Speaking of multiplayer, Skulls of the Shogun has three options: a local couch mode where multiple players in the same room take turns, an online mode, and the Skulls Anywhere mode in which players can compete in a match asynchronously. Up to four people can play on a single map in these modes. It limits players to five commands per turn (even in the campaign), which really keeps things moving. That design decision can feel stifling, but it actually makes a lot of sense. Players won’t spend 45 minutes trying to perfect each unit’s movement; instead, they have to make the five best moves each turn.

The fun of multiplayer will extend as far as your skill level. If you’re not facing off against other players with similar abilities, you won’t have fun.

Of course, that’s not the game’s fault. It has all the pieces in place to offer a great time for turn-based strategy fans.

The story of Akamoto isn’t much more than an excuse for Skull of the Shogun’s existence, but the actual writing is very clever. Akamoto often exchanges verbal jabs with other generals before and during battles. These jokes include pop-culture references, creatively concealed cussing, and irreverence for the fourth wall.

I chuckled throughout these dialogue moments. Sure, saying “slug in a ditch” in place of “son of a b—-” is a cheap laugh, but Skulls can’t help but pull it off. It’s just so smart and charming.

I’m not sure it’s as well-written as a Nintendo game, like the Mario & Luigi titles, but it reminds me of that — and that’s saying something.

Unfair advantages for the A.I.

My first few hours with Skulls of the Shogun filled me with frustration. The problem is that it teaches you about new concepts by giving them to your enemy first. Did you know the general can attack twice in the same turn? Well, you can only do that if you beat the general that has that ability. Did you know that healing fox monks can eat three skulls to learn new spells and heal twice on the same turn? Skulls introduces this by starting the enemy off with two fully powered-up fox monks at the beginning of a stage.

This drove me crazy for about two hours. I would lose battles after 20 minutes because the A.I. general had abilities that I did not.

Eventually, I got over this by tuning down the difficulty and zipping through the earlier levels that relied on this asymmetrical design. The frustration eventually wore off, but the earlier stages are the least fun thanks to this.

Skulls of the Shogun locked up on me twice. It also has the tendency to hitch or skip a few frames of animation on a few levels. It’s not so bad that it hurts its overall appeal, but it’s worth noting.

Nintendo can release 11 Fire Emblems because the gameplay is timeless. It takes time to figure out if something has that quality, but nothing about Skulls of the Shogun immediately disqualifies it. It’s hard and unfair in the campaign, but that keeps it challenging. Beyond the gameplay, it’s just nice to look at. The battlefields are crisp, and the characters are interesting and colorful.

Skulls also made me laugh. I want more from this universe, and I’m hopeful that a core group of my friends will pick this up for the multiplayer.

17-Bit is simultaneously releasing the game for Xbox Live Arcade, Windows Phone, Surface, and Windows OS. I only got my hands on the Xbox 360 version, but I would imagine that it plays great on touchscreen devices.

Skulls of the Shogun is out now on Xbox Live Arcade, Windows Phone 8, Windows 8, and Microsoft Surface. The publisher provided GamesBeat with a download code for the purposes of this review.