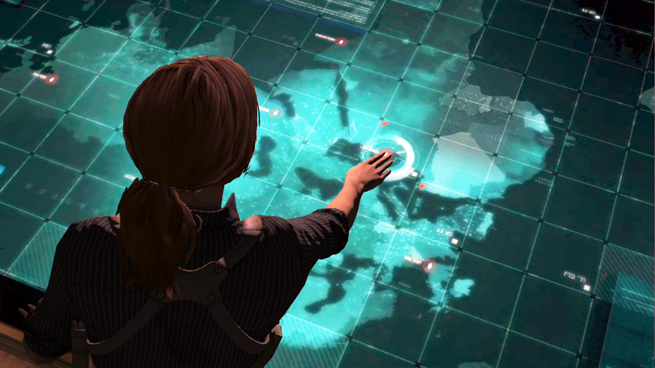 It’s the way things begin. Boot up, press start, go to the main menu. Nearly every video game ever made does this.

“My goal, and we’ll see if we’re able to do it,” says franchise creative director Maxime Beland, speaking about Splinter Cell: Blacklist, “I’d really like to ship the game with no main menu.”

He has plenty of time before Blacklist’s Aug. 20 release date (for Xbox 360, PlayStation 3, and PC) to make that goal a reality. Whether it’s too big a departure from comfortable, well-known tradition remains an open question. But Beland’s game already has the infrastructure in place to support a menu-free approach, and it’s called the SMI.

Series protagonist Sam Fisher — brought out of retirement to end a cataclysmic threat by a terrorist group calling itself the Engineers — now leads rapid-strike team Fourth Echelon from their airborne mobile HQ, the Paladin. Its command and control room houses the Strategic Mission Interface system, and the SMI puts the entire game at Sam’s — and your — fingertips. 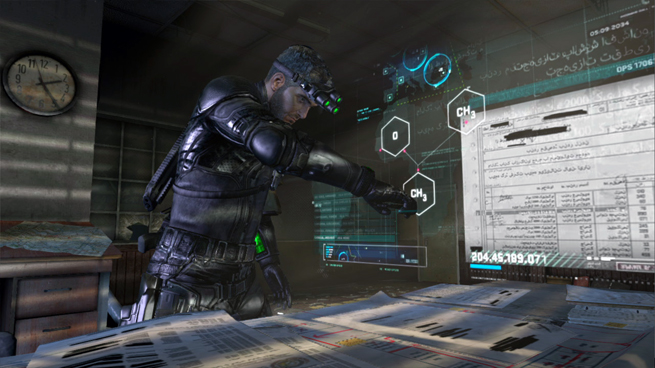 The monitors in the C&C show leaderboards and active countdowns from the Blacklist — the Engineers’ announced targets. Accessing the central table brings up a world map that gives you a complete overview of the game and all the missions Sam can do. All of them.

“Instead of only showing you single-player stuff, it’s showing you single-player missions, multiplayer, co-op, and adversarial missions that are possible all at the same time,” says Beland. “It also shows your friends what they’re doing, what missions they’re in, if they’re in a co-op or adversarial mission. Some of our co-op missions are also playable in single-player. So you can see that a friend is in a co-op mission all by himself, and you’re one button away from joining his game.”

Why get rid of the main menu? Simple: It’s in the way. “This is a game about Sam Fisher,” says Beland. “You’re Sam Fisher. You’re in your plane, you’re in Fourth Echelon, you’re looking at the status of the world on your SMI, and you can jump in or out of anything.

“We’re blurring the lines between our game modes.”

From an immersion standpoint, it’s a very interesting approach. You never break character to go into a menu. You access everything exactly as Sam does, including something Beland doesn’t mention: side missions — a first for the series. 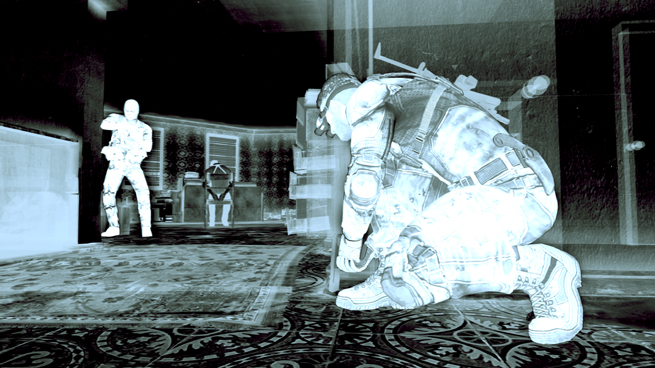 While on the Paladin, Sam can wander around and chat with his core team, Mass Effect-style. That includes buying upgrades through returning character Anna Grímsdóttir — like bumping up the C&C to help locate secondary objectives in the campaign levels, or building up Paladin’s crew quarters for more gear in the field — and picking up side missions to earn the cash you’ll need to pay for those improvements. Grim also offered me a opportunity to infiltrate a data hub off the European coast. Her description marked it as a pure stealth op; if anyone detected me, they’d wipe the servers.

A chat with Briggs, the ex-CIA operator who serves as Sam’s overwatch sniper, started with casual chit-chat about agency bulk versus agile-team expediency before moving on to loose nukes in Pakistan. I agreed to take a look.

Then a visit to Paladin’s forward deck gave me a cut-scene with annoying, standard issue hacker-in-a-hoodie Charlie, who assured me that he has his “peeps skimming where they can.” Instead of beating him to a pulp, Sam listened to Charlie’s story about a dead-drop in Yeman. “Let’s go get it,” shrugged Sam. Charlie looked just as surprised as me that somebody took him seriously.

All three side missions appeared on the SMI map, ready to play at any time … rather, they will be. None were available during my preview.

But if the SMI functions as seamlessly as Beland describes it, main menus will suddenly look that much more archaic. Of course, he still has to figure out where to put stuff like audio/visual controls — it’s not a working system until I can turn on subtitles and boost gunfire sound effects to 11 — but the SMI could turn out to be the opening salvo in a video-game user-interface revolution.