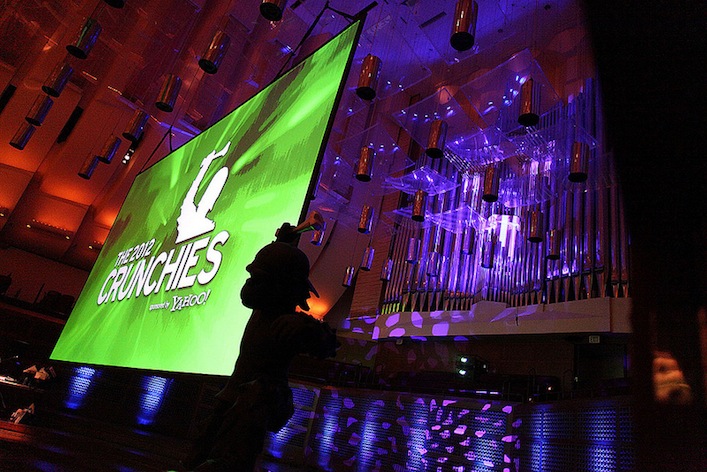 The Crunchies Awards are always a year-end highlight. They highlight the very best in technology innovation each year, and tonight we had the pleasure of bestowing that weird little money trophy out to your tech favorites.

We also got to watch John Oliver of The Daily Show fame make fun of Silicon Valley.

He started out giving the presenters advice on how to best deliver an acceptance speech: “Say thank you and leave.” He proceeded to tell us that his favorite technology innovation is the t-shirt cannon. Unfotunately, however, we had no t-shirt cannon representation at this year’s Crunchies, but we did have some fabulous companies. So, on to the winners!

The little rover that could made it to Mars and captured our hearts on Twitter. We were honored to host Bobak Ferdowsi, otherwise known as NASA’s mohawk man who informed us that Curiosity is actually a lady! JPL, the Jet Propulsion Laboratory at NASA refers to all of its rovers as girls. Work that Crunchie Award, space-dust-collecting-girlfriend!

Airbnb is the Airbnb for, well, itself. The company that connects people with houses to people who who want to skip the hotel experience has grown into a force in the collaborative consumption industry. When it comes to letting people use their own crap to make money, they’re tops.

Fab really is just that. The company is aiming to make people flock to its inventory in the same way they flock to a magazine. And it seems to be working. Keep showing us how awesome our lives could be, Fab, we’re that close to buying a faux bear-skin rug from you.

Thank you, Google Maps. You’ve helped us find our hotels on vacations, coffee shops on first dates, and even helped us get to the nearest bus station when either of those went horribly wrong.

Whoops, did you see that hilarious congratulations picture of me shotgunning a beer while flipping the bird? Not anymore! Snapchat lets us send self-destructing photo and video messages for those all those times we just can’t help but embarrass ourselves.

Pinterest could have just as easily won the biggest time suck award. People spend hours on end looking at wedding paraphernalia, recipes, or fashion, but those little rectangular pins really do help us find beautiful things in the vast, vast Internet.

53’s app Paper gives the digital back that wonderful paper feel. But while their gorgeous design brings out the artist in all of us, they haven’t been able to capture that great paper smell. Maybe they can start sending out paper-scent air fresheners with each app download in 2013.

If you read this site, you probably know Techmeme. It’s the website we all flock to for our daily dose of what’s popping on the tech leaderboards. But though its webpages are filled with news about investors every day, the company remains self-funded. Well done, guys.

“This is an amazing honor, I feel like Snapchat right now,” said Aaron Levie, the chief executive of Box, perfectly summarizing his company’s competitive advantage: a witty co-founder with a Twitter account. Of course, we kid. Box is much more than that. It competes directly with big cloud storage names like Dropbox and Google Drive, but maintains its scrappy integrity and, as you can see, sense of humor.

You want to share some music with your buddies, Soundcloud gives you a legit way to go about. It’s like a YouTube for sound and while it may be great for sending awesome music out into the world, you might want to check out John Oliver’s weekly The Bugle. We’ll let you discover that for yourself.

Codecademy wants to bring the sometimes elusive world of coding to everyone. Like any language, code is difficult to learn, but the company walks you through the process with the hopes that anyone can learn in their spare time. To drive this point home, Codecademy sent up a customer to accept the award. She announced that she’d quit her job after starting Codecademy classes in 2011 and was looking for a new one being, guess what? A programmer. Congrats on your success, Codecademy!

Next year we’re just going to print out awards for everyone. Why? Because 3-D printing makes it possible! It’s an awesome world when you can just press File-Print on a dishwasher repair piece or a missing chess piece and suddenly have it in your hands. Makerbot is bringing manufacturing home in this way, and we are glad to watch the printing revolution happen before our eyes!

Believe it or not, Reddit is filled with more than just weird fan fiction, Imgur links, and great communities — it’s also filled with incredibly generous folks who are willing to gather together to give for a cause.

And Reddit says it has only two people to thank: the users and President Obama for coming to the site.

Chris Dixon is an investor with Andreessen-Horowitz who invests in some awesome early-stage startups. He’s passed checks along to Skupe, Hipmunk, Kickstarter, and a number of other successful startups. Keep pointing us in the right direction, Chris, we like what you’re doing!

VC of the Year: Peter Thiel

Founder’s Fund managing director Peter Thiel has helped spawn a generation of entrepreneurs, and he continues to shape Silicon Valley’s future with smart, analytical investments that prove his ability time and again. He was an early investor in Facebook, and this year he helped grow Palantir into billion dollar data analysis giant.

Founder of the Year: Kevin Systrom

The surprise deal of the year was Facebook’s nearly billion-dollar acquisition of Instagram (subsequently revised to about $700 billion, given changes in Facebook’s valuation). That undoubtedly made Systrom one of the happiest founders. He’s also one of the cleverest, building Instagram from a simple photo-sharing app into one of the hottest new social networks.

CEO of the Year: Mark Zuckerberg

There really wasn’t any serious competition: With a successful (if controversial) IPO and a billion active users, Facebook owned 2012. Its CEO, Mark Zuckerberg, has shown a rare ability to transition from entrepreneurial founder to the leader of a large public company, translation vision into action and creating a uniquely developer-centric culture that has taken Facebook to the heights of social networking. Just 28 years old, Zuckerberg has already shown leadership far beyond his age. Just imagine what he’ll do with the next 10 years.

More than 2.5 million people have taken university courses — from some of the world’s top educational institutions — through Coursera’s online education platform. That’s pretty impressive for a company that has been around less than a year.

A massive code repository and tool for helping coders share their work and collaborate on projects, Github has grown to become an indispensable part of the tech ecosystem. Its Crunchie reflects just how much of a difference it has made, from open-source projects to enterprise development and beyond.

And the nominees were…

Who were the winners above going up against? Here are the nominees in each category.

Angel of the Year

VC of the Year

Founder of the Year

CEO of the Year