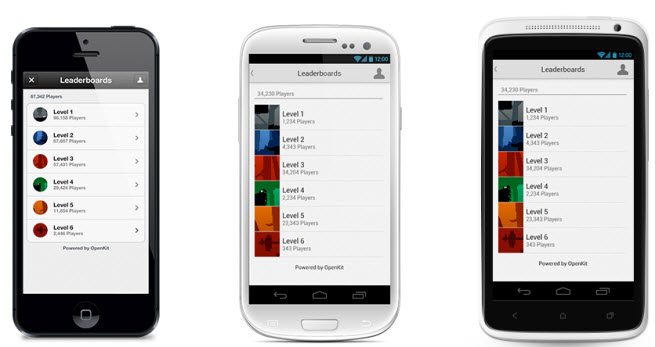 OpenFeint cofounder Peter Relan announced today that his team has launched the closed beta test for OpenKit, a platform for adding features such as cloud data storage, leaderboards, and social networks to mobile games and apps.

The announcement should mean a lot to independent mobile game developers, who want to offload the work of creating social integration via a common back-end infrastructure. With OpenKit, which is both a company and a platform, the developers can be assured that they will always be able to access their own game data for the open-source platform.

Relan said that the response to the open-source effort has been so big that his team of three developers has moved quickly in the past six weeks. Relan announced the open-source platform effort after Gree (which acquired OpenFeint in April 2011 for $104 million) shut down OpenFeint in December. He emphasized that game developers could safely adopt OpenKit because, if it ever shut down, they could take their game data and the OpenKit source code and move it to another platform. That was not the case with Gree. The flaw with OpenFeint, first released in 2009, was that it was not an open-source effort.

Relan asked developers if they wanted the platform and what features they wanted. Within the first day of announcing OpenKit, Relan and his company based in Burlingame, Calif., received 160 queries from developers. By the end of the first weekend, more than 500 had expressed interest. And the No. 1 feature they requested was a common platform for creating cloud-based storage for saving games. That task has become one the many headaches associated with running a server-based mobile game for developers.

“When you ask a mobile game developer to do coding for backend infrastructure, their head explodes,” Relan said. “We are moving at lightning speed. I think this will be bigger than OpenFeint, which had thousands of developers. I think developers have had it.”

Over time, Relan said the team will add more features such as leaderboards, social network integration, achievements, multiplayer features, push notifications, and in-app purchases. He thinks the team can launch the open beta in February and see games going live with the platform in March.

“This team has been amazing, and developers trust them,” Relan said.

So far, OpenKit has signed up 30 developers for its private closed-beta test. It will add 20 more and then slowly open the service up to more developers.

The source code will be made available under Apache (for client code) and AGPL (for server code) licenses. Developers planning to participate in the private beta or contribute to the open source project can register with OpenKit.

Rob Segal, a developer at Get Set Games, said, “Being able to abstract out key components of any project and leverage them for multiple platforms eases many development effort pains. The team at OpenKit understands that and we’re looking forward to collaborating with them to realize that focus.”

“On Dec 13, we announced the OpenKit project to solve the recurring problem in 2012 of developer furor over applications programming interfaces,” Relan said. “Hundreds of developers signed up immediately to tell us what they wanted. Today we are unveiling the momentum of support behind OpenKit, with the goal of providing all important mobile back-end services for mobile game developers. Even iOS developer who have access to GameCenter services today, recognize the importance of cross-platform development for Android, and have come to us in large numbers asking for OpenKit. There is a reason: OpenKit is a single API and service across iOS and Android.”