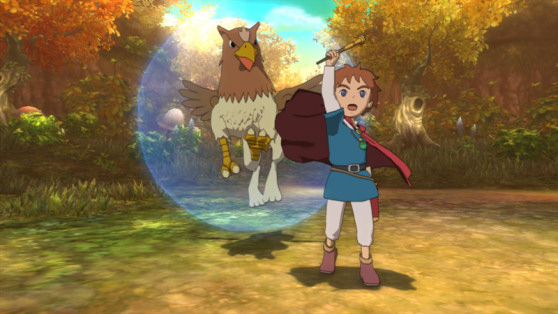 Game music isn’t all chirpy chip tunes or sweeping symphonic movements. Just like film scores, soundtracks inspire us, scare us, and can even bring us to tears with a well-placed melody or a jarring action cue.

Because of this, I decided it was time we start paying attention to music as well as the people lovingly creating it. Try playing through Final Fantasy VII, Borderlands, or The Elder Scrolls V: Skyrim with the sound turned off. None of these are even half as good without their scores subtly shifting tone and setting scenes around us.

Each month, I’ll take you on a guided tour through some of the notable albums released in the last few weeks and interview a composer on an upcoming project.

This month, we’ll take a look at Ni No Kuni: Wrath of the White Witch, DmC: Devil May Cry, and Anarchy Reigns. We’ve also got an in-depth interview with Aliens: Colonial Marines composer Kevin Riepl.

It’s a bit disheartening that many Japanese role-playing games these days are moving away from jaunty adventuring tunes. Long-time Studio Ghibli composer Joe Hisaishi’s score for Ni No Kuni: Wrath of the White Witch delightfully combines the orchestral bombast found in older Final Fantasys and Dragon Quests with his own playful melodies.

Hisaishi’s music enhances the overall Ghibli quality to Ni No Kuni. You could use the studio’s art style and even the same story with any other composer’s work but it wouldn’t retain that feeling that you’re diving into a Miyazaki film. With Hisaishi’s help, Ni No Kuni gets a little extra sprinkle of magic in an already fantastic adventure.

This is probably the least comfortable soundtrack I’ve listened to in many years. DmC: Devil May Cry leans heavily on pulsating and grating dissonance with an occasional burst of tinny orchestral melody.

Dutch electronic group Noisia took a step away from their signature drum ‘n’ bass for most of Devil May Cry and focused instead on a grungy and oppressively synthetic wall of noise.

Fans of dubstep insisting on “dirty” bass drops will likely enjoy the soul-vibrating nastiness to the bass lines in “Mundus Theme” and “Lilith’s Club.” Dubstep is already an overplayed addition to most games, but Noisia’s attempts fit it into Devil May Cry’s overall tone and maintains a feeling that the world is constantly shifting between reality and Limbo.

I dare you to not want to kick some ass after listening to Anarchy Reigns. Every song drips with that “hardcore” sound Sega established in Jet Set Radio and Crazy Taxi in the late ’90s, but here it updates it for a more hip-hop-aware world. Fat beats and heavily repetitive lyrics deliver a perfect one-two punch for tireless combos and horrible acts of digital violence.

Nothing about Anarchy Reigns is particularly classy or subtle, so it stands to reason that the music glorifies vengeance and thuggish braggadocio. Spending a few minutes with “Kill ‘Em All” and “Laughing at U” will almost certainly make you put on some gloves and destroy a punching bag.

Unlike Ni No Kuni and Devil May Cry, Anarchy Reigns’ music is always in your face like an overzealous hype man urging you to feel the beat.

Well, it worked. Excuse me while I go to the gym.