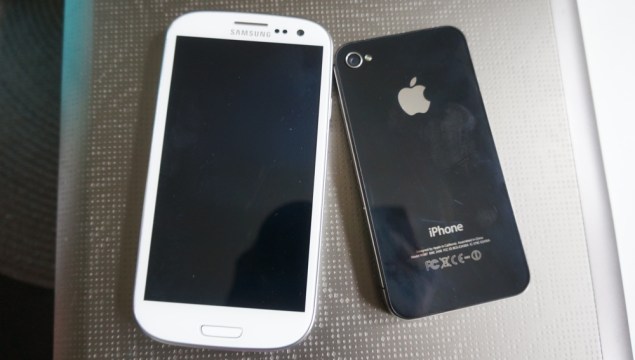 The firm estimates Apple shipped 17.7 million iPhones during the fourth quarter (Apple’s own figures cover its fiscal quarters, not calendar quarters), barely edging out Samsung’s 16.8 million phones. That left Apple with 34 percent of the U.S. phone market (a big jump from its 25.4 percent share last year),  compared to Samsung’s 32.3 percent.

The victory was likely due to Apple having the iPhone 5 during the fourth quarter, while Samsung released its flagship Galaxy S 3 in the middle of 2012. Apple’s win may also be short-lived — Samsung remained the top U.S. phone vendor for all of 2012, with 53 million phones shipped versus Apple’s 43.7 million.

Strategy Analytics points out that Samsung has been the top U.S. phone vendor since 2008, and it will likely reclaim the top spot once it releases its next major phone, the Galaxy S 4. Samsung also has several other phone lines, like the Galaxy Note and lower-end Android phones, while Apple only has its iPhone line.

Overall, Strategy Analytics found mobile phone shipments in Q4 jumped 4 percent to 52 million units. But due to economic issues and carrier upgrade restrictions, the firm found, phone shipments fell 11 percent for all of  2012, from 186.8 million units in 2011 to 166.9 million last year.