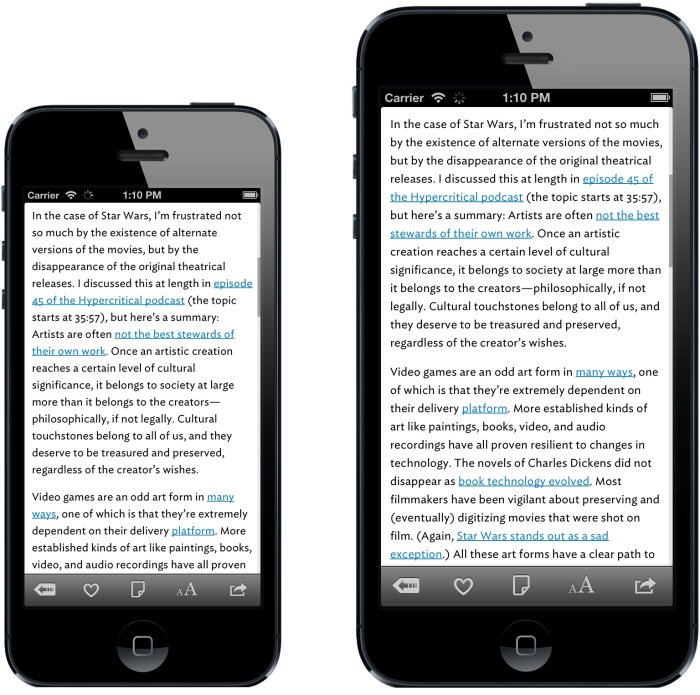 It’s inevitable that Apple will move beyond the iPhone 5’s 4-inch screen — the real questions are how and when.

Recent rumors from China pointed to a 4.8-inch “iPhone Math” coming around June, but the odd name and questionable sources made that tough to swallow. Still, aside from the timing, there may be some truth to those reports.

Instapaper creator Marco Arment has mocked up what a 4.94-inch screen “iPhone Plus” (perhaps a better translation of iPhone Math) could look like, and the results honestly don’t look that far-fetched. Arment assumes Apple would use a wide 16:9 screen with the same 264ppi pixel density as the Retina iPad and an iPhone 5 resolution (640 by 1,136) — similar to how the iPad mini uses the original iPad’s resolution with the screen density of the iPhone 3GS.

Why that logical leap? The key to a big-screen iPhone, just like creating a smaller-screen iPad, is making sure that apps can run full-screen without any additional modification. Many developers still haven’t updated their iPhone apps to support the iPhone 5’s taller display, and Apple wouldn’t want to create yet another design schism so soon.

Even though we’ve only had the iPhone 5 for a few months, it wouldn’t be that crazy to think Apple is pondering a bigger phone. Large screen sizes are pretty much the standard now among Android phones, so eventually the iPhone 5’s 4-inch display could be a huge turnoff to potential buyers. Apple could also offer the iPhone Plus alongside its smaller iPhone (something that the iPhone Math rumors pointed to).

As for timing, I don’t think it would make much sense for Apple to have a mid-year iPhone debut, though you could argue that Apple has to move even faster to keep up with the competition. My bet is still on another fall debut for the next iPhone, which other recent rumors are also pointing to.

Personally, I’m all for sensible smartphone screen sizes. I thought Huawei’s 6.1-inch Ascend smartphone was one of the worst devices at CES this year, mostly because it was ludicrously large and difficult to use as phone. After a point, the race to create bigger phone screen sizes will have to stop. But I wouldn’t blame Apple for getting into the big-screen phone arena — it has to compete, after all.

A bigger iPhone would also mirror the iPad line, where Apple now has the large 9.7-inch iPad model alongside the iPad mini. There are also rumors that Apple is considering a cheaper iPhone model, which would make it more attractive to customers in emerging markets.