So, Apple has top market share in the U.S., and Samsung is close on its heels. That much we know. But the sheer scale of the dominance is simply shocking.

In the fourth quarter of 2012, manufacturers shipped 52 million phones in the United States, according to Strategy Analytics. Apple shipped 17.7 million of them, and Samsung shipped 16.8 million. The next largest competitor, LG, shipped only 4.7 million.

Everything else is buried in the dreaded “Other” category: 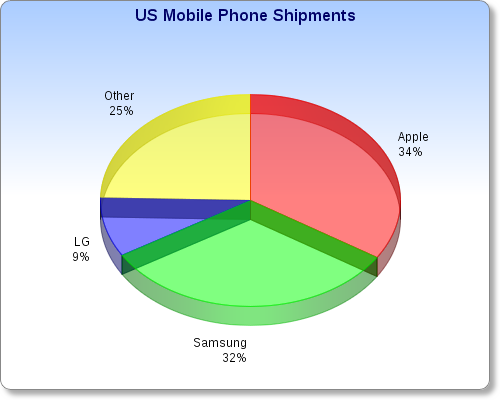 What those numbers mean is that Apple and Samsung have cornered 65 percent of the market (or 69 percent, according to the NPD Group’s numbers). But it’s even more shocking when you look at phone models. The top five models all come from the only two smartphone vendors that have won significant market share in the U.S.

“Apple and Samsung continued to run away from all the other smartphone makers accounting for nearly 70 percent of all sales during Q4 2012,” analyst firm NPD Group said in a statement.

The iPhone 5 was the top-selling smartphone in the last quarter of 2012, according to that NPD Group report, and Apple has three more spots in the top five, with its old model iPhone 4S and even older model iPhone 4 still selling well.

Above: Top 5 selling smartphones in the U.S.

Samsung is doing very well also, of course, with two phones in the top five: its flagship Galaxy S III and the slightly less-well-endowed Galaxy S II. And of course, Samsung has a raft of other products in its Galaxy and other model lines targeted various consumer niches.

Besides the fact that the smartphone race in the U.S. is a two-horse race, another thing is completely clear: Smartphones have clearly beaten feature phones. And that’s going to force another set of changes in the market.

“While smartphone sales continued on their torrid pace in the fourth quarter, the seeds of change are evident in the sales numbers,” the NPD Group’s VP of industry analysis Stephen Baker said in a statement. “With of the vast majority of all phone sales now smartphones, and with the largest unit-sales growth within smartphones occurring in the prepaid segment, today’s product pricing and channel models will need to adapt to accommodate this new reality.”