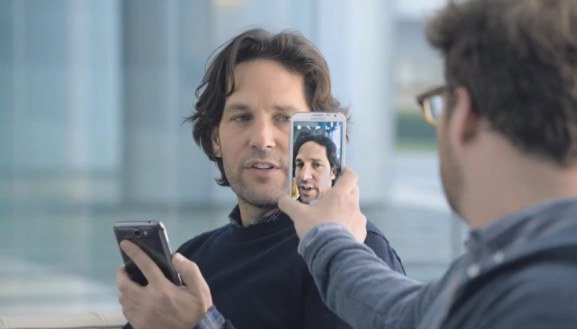 What kind of commercial do you run if you’re constantly locked up in legal battles with your major competitor? If you’re Samsung, you fork over a dumpster full of cash and avoid alluding to Apple devices like you’ve done in the past.

The 120-second commercial was intended to have its global premiere during the fourth quarter of this year’s Super Bowl. However, Samsung decided to post the entire video on YouTube earlier today.

Just like we saw in earlier teaser videos, the commercial features celebrity funny men Paul Rudd and Seth Rogen being interviewed by Bob Odenkirk about doing a “Next Big Thing” endorsement ad for Samsung. NBA star athlete Lebron James makes a cameo on a tablet at the end, but not before lots of banter and ridiculous ideas for what to do in the commercial.

In addition to the estimated $15 million cost of airing the ad during the big game, Samsung also had to pay four celebrities and the commercial’s director, Jon Favreau (of Iron Man 1 & 2 fame). That’s a ton of cash for a commercial that, while funny, isn’t nearly as piercing as its ads teasing Apple about its customers being clueless old people.

We’ve embedded the video above. Let us know your thoughts on it in the comment section below.