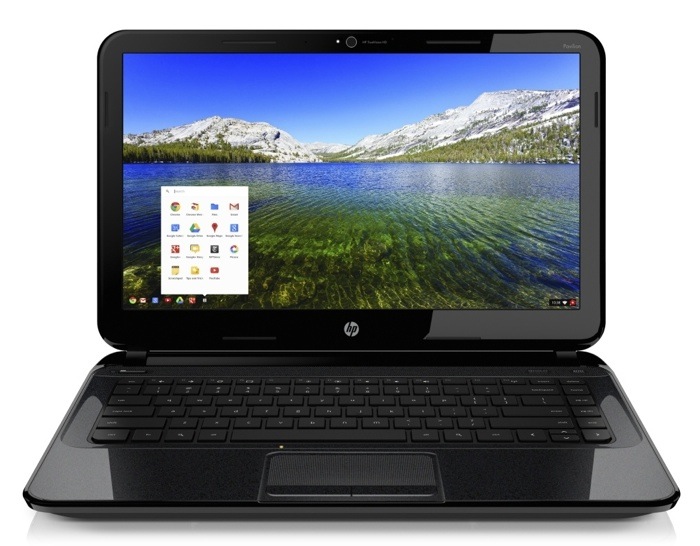 HP is officially getting into the Chromebook fray with the HP Pavilion 14 Chromebook  — but unfortunately it doesn’t do much to justify the existence of Google’s browser-focused OS.

HP’s Chromebook is bigger than the competition with its 14-inch screen, and it’s more expensive at $330 (Samsung’s Chromebook sells for $249, while Acer’s is just $199). The Pavilion 14 Chromebook continues the trend of inexpensive but clunky machines featuring Chrome OS, but like its predecessors it doesn’t really have much of an advantage over a cheap Windows computer or a tablet.

Without the benefit of a bargain price, HP’s Chromebook is a tough sell — especially for a value-focused platform like Chrome OS. It’s available today at HP’s website and will soon be available at U.S. retailers.

The larger screen size means it can fit a larger keyboard as well as more ports, including three USB 2.0 ports and an SD card slot (allowing you to upgrade the computer’s measly 16 gigabytes of storage). Under the hood, the Pavilion 14 Chromebook features a 1.1 gigahertz Celeron processor (seriously, why aren’t these processors extinct already?), 2 gigabytes of RAM, and integrated graphics. The computer only offers around 4 hours and 15 minutes of battery life, and it’s far from Ultrabook territory at around four pounds.

There’s certainly some potential with Chrome OS: It allows for cheaper computers, since manufacturers don’t have to pay a licensing fee, and its web-focused interface makes sense as we rely more on cloud services. But to be truly valuable to consumers, Chromebooks also need to offer something significantly more than existing cheap laptops and tablets. It’s a shame that we’ve fallen behind the netbook age, when tiny cheap computers gave us over six hours of battery life (and in many cases far more).