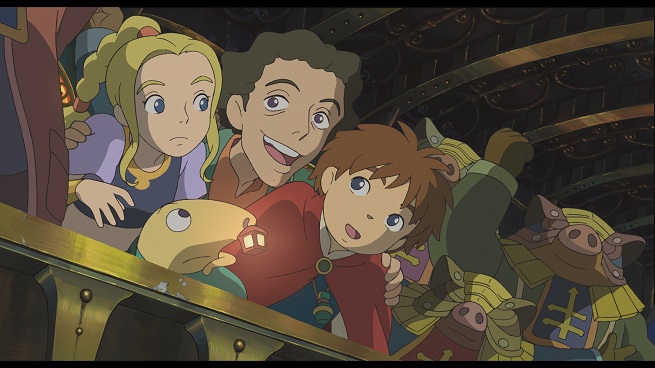 Ni No Kuni moves me unlike any other Japanese role-playing game I’ve played in years. Its poignant story and visual artistry transport you to its worlds and make you care about its residents and about what’s happening to Oliver and his friends.

But after about 10 hours, the combat may drive you mad — or bore you.

Ni No Kuni is all about a heartbroken young boy, Oliver, who ends up leaving his world to help another. On the way, as in many other RPGs (Japanese or Western), he meets an oddball band of characters who helps him take on a menace. One that is, in this case, threatening two worlds. 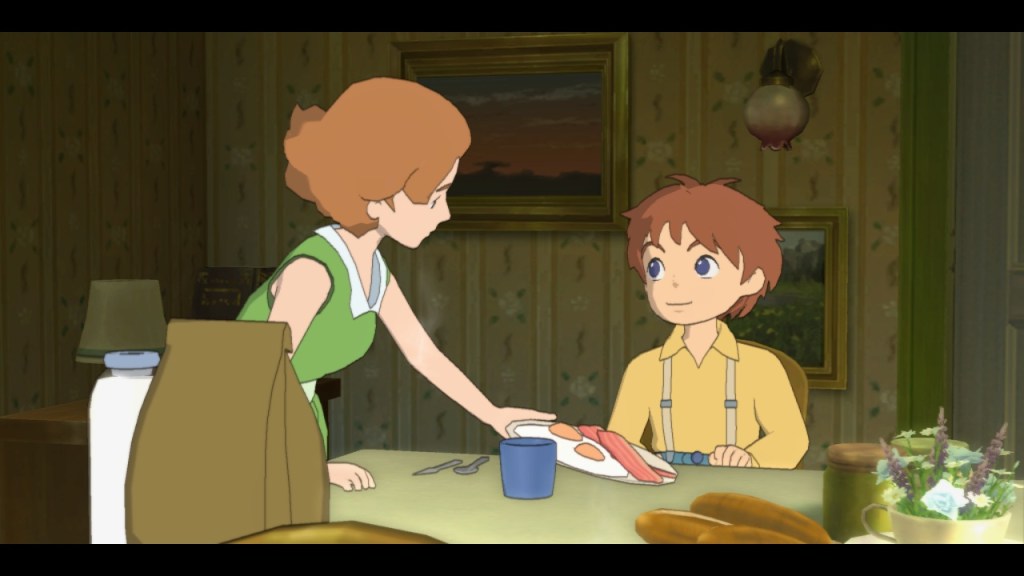 The affecting storytelling is at its best in the first 10 hours. Oliver deals with the loss of a loved one, and one of the reasons he’s traveled to this land of fantasy is to bring that person back to life. This is tricky territory for any artist, be it a video game studio, a film writer, or a poet. Yet I found that Studio Ghibli and Level-5 nailed this, and I speak from my own experience.

Children do not know how to deal with loss, and a flight into fantasy is one way in which they cope. I can’t remember how many times I could’ve used magic or some other fantastical method to have brought my mom back when she died when I was 7. After my father died recently, my niece wanted to bring him back with a magic potion. So it’s no surprise that Oliver, when confronted with an epic quest that could just happen to bring back someone he loves, grabs hold of the opportunity.

But Studio Ghibli’s and Level-5’s take on poignancy isn’t limited to Oliver’s coping with his loss. In Ni No Kuni’s world, a number of citizens are dealing with the loss of vital emotions and drives, such as enthusiasm. It’s up to you to heal these folks, but how? It’s simple, and to me, it’s also quite moving. You find people who are bubbling over with such emotions, and you sprinkle in some magic by taking some of this extra emotion and transferring it to another person. Typically, these little quests net your stamps — fill a card with enough of them, and you can trade it in for an ability boost (or save it and trade in two or more for bigger boosts).

What amazes me about these two elements is just how much they work together. As a child who suffered a great loss early in life, I wanted to do whatever I could to help others feel better about things in their life. I have no scientific or psychological evidence to back this up, but from talking to others who as children also suffered similar losses, I found that the need to “fix people” is something many of us share. And Ni No Kuni nails this. You are fixing people here. It makes me wonder if any of the writers also suffered similar losses when they were young. 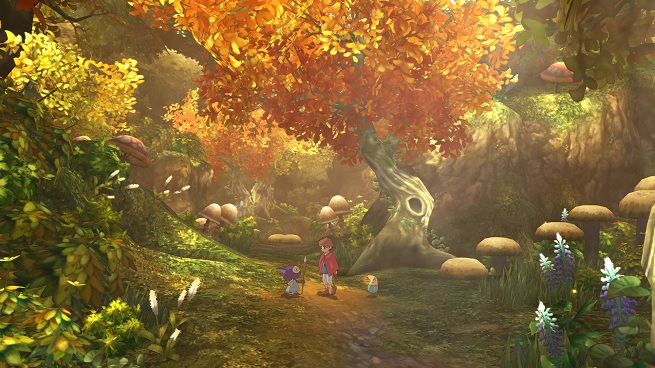 Years ago, Level-5 established its reputation with some of the best visuals in Japanese role-playing games. Its lush animations in Dragon Quest VIII remain one of the best we’ve seen on the PlayStation 2, and the same goes for the Professor Laytons for the Nintendo DS and 3DS. Marry this with the beautiful animation work from Studio Ghibli, and you’ve got one of the best-looking creations not just for the PlayStation 3 but any platform.

The animation is at its best during the cutscenes; the work here is just as top-notch as what you’d find in Ghibli movies. Normally, I’d get upset when a game takes its time to “clear its throat,” so to speak, and get on with its opening (it takes about 45 minutes before Ni No Kuni does so), but since I spent most of that time admiring the masterful visuals, I really didn’t mind.

But when the action moves away from the cinematics — be it as you explore a city or venture out in the wilderness — the world you find is still better looking than that of most role-playing games. What’s particularly keen about the artwork is how it complements the world. In one fight, a genie pulls out Victorian dresses and parasols from a big pot, and these have all of the embellishments one would expect from clothing that just might fit the set of Downton Abbey. Oliver’s “real world” looks like snapshots of 1950s America. The greenery is appropriately lush in forests; the grass seems to almost flow on the Savannah. When it comes to the visuals, Level-5 and Studio Ghibli have put together a game that almost asks, “Do we really need new consoles when we can do this?”

Drippy and the familiars

Drippy is one of the best companions ever written for a Japanese RPG. A doll your mother made that your tears bring to life, he’s also the Lord High Lord of the Fairies — and your best friend, your guide, your mentor, and your smart-alecky older brother. He adds to the richness of the fantasy world.

With a snhozz that would inspire envy in Jimmy Durante, Drippy propels you through the story, especially when you’re just learning about combat, magic, taking or giving heart, and traversing between the fantasy world and the mundane. It’s during this time that most players, I imagine, would bond with Drippy. His insights and humor almost always add to the story. At first, with his outrageous accent, I thought of him as a variation of Angus of Dragon Quest VIII. But Drippy grows on you much quicker, proving to be an invaluable resource — and more importantly, a friend — on your journey.

Another of Ni No Kuni’s charms is its familiars. These are mostly cute little critters that you raise like Pokémon and send into combat. While Ni No Kuni’s lore establishes that they’re born from a wizard’s heart, in truth, your best tactic for finding and training these creatures is to capture them in combat (which, sadly, you can’t do until you’re double-digit hours into it).

What’s great about the familiars is their variety and their names. I would hope the writing staff had a thorough “pun cleansing” after finishing their work as the wordplay for many of them goes beyond anything you’d find in Dragon Quest. Things like “Sore Boar” and “Green Buncher” (this looks like a walking bunch of bananas) — and my favorite, the “Purrloiner” (a pirate cat!) — enhance the charm and show that while the writers are dealing with some heavy issues, they also have a light heart (if a heavy hand when applying it).

You train your familiars by throwing them into combat, feeding them food that boosts their abilities, and using “drops” to help them transform into more powerful forms. This can be a timesink, and while some will find it fun, I did grow a little bored of spending time leveling these critters up. 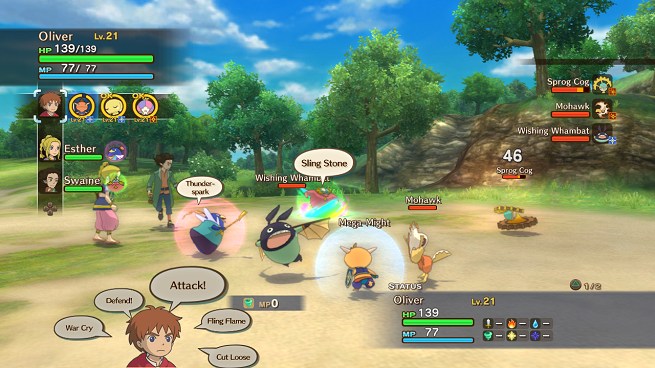 One of the greatest challenges that designers of role-playing games face is the balance between combat, exploration, and story. Focus too much on one, and many players cry out for the others — and your game turns into either a slog of going from one place to another, fighting too many enemies to get where you’re going, or not offering enough “gameplay” to balance out your cutscenes.

Because you must level up your characters and familiars in order to withstand some of the bosses, I kept spending more and more time wandering the wilds, encountering monsters and engaging in combat, which extends the time between one story bit to another. Now, maybe I was too obsessive about leveling up my party and familiar (I do tend to be a bit compulsive when I play Japanese role-playing games or any other genre that grants some level of freedom of choice and exploration), but I felt like I had no other alternative, especially when I arrived at a couple of points where my party just wasn’t strong enough to deal with a boss fight or another specific encounter. It would’ve been great to have experienced Studio Ghibli’s cutscenes more often. They’re that beautiful and engaging. Sadly, you’ll find yourself spending more time chasing experience than you will pursuing the story.

You spend a great deal of your time fighting, and the more you fight, the more obvious it is that the combat system needs help.

When you fight, you may choose to control Oliver (or another party member) or one of your familiars. You can switch among these choices during combat should the need arise to use powers available to a specific character or familiar. This is the best part of the combat system, giving you the flexibility to throw the right weapon at the problem instead of fighting with a disadvantage. If you’re battling a monster that’s weak against fire, it’s easy to scroll through your party members and familiars and find the one that’s best equipped to handle that encounter. This works just fine.

Other things make combat a chore. The fights take place in real time, but each action — be it from a party member or a familiar — is on a timer, and sometimes, you find yourself wishing that this limit didn’t exist. You’re defending against an attack, and more often than not, the defense routine would end just as my foe was taking a strike at me. So of course, I suffered a blow. Your familiars are also restricted in this way; you can use them for only so long before you need to switch to another.

Your allies are also stupid. Just plain ol’ stupid. They don’t always choose the best positioning or attacks, and they love to snare glims (small balls of energy that fall from your foes as they suffer damage) that heal you or restore your mana. Your allies are especially fond of nabbing the special gold glims that unleash the most powerful attacks of your familiars. During fights against bosses, I swore more than I have while editing copy from a busy day at E3 — and in a much smaller window of time — because of my allies’ insistence on being “ballhogs.”

You may think this is a nitpicky compliant, but when you spend as much time in combat as you do in Ni No Kuni, it escalates from annoying to ball-busting. 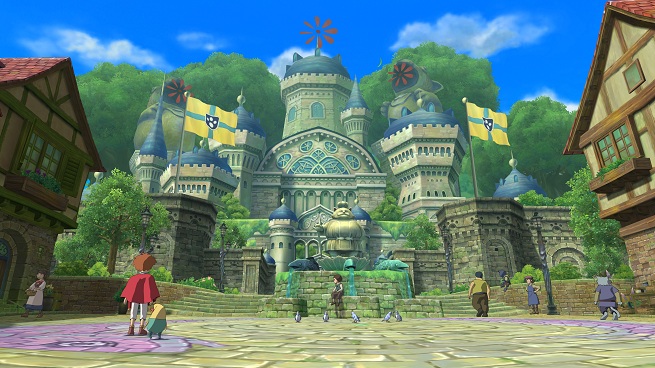 Ni No Kuni is a noteworthy achievement for Studio Ghibli and Level-5. Take a master of film animation and add one of the well-regarded studios for role-playing development, and in this case, we get a video game that’s stunning to behold — one that can take players to unexpected emotional places and make them eager to push through the story to see the next brilliant cinematic.

And we also get an experience that’s a bit too rooted in old Japanese role-playing traditions.

I hope Ni No Kuni’s reception — and sales — convince Studio Ghibli that its dive into video games was worthwhile. I’d love to play another from them — as long someone there remembers that video games, like movies, need good pacing.

Ni No Kuni: The Wrath of the White Witch is available now for the PlayStation 3. Publisher Namco Bandai provided GamesBeat with a copy of the game for this review.