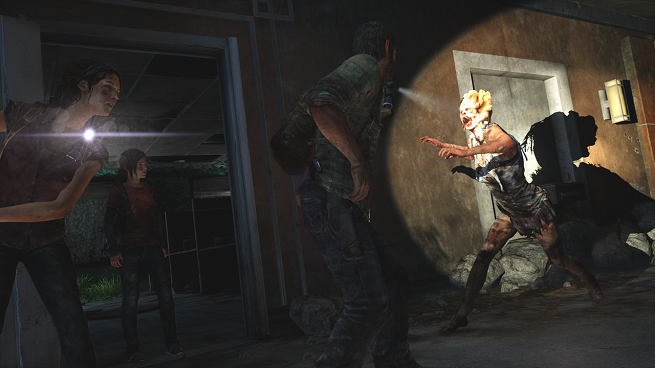 Despite The Last of Us depicting a post-pandemic U.S. with most of the country’s population dead, it still manages to pass the Bechdel test. That would be the simple, three-part checklist to determine if a work of fiction has a basic presence of female characters who engage in something besides men. With all of the discourse about misogyny in video games over the past year, The Last of Us taking this route is quite refreshing. Especially since not a whole lot of games (or movies) meet these basic criteria.

I played developer Naughty Dog’s survival adventure (releasing May 7 for the PlayStation 3) at a recent event in Los Angeles and was quite pleased with the strong character development. Even though I’m kind of a wimp when it comes to scary stuff, its beautiful and tragic world drew me in.

Playing as the smuggler Joel, I wandered through the ruined, nature-reclaimed skyscrapers of downtown Boston. I hid from, shanked, shot, and pummeled ex-humans infected to varying degrees by a contagious, consuming fungus. And throughout the introductory demo, I saw how The Last of Us easily passes the three requirements of the Bechdel test. 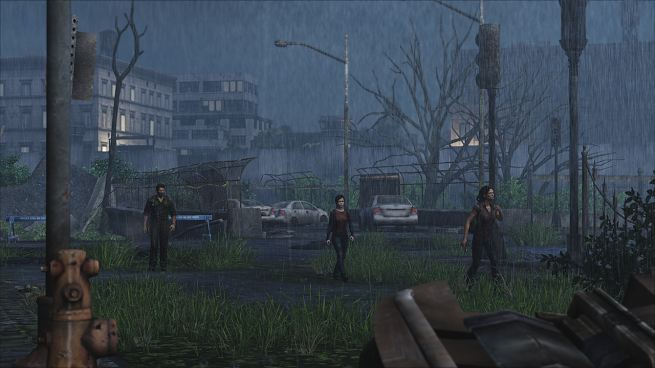 1. Does the work have more than one female character with names?

Yes. One is a 14-year-old girl named Ellie. She was born and raised in the militarized quarantine zone and has a strong curiosity to learn about what the U.S. was like before the pandemic.

“She scavenged books in the environment and has read up on things,” explained game director Bruce Straley. “She’s fascinated with the old world or what we know and take for granted. Like TV sets, watching football, playing video games — these are luxuries that we have that to her are just like a foreign concept.”

Ellie also has a good amount of teenage angst. At one point she barks at you (as Joel), “Fuck you, man! I didn’t ask for this.”

Tess is the other woman I encountered. She teams up with you to smuggle Ellie through the quarantine zone to the Fireflies militia group outside the walls. Tess is quite the tough and adept survivor. One minute she knocks an infected human “runner” off of you and the next she shoots it in the face at point-blank range.

Then Tess teaches you how to fashion a medical kit using some scavenged wrap and alcohol. At a later point she demonstrates how to throw bottles and bricks to distract blind, fungus-covered “clickers,” who get their nickname from using echo location to find their next meal. Tess is quite the lifesaver. 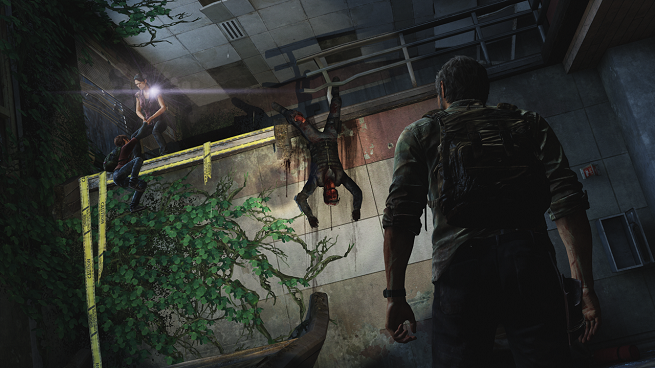 2. Do they talk to each other?

Yes. In fact, I heard at least two conversations between Ellie and Tess during the 30-minute section I played.

3. Is their conversation about something other than a man?

Yes. After we snuck past the first clicker in a particularly tense moment, Tess asks Ellie if she’s OK. “Other than shitting my pants, I’m fine,” Ellie responds. In a more tranquil exchange, the two women stand on the edge of an elevated street and look down on all of the dilapidated buildings that are tumbling over and covered in plants. Ellie somberly asks if that was the downtown area, and Tess explains that they’re looking at what’s left of the urban center.

And just like that, The Last of Us passes the Bechdel test and does it with brave women who have some depth. But how deliberate is all that?

“I don’t think we’re trying to do anything special, as much as just create strong characters in general,” said Straley. “This world necessitates strong characters. Female or male, if you’re going to survive in this world we’ve created here, you have to do whatever it takes. And you get to see Tess do whatever it takes. And she’s completely capable with or without you.”

I agree with that. Tess would periodically run ahead to search rooms for supplies or test out some shaky scaffolding we needed to traverse. But Joel contributes to the group’s survival just as much and at times in an almost gentlemanly way. He waits for Tess and Ellie to first climb to safety before he does (I cowardly tried to go before they were on top but couldn’t!), moves a heavy file cabinet blocking a staircase for them, and offers to fight off a band of Infected on his own. 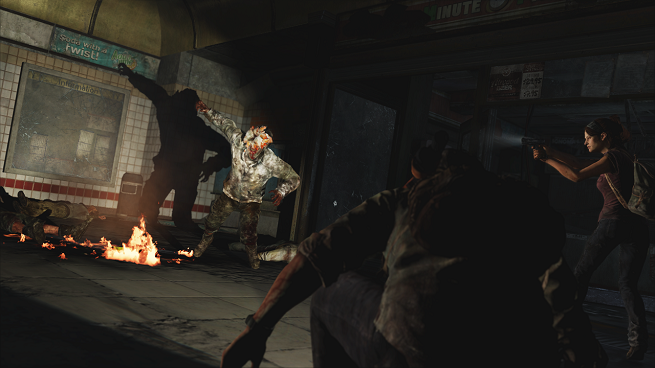 In between scrimmages, you can explore the dystopic world Naughty Dog created. This presents opportunities for Joel, Ellie, and Tess to share passing moments and open up about themselves and their past. The stressful survival moments — where, for example, you might have to face five enemies with nothing but two bullets and a 2-by-4 with scissors strapped to it — alternating with these calm ones is how Naughty Dog develops its heroes and the action.

“If we make the gameplay feel that way, then we can then draw attention to the emotional side,” said Straley. “These characters that you’re with could die. It’s like nobody is safe in this world. So drawing a line in terms of the plausibility of survival, moment-to-moment, day-to-day, and then the fact that we’re building an emotional connection with these characters and our lives, really changes how we approach combat, how we’re going to approach getting through a scenario with these allies.”

We’ll have to wait until May to see how everyone’s relationships pan out, and who makes it out alive. Until then, kudos, Naughty Dog, for making not just an immersive, story-driven survival experience, but one that nonchalantly passes the Bechdel test.