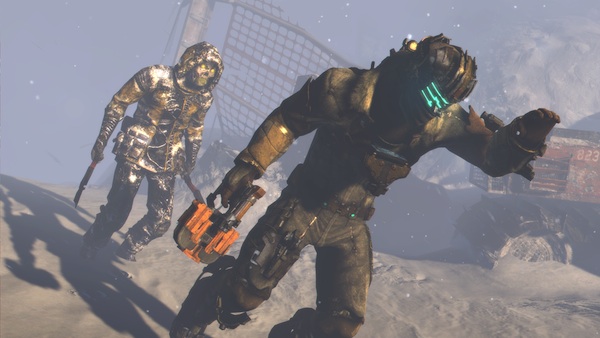 It feels a bit bloated

Dead Space 3 is a meaty experience. You travel to colonies, fly around abandoned spaceships, and search through 200-year-old facilities in the frozen tundra of Tau Volantis before the end. The size and scope of your adventure is bigger than any other Dead Space, but this not necessarily a good thing.

Backtracking through levels has long been a part of the series, but in Dead Space 3 it’s starting to feel a little tiring. It wouldn’t be so bad if Visceral Games could add a better way to move from one place to another without relying on the same crutches — I lost count of the number of elevators, lifts, and other entrances I had to pass through just to arrive to a new area. Though it makes sense in the fiction — you are inside of massive, multifloor structures, after all — the rusty interiors become an eyesore after seeing them over and over.

The new optional quests, which usually end in finding a huge stash of loot, also suffers from repetitive design. These missions come in pairs: One you can do on your own, and another that’s specifically for co-op (locking out solo players). If you go through both sets back-to-back in co-op, you’ll immediately realize the similarities. Each pair share the same layout and have minor implications overall on the story. Except for those that focus on Carver (see below), all of them lead to a type of arena battle where you’re stuck in a room and have to kill all the Necromorphs before you can leave.

As beautiful as Dead Space 3 looks with its snow-covered cliffs and grotesque cast of monsters, the dreary indoor settings feel like you’re running through generic hallway A to get to generic hallway B. The narrative always has a sense of urgency, but its momentum languishes when you have to trek through these sprawling levels. I’d rather have a shorter, leaner experience over the massive and slightly unfocused one in Dead Space 3. 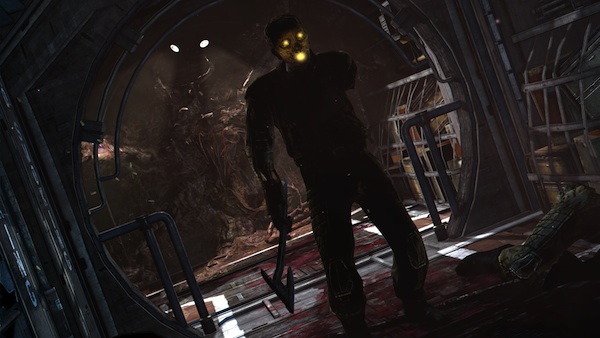 Locking content to a specific character
John Carver is the lucky winner in this latest round of psychological madness. Optional co-op-only missions delve into Carver’s reaction to the alien Markers, which includes some fun visual tricks that the other player (controlling Isaac) cannot see. Phantom voices, family portraits, and assorted objects from Carver’s past show up during these segments as his perception of reality slowly unravels.

At times, the contrast between what I saw — Carver lost in an imaginary world influenced by the Markers — and what my co-op partner saw was drastic. To him, Carver was shaking uncontrollably and speaking to himself in weird fits. This descent into dementia works well in a co-op environment, especially when trying to describe to your partner what you’re seeing over your headset.

Unless you find someone to play with, however, you will not have access to Carver’s side of the story. Isaac still interacts with the Markers, but he no longer experiences the hallucinatory visions responsible for part of the tension and scares of the first two games. It’s unfortunate to see one of the more promising (though brief) parts of Dead Space 3 locked to a co-op only character.

With a throng of religious extremists hunting Isaac and Carver down, you’ll eventually have to face them head-on, complete with carefully positioned pieces of cover. These segments just feel bland, clunky, and uninteresting. This would make more sense if it was just Isaac, who’s an engineer by trade, but it’s not an excuse for EarthGov soldier John Carver. The battles only happen a handful of times, but I dreaded every moment leading up to the next one.

Dead Space 3 is wrapping up a trilogy that started with a silent Isaac Clarke stranded on a spooky spaceship, took us through the torturous mental aftermath as he dealt with the Markers and his dead girlfriend, and then presents a final showdown on a mysterious planet. The story keeps getting bigger and bigger, and the developers seem to have trouble making sure the game can keep up.

Of the new additions, the weapon crafting feature makes it worthwhile to stick around. Even the cooperative mode injects some fresh blood (and sorely missed horror elements) back into the formula. The essential ingredients of what makes a Dead Space game great keeps changing from one iteration to the next, but at least Visceral Games always finds a way to make it enjoyable.

Dead Space 3 released on Feb. 5, 2013 for the Xbox 360, PlayStation 3, and PC. The publisher provided GamesBeat with a Xbox 360 copy of the game for the purpose of this review.