The same year its “customers” voted Electronic Arts the worst company in America, the game publisher also released the best-reviewed titles on average, according to review-aggregation site Metacritic.

In 2012, EA had an average critic score of 75.2 on Metacritic, which collects the average score from dozens of different reviews for each game. That was enough to put it ahead of Microsoft, Sony, and Nintendo as its best-reviewed game publisher of the year. The company’s best reviewed game was Mass Effect 3 with a 93. It’s best original published game was Kingdoms of Amalur: Reckoning with an 81. It’s worst-reviewed game was Medal of Honor: Warfighter with a 53.

Electronic Arts decided to pull the plug on future Medal of Honor games based on Warfighter’s poor performance at retail. The fact that it was the company’s worst reviewed game of the year probably didn’t help. 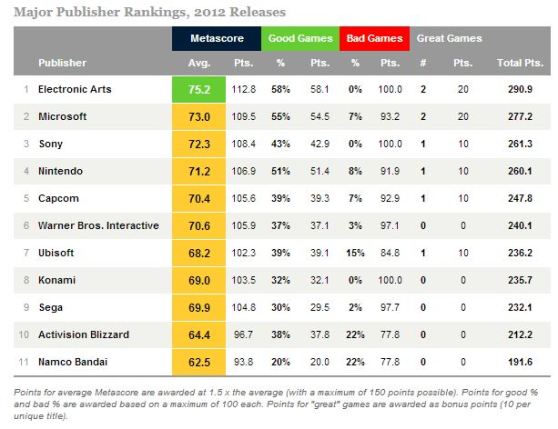 Interestingly, EA’s most direct competition, Activision, only just cracked the top 10. The Call of Duty publisher only managed an average score of 64.4 on the strength of Diablo III’s average review of 88.