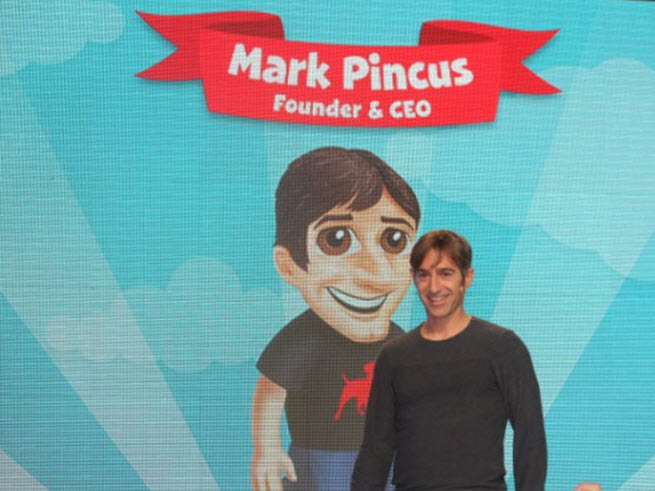 Zynga got some of its magic back in the fourth quarter, reporting a narrow profit on higher-than-expected revenues.

As the largest social gaming company with a big presence in mobile games, Zynga has become a bellwether for the emerging social and mobile game industry.

The company grew dramatically on Facebook from 2008 to 2012, and it raised a billion dollars in an initial public offering 13 months ago. But the stock cratered in August after the company reported weaker-than-expected earnings and a slowdown in casual simulation games on Facebook.

Zynga reported a profit of 1 cent a share on revenues of $311 million and bookings of $261 million, down 15 percent from a year ago. Analysts expected a loss of 3 cents a share on bookings of $212 million. Zynga itself had guided analysts to bookings of $204 million to $214 million, so the results are much better than expected. In after-hours trading, Zynga’s stock is up 7 percent.

In the meantime, chief executive Mark Pincus reorganized the management team and laid off 5 percent of the staff. He appointed David Ko as chief operations officer and promoted several other executives. He also shut down nonperforming games. The actions seem to have helped turn the company around, but the results are still mixed in a number of ways.

Growth just isn’t what it used to be. For the full year, Zynga’s revenue was $1.28 billion, up 12 percent from a year ago. Bookings were $1.15 billion, down 1 percent. The full-year net loss was $209 million, and adjusted earnings before income tax, depreciation and amortization (EBITDA) was $213 million.

“The biggest highlight of the quarter was seeing our team deliver a successful sequel in FarmVille 2, a next-generation social game that offers cutting edge 3D experiences loved by millions of FarmVille fans,” said Pincus, CEO and founder of Zynga. “In 2013 we’re excited to bring this new class of social games to mobile phones and tablets and build a network that offers an easier,better way for people to play together.”

During the quarter, the number of daily active users increased to 56 million, up 3 percent from 54 million a year ago. But compared to the prior quarter, DAUs were down  percent from 60 million in the third quarter of 2012.

The number of monthly unique users was 167 million, up 9 percent from 153 million a year ago. And it was down 6 percent from 177 million in the third quarter.

On Dec. 31, Zynga had five of the top 10 games on Facebook, according to AppData, in terms of DAUs. In the fourth quarter, Zynga expanded its third-party publishing platform, launching eight web games and four mobile games designed by outside game developers. In December, Zynga mobile gamers in the U.S. spent more time in Zynga games than the next five game companies combined.

“Our team executed well in the fourth quarter and made important progress in building sustainable new revenue streams and further aligning our company around our best growth opportunities,” said David Ko, chief operations officer of Zynga, in a statement. “2013 will be a pivotal transition year and we are focused on achieving three strategic objectives: growing our franchises on mobile and web, expanding our network and maintaining profitability on an adjusted EBITDA basis. With 298 million monthly average users, including 72 million on mobile alone, Zynga already has the largest social gaming audience and remains the best positioned company to lead in building the future of social gaming.”

Zynga closed the year with $1.65 billion in cash, down from $1.92 billion a year ago. In the fourth quarter, ad revenue was $36.8 million, up 35 percent from a year ago and up 19 percent from the third quarter. Zynga repurchased 5 million shares of common stock in the quarter.

For the first quarter of 2013, Zynga project revenue of $255 million to $265 million. It expects a loss of $12 million to $32 million, and earnings per share losses of 2 cents to 4 cents a share. Bookings are expected to be $200 million to $210 million. For the full year, Zynga is projecting a profit in terms of earnings before income tax, depreciation and amortization.