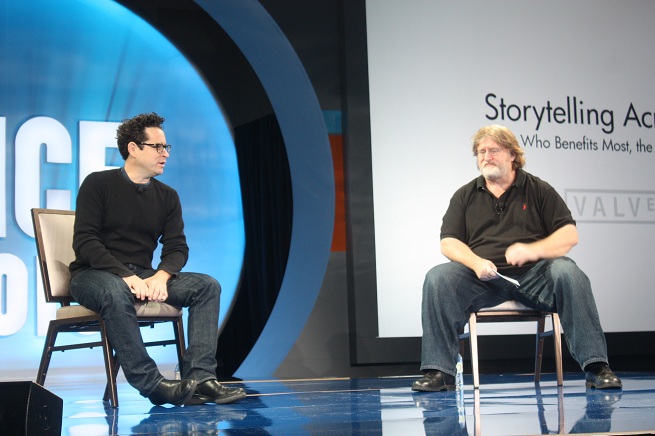 LAS VEGAS — Two entertainment greats — film maker J.J. Abrams and game maker Gabe Newell — sparred with each other today about whose medium was better. The truth is, however, that their media have moved closer to each other and become more like “transmedia,” or entertainment that crosses platforms. Their conversation was an entertaining look at what we can learn in between the borders between different media.

And then they revealed that they are working with each on movie and game projects. 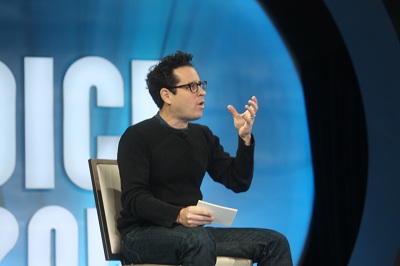 Abrams’ star has risen in Hollywood as he directed films such as Super 8 and Star Trek. Last week, Disney named him the director of the upcoming Star Wars: Episode 7 movie.

Newell is a celebrity in his own right, as Valve is the maker of Half-Life, Portal and Portal 2, Left 4 Dead, Counter-Strike, and others — all highly regarded and notable games. Valve also runs the Steam digital game distribution and community service on the PC, and it is considering entering the living room console market with the so-called Steam Box, an open Linux-based machine. 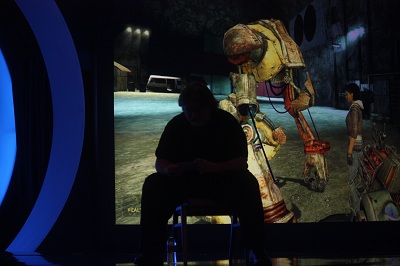 The two celebrities shared their views on stage at the 12th annual DICE Summit, an elite game industry event in Las Vegas. Abrams thanked Newell for the games that he and his family have enjoyed over the years. The audience laughed throughout the conversation, and the faux antagonism was clearly staged to make the divisions between movies and games seem sharper.

Abrams started talking about how films are linear and they craft the experience that the filmmaker wants the audience to have. Then Newell interrupted him and said, “Not to pick on you, but movies take away the notion of agency.”

He showed a clip from Cloverfield, featuring massive destruction happening in front of the camera, and Newell then said, “Put the camera down and fucking run.”

Abrams said, “The problem I have in games is that players are sometimes running in the same direction.” Abrams showed two clips where a player could completely ignore a computer-controlled character who was talking to the player’s character. The player could interrupt the conversation and throw a grenade at the person.

“When you and I are playing Left 4 Dead, you can come over and save me,” Newell said. “It is our story.” 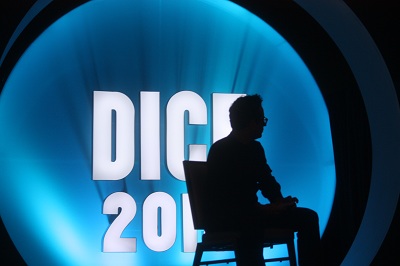 But Abrams retorted that there should be consistency and meaning to the story being told.

Abrams showed a couple of scenes from Jaws, saying that film makers can plant seeds early on in a story that are pulled into a major plot element later on in the film. But Newell showed a clip from the Portal 2 video game where plot points are delivered in a very cinematic, movie-like way.

“It leads you toward the resolution of the game, and one of the great things about this is that it is under the player’s control,” Newell. “The self-paced mechanism is key” to a better psychological experience and multiple playthroughs. Movie makers could learn from this pacing, Newell said, where the player gets the satisfaction of being in control.

Abrams showed a clip from Star Trek where he embedded an image of R2-D2 from Star Wars in a pile of debris outside of the Enterprise.

“So I should go back to watch all of your films to study debris and find out what movie you are directing next?” Newell said. 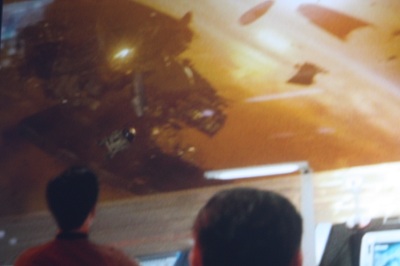 Abrams showed another clip from Die Hard and noted it was 23 minutes into the film before the real action started. That sequence sets up all of the pyrotechnics that happen later.

“Movies let you experience moments that are not the point but are everything,” he said.

Newell showed a scene from Half-Life 2 where you get a new weapon. But the scene shows more of the background behind the character Alex, her sense of playfulness, and her relationship with her father. In that sense, Newell works in the same kind of storytelling into the fabric of a game.

“I love your games,” Abrams said. “It would be fun to work with you on.”

“We are recapitulating a series of conversations about what happens when game and movie people work together,” Newell said.

And the kicker: The two men are working together on a game, and Valve will see how it can contribute to an Abrams movie.