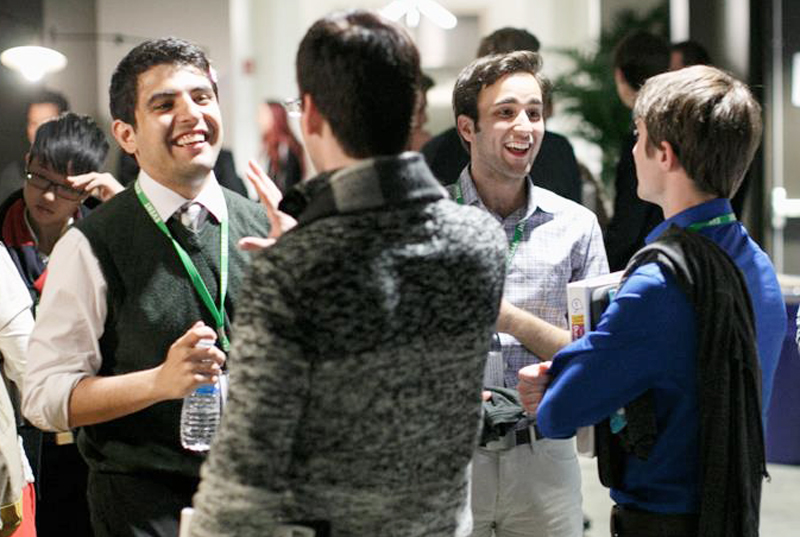 Scores of LGBTQ young folks gathered in Menlo Park, Calif., last weekend to find out exactly what a career in tech means for them and their queer peers.

They were taking part in a mammoth conference-slash-job-fair called Out For Undergrad. The Out for Undergrad Technology Conference, now in its second year, was held at Facebook’s headquarters and gathered together the crème de la crème of college-age programmers, with a special focus on diversity in sexuality and gender expression.

Gay and transgender engineers and developers from Box, Yahoo, Square, and Facebook held a panel session early in the first day of programming to talk generally about Silicon Valley’s attitude toward LGBT folks and specifically about their own coming-out-at-work experiences.

“Coming out is a constant process; you don’t just come out once to your friends at school or your parents,” said Michael Ruderman, a Stanford MBA student who runs OUTC.

“Whether you’re getting a job at a bank or a large tech company or a startup, the idea of coming out can be scary. For some people, that fear is legitimate based on the towns they come from and the families they have. The goal of this conference is to make those students worry just a little bit less.

“And if they end up at a company that doesn’t support them, that they know there’s a network in Silicon Valley that will support them.”

I am the only openly gay guy on my team. At a startup company, you can’t expect a whole LGBT group running smoothly. –Sekhar Paladugu, Box

The Out for Undergrad organization supports young folks coming out early and often, even in the more conservative halls of business and finance.

“It’s a whole lot harder to come out later in your career,” Ruderman points out. “If you start lying about your girlfriend, eventually, someone’s going to want to meet the girlfriend. But if you come out early, you won’t have to admit to a lie. And the conversations you’ll have will be a whole lot less awkward.”

Also, he points out, the tech community can be one of the least threatening environments in which to come out. It skews young and liberal; its heart beats in San Francisco, the LGBT Mecca of the Western world; and when it comes to the industry’s engineering needs, no one at a tech startup is likely to turn away a qualified candidate.

“It’s one thing to tell the students this,” said Ruderman. “It’s another thing to bring them inside the walls of one of the most important companies in technology and let them see how true that really is.” 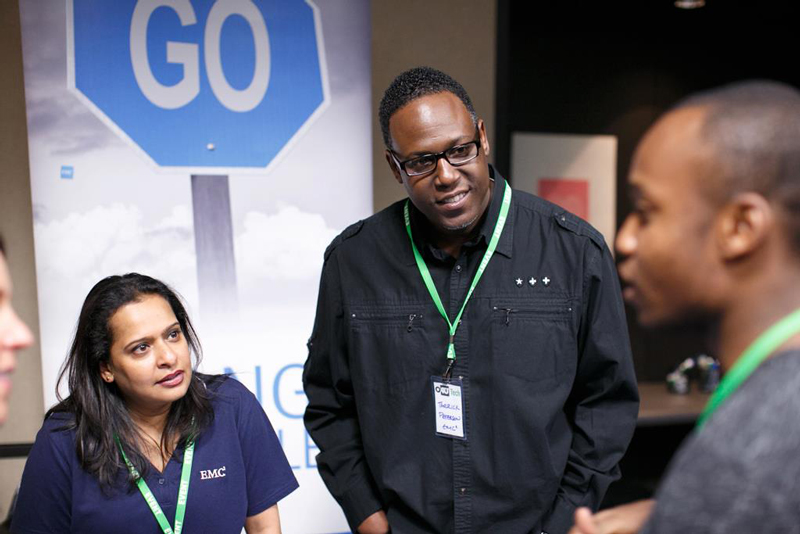 It’s accepted wisdom in the tech startup community that diversity is good. Diverse teams build better products that appeal to a wider, more diverse swath of the general population.

The problem is, accepted wisdom be damned, we are not a diverse community yet. We lack women, people of color, and LGBT folks in some of the most important areas of engineering, management, and product development.

Another point of accepted wisdom is that tech is naturally a meritocracy. A good startup tech person making hiring decisions will look through almost any aspect of personality or appearance in order to see the code or product on the other side. Hypothetically and ideally, the work speaks for itself, and good work gets job offers.

I came out pretty timidly in my first job. Not everyone needs to be wearing a rainbow flag on their first day at work. –Chris Maliwat, Facebook

Clara Tsao is a student at UCLA; she’s studying biology with a computation emphasis. She told us she’s also taking sociology courses. The breadth of study reflects what she describes as a chameleon-like adaptability to change. Tsao has a part-time job (and a full-time job offer) at AT&T; she’s also been active as a hackathon participant in Los Angeles.

As a self-motivated engineer with a range of interests, Tsao is already showing signs of hireability in a dev-deprived world. And as a female Asian bisexual, she’s sort of the poster child for diversity, something she says is important to her when considering her career options.

“If you work in a bureaucratic environment and people can’t be themselves and create what they want to create, you’re not able to adapt,” she said. “I think that flexibility is really important. I look for a workplace with a lot of creativity, where I can push for what I want to get done.”

In that sense, Tsao is talking like other young engineers we talk to every day — people who want to have some ownership, who want to make product decisions, who want to be involved in company-shaping discussions, even though they know they’re still earning their wings. Diversity as she sees it serves as evidence that a company can embrace other points of view — including hers — when it comes to building things.

But much like her startup CEO counterparts, Tsao places equal emphasis on diversity and meritocracy. She’s not asking for special consideration or any handouts; she wants her work to speak for itself.

“Tech is so different from business,” she continued. “You show your qualifications and abilities through code and product rather than having to conduct a meeting. Part of it is merit-based. … It’s like Second Life: You can be an avatar, it just matters what you produce. I don’t think developers will judge you as long as you can produce.” 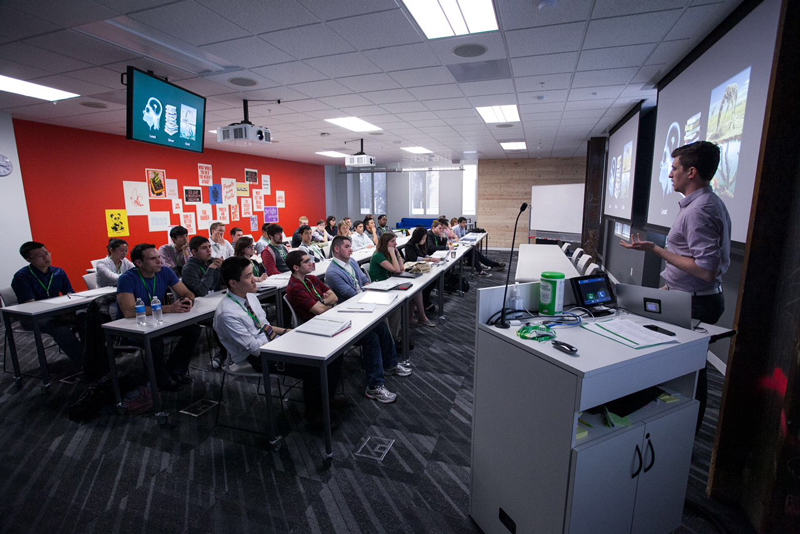 Why a gay dev is different

“Being out in tech wasn’t something that I knew companies wanted to happen until this conference,” said John Espinosa, a decidedly fresh-faced young man studying computer science at the University of Illinois at Urbana-Champaign. He won’t graduate until 2015, but he writes code in Java, C++, C#, and JavaScript, and he’s palpably inspired by the Internet.

“The whole reason I got into computer science is Ze Frank and the Nerdfighters … this community that did all these amazing things, a bunch of people finding a medium online to connect. And I wanted to be able to facilitate things like that.”

Espinosa’s excitement is contagious. Do you, yourself, remember the first year or two that you were really, sincerely excited about the Internet? Maybe it was the first time you discovered an amazing forum. Or when Twitter launched. Or when you fired up your first blog and got your first reader. And as a college sophomore, Espinosa is still high on that first taste of how the Internet can change lives and connect people.

At a startup, you’re more willing to be yourself, and you start questioning those work/private life boundaries. –Shawn Morel, Square

And the fact that diversity-hungry startups are likely to look at him as a more interesting hire? “It makes me feel extremely excited, like there’s a network of individuals who are invested in my success,” he said. “Startup companies care about not only writing good code but also about your personal life, and they want you to be okay about coming into work and to feel safe.”

Espinosa had originally been discouraged from being out to the tech industry. Several people told him that a few entrepreneurs’ bad feelings toward the LGBT community might tank his chances of a brilliant career. “But overall, for me personally, through interactions with companies and recruiters, I’ve come not to fear it at all,” he said. “The work you do speaks volumes, and if companies don’t understand how you identify, it’s their loss.”

Espinosa, like all his peers at this conference, is a minority in a minority group. He’s not the stereotypical theatre gay. He’s not an artist or a hairdresser or a director. Finding other technically minded queer folks has been as mind-blowing for him as finding tech companies that accept and welcome LGBT applicants.

When we ask him what he’s looking for from recruiters, he doesn’t talk about LGBT affinity groups, partner benefits, or the company’s advocacy for same-sex marriage or participation in Pride events.

“What they can do is showcase their product in some way,” he said, “being able to show off your technology and the impact it’s having. I want to know I’m going to do things for your company that can blow people away.

“The second thing they can do is stress what I could do to make a huge change in the company.” In other words, he said, he doesn’t want to work on a product or feature so niche it never gets used outside a tiny department in a huge corporation.

“Leadership is huge to me, and being able to make important decisions is a huge part of who I am,” he said. “My career is not going to be sitting in front of a computer seven days a week. I want to impact where a company is going.”

Fascinatingly enough, Espinosa sounds exactly like every other young, on-fire developer I’ve talked to on the brink of a career shift. They, like the millennials they are, want to do big things. They want to be involved in big decisions.

In other words, entrepreneurs, you should hire a gay developer because he or she is exactly as talented, as enthusiastic, and as eager to take your company to big places as any of his or her straight peers. Sure, these folks may have a better understanding of certain demographics. They may have developed unique personal traits and strengths in a response to ongoing discrimination.

But at the end of the day, you should hire a gay, lesbian, bisexual, transgender, queer, curious, or other developer because in all the ways that matter, they’re just like the rest of us.

How to hire a gay engineer

So, you’re ready to hire your first LGBT developer, programmer, or engineer. Here are a few tips from our interviewees at OUTC and our friends in the LGBT community about how to get started.