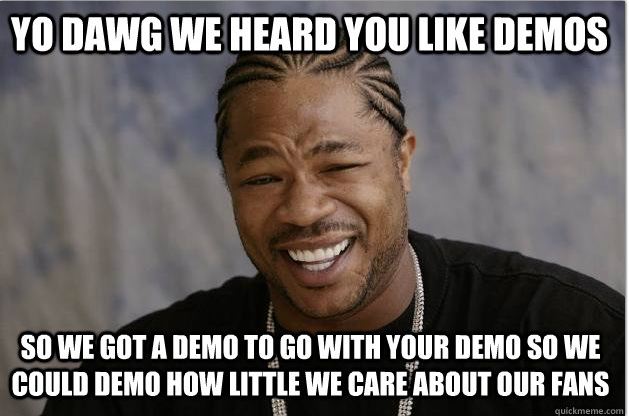 The publisher announced plans to release a new exclusive demo of Rayman Legends for the Wii U. This comes just a day after the company delayed the game and revealed it is now coming to Xbox 360 and PlayStation 3.

Apparently, this is the French publisher’s idea of damage control, as you can see from its post on Facebook:

But gamers aren’t happy. The game is finished, according to Ubisoft. The publisher is simply sitting on the Wii U version of Rayman Legends so it won’t take away from the hype of the September launch on Xbox 360 and PlayStation 3.

“There are no issues with the game development,” Ubisoft spokesperson Sarah Irvin told Digital Spy. “The only reason for the delay is to release on multiple platforms.”

Some early Wii U adopters are pretty upset. A majority of the responses on the company’s Facebook post are from angry fans claiming they don’t want another demo. One of them created the image at the top of this article.

We’ve reached out to Ubisoft to determine if it will add any more features to the Wii U game, but it hasn’t responded to our requests.

But based on Ubi’s comments so far, it doesn’t sound like new features are in the works. Now, it sounds like they’re gonna release a new demo, finish the game for Microsoft’s and Sony’s systems, and call it a day.