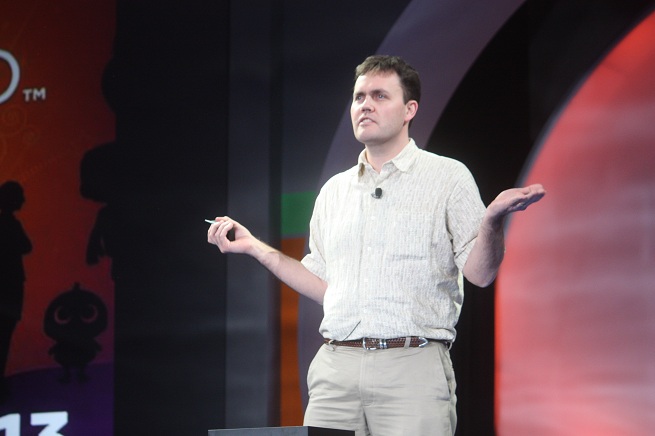 Jesse Schell, a game designer and professor of entertainment technology at Carnegie Mellon University, is one of the leading academic thinkers and communicators in video games. He raised his profile in 2010 when he gave a talk, “Beyond Facebook,” at the industry conference the DICE Summit that got more than a million views on sites such as YouTube and TED.

“That was shocking to me because I’m a college professor, and I’m not used to having people listen to what I say,” Schell, who is also the chief executive officer of Schell Games, said at his second appearance last week at the DICE Summit 2013.

In his 2010 talk, he urged Zynga to go to real-money gambling. That turned out to be prescient. He also predicted the iPad would fail because it was like a Swiss Army knife that didn’t do any one thing great. That prediction was a dud. He also foresaw that gamification, where non-game companies used game-like mechanics to spur customer engagement, could be applied to such a large swath of activities in the real world. That spurred the creation of a gamification industry, which was a strange side effect since Schell wasn’t saying this was a good idea at all. He also predicted an onrush of “authenticity,” something that fans expect and want from all of the entertainment, products, and services they embrace. His message in 2010 was that “games have crept out and are going everywhere.”

At this year’s DICE, Schell returned with a talk on “the secret mechanisms,” which was loaded with a million ideas and a million expert opinions. He made some keen observations about the hype curve and what’s hot in games. He noted that Zynga was hyped, it crashed, and everyone dumped on it, and it may now be poised for a more realistic comeback.

Schell thought that the gamification hype was off base because those companies are applying a one-size-fits-all solution, and they are failing to consider the nuances in what motivates people. He believes game designers carefully study the psychology of seeking out pleasure and how it is different from avoiding pain. Done poorly, gamification can be as dumb as “chocofication,” or making vegetables sweet so kids will eat them.

A good way for developers to entice gamers is to invite them to engage in plans, like figuring out how to reach goals in titles. But Schell worries about the mad rush into free-to-play games — not because it’s a good way to reach a wider audience. Rather, he worries about properly motivating players and distinguishing between work and play. When players want a game so much that they’re willing to pay $60 upfront, there’s nothing wrong with that. But if you create a free-to-play game and then create frustrating hurdles so that the player is forced to pay money in a microtransaction, then it becomes a pain. If you trick players into playing a game that forces them to pay, they may resent you and quit. 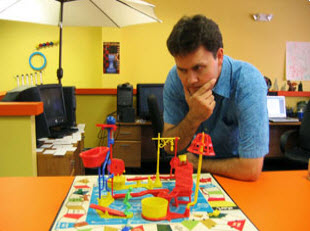 “There are different channels in the brain for seeking positive consequences and avoiding negative consequences,” he said. “These games promise you utopia, and then you find yourself in chains. That’s the part that’s frustrating.” It would “suck” to make a game like Skyrim into a free-to-play title where you have to buy things to make progress. He pointed out that Disneyland started out with tickets, or microtransactions, and then shifted to a single ticket price. Disneyland’s revenues have gone up because people like to pay one price up front and then do whatever they want. Payment systems have to be fair.

“People are willing to sacrifice to get into utopia,” Schell said. “Every single one of us is searching for utopia … . In utopia, you don’t screw people out of nickels and dimes.”

To get to that utopia in games, Schell advocates creating social games that don’t use gimmicks to get you addicted. Rather, he wants social gaming that makes you feel more connected to friends and family. He believes games with magical interfaces will be appealing. And he wants companies to make people into better people, or the people they want to be.

“We are shifting into an enjoyment-based economy,” he said. “And who knows more about making enjoyment than game developers. Fake marketing bullshit isn’t going to work anymore. You have to bring people to the promised land. Then you will be in an excellent place.”

Schell hasn’t figured everything out. He tried his hand last fall at an idea that allowed players to suggest the course of a game that designers were creating, episode by episode. Schell Games created Puzzle Clubhouse to crowdsource games, but it didn’t work out. Schell Games is moving on to an interesting new idea that allows players to propose their own ideas for a game that professional developers can then create.

After his talk, we caught up with him for an interview. Here’s an edited transcript.

GamesBeat: Tell us about pleasure and pain pathways and why it matters in games.

This is one of the problems with free-to-play. It lures you in initially with pleasure-seeking or reward-seeking behavior, and then it gradually shifts over to pain avoidance. Don’t let your friends down. You’ve got this, and you might lose it if you don’t do something. You plant the strawberries, and if you don’t harvest them, you’re going to lose the money and everyone’s going to see your wilted crops. 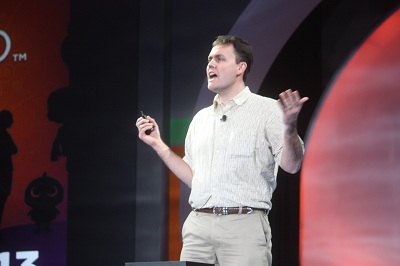 GamesBeat: This is what winds up not being fun — or frustrating players.

Schell: It’s part of the tool for slow seduction of players into something that isn’t fun anymore. Something that starts out fun becomes gradually less fun. You still want to do it as much. If you’re looking at the player incentive, it stays level, until one day it suddenly drops off. I love the way [my colleague] says it. People don’t just stop playing Facebook games. They divorce them. That’s why.

GamesBeat: Is it similar to gambling in that way? Gambling lures you in, but it doesn’t wind up being that much fun.

Schell: For some people, it does. You could draw the similarity to if you’re gambling and you fall behind. Initially, you start out, and you’ve got your pot of money. You hope to leverage it into a big win. I think about gambling a lot because it’s interesting, and it’s hard to think about. If you go in with a pot of money and you say, “If I lose this all, it’s OK,” then you never get into it. If you go in and you say, “I’ve got this much money, but I don’t want to lose it all. I’m OK with putting up half,” but then you feel like you should dig in to that second half, then you get into that bad place of pain avoidance. “I gotta get my pot back, or I’m screwed. I shouldn’t have bet the company payroll on this.”