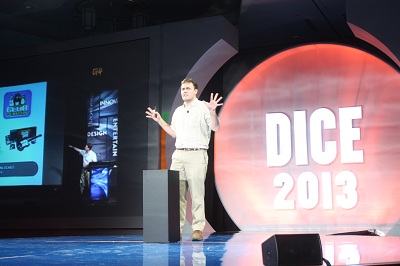 GamesBeat: One thing I’d worry about is the accidental eye click or something. You’re just looking around and you don’t mean to zero in on something, but it brings up a menu in your eye.

Schell: Oh, yeah. That would be a problem, obviously. The answer may be some mixed hand and eye system. Let the hands do what they’re good at, which is pushing buttons, and let the eyes do what they’re good at, which is motion in a two-dimensional space. What I do know is that for the games we’ve created, when you get it right, it feels really good. In fact, some of it makes for good game structure. I want to look over here, but I know that if I do that, it’s going to cause a problem. But I can do it for a little bit. The notion that taking a glance at my enemy puts me at risk for a moment, but I get information about the enemy, that’s a good game balance. There are parts of it that I think can work well. There will be big challenges, though, figuring out the right way to do it.

GamesBeat: Did that pleasure revolution talk generate a lot of feedback or create more learning for you?

Schell: I got some feedback about it. Part of the reason I like to give the talks is that it makes me think about things that I might be too lazy to think about on my own. The talks create a pressure to think about things. I don’t think I could have done the talk I did now if I hadn’t done the explorations that were part of that talk. For me, it’s cemented in a new view of human psychology. I’m fooling around with the idea of another book that’s kind of about that.

The way I tend to think of it is, I’ve learned to see certain mental structures as real things. I was talking about that difference between fantasy-oriented people and reality-oriented people. I’ve never heard of anyone formally studying that, but I feel like I can see it. I talk to people, and I get to the point where I feel like I can identify which one you are. Knowing about those real structures is necessary if you’re going to successfully navigate the games space.

GamesBeat: Have you found something that you think is a great mobile game? Something that could help the whole category take off?

GamesBeat: I’m thinking from maybe a company point of view. No single company except Apple is dominating this thing. It’s not like any one of these many, many games is starting to be the one that everybody gravitates to. It’s more like there’s this explosion of games all over that are doing well.

Schell: Right. That’s partly because it’s a massively open market. Apple doesn’t want anyone to get momentum in it, so they don’t allow it much. When the market is that open and it’s so easy for people to enter and it’s still exploratory, it’s going to be a terrifying red ocean. Not only that, but probably 90 percent of the people in the market don’t care if they lose money. Most of the indie guys are like, “Hey, I just want to get a game out there.” They cross their fingers a little bit, but they don’t necessarily believe they’re going to make money at it. Then you’ve got guys like Rovio.

They just kept buying lottery tickets until they won. It’s probably not fair to call them lottery tickets because they were honing their craft, and they were getting better and better. But have they had a string of successful new franchises since then? They’ve successfully riffed on their existing franchise, but the truth is, it’s just really hard to consistently find something new that’s going to succeed in a crowded, passion-based market. That’s the key. This is a passion-based market. People are willing to lose money in order to go for it. 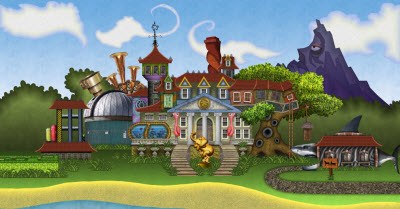 We’re going to be making an announcement at [South by Southwest] about something new we’re doing at Schell Games that is all about that. You remember Puzzle Clubhouse from before, right? This is the next generation of Puzzle Clubhouse. We did Puzzle Clubhouse, and people liked it. We had a good response. But it wasn’t quite taking off the way we wanted it to. We looked at why, and we realized that with Puzzle Clubhouse, we were saying, “We’re gonna make a game a month. Come help us.” That’s fine, but people showed up and said, “I have a game idea! How can I get that in here?” We didn’t have a good way to really support everybody’s game ideas because of the way we had this rigid time cycle.

We’ve closed the door on it for now. The games are still up there, but we’ve kind of put it into a cocoon. We’re hoping this butterfly is going to come out at SXSW, which is where we say the opposite. We say, “You have a game idea? Bring it to us.” The community will vote on it, and we’ll start prototyping it. If it gets voted up enough, we’ll make it. We’ll sell it. We’ll split the money with you. We’re all very excited about that. We don’t have a name for it yet because we’re still fussing that through legal, but hopefully we’ll have that set for SXSW.

GamesBeat: Is there a model for that? Somebody else doing something like that in the film industry or something?

Schell: There are two systems that are closest to it. There’s one called Tongal, which is crowdsourcing of viral advertising videos. There’s another one called Quirky, which you might now. It’s for inventions. Someone invents a new broom handle, they bring it there, and this industrial design company might turn it into a product. We’ve watched both Tongal and Quirky and we’re looking at where they’re succeeding and where they’re failing. We’re trying to learn from that.

The game development cycle is very different. One of the things that’s exciting about the games cycle in terms of crowdsourcing is that people love to comment on what they like and don’t like about games. It’s very easy to put up an initial prototype. People want to say, “Hey, I like this,” or “I think there should be lasers!” People are very interested in that. I’m excited because it allows a level of participation that some of these other things don’t allow.