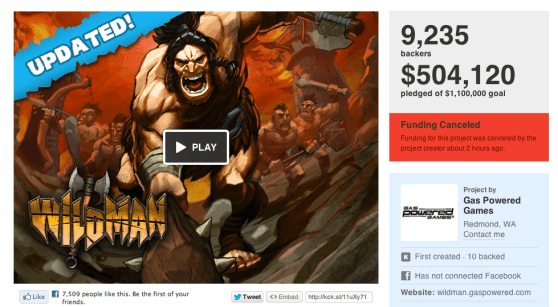 Updated at 5:25 p.m. Pacific with additional information on publisher interest.

Updated at 7:37 a.m. Pacific with response from Chris Taylor.

With four days left, and still short of its goal by over half a million dollars, Gas Powered Games pulled its Kickstarter project for Wildman. Add another game to the pile of Kickstarter projects that never met their funding goal.

As website Joystiq reports, Gas Powered Games cancelled the project and posted the following message on the Kickstarter page for Wildman:

We have some news today. We are canceling the Wildman Kickstarter.

At this point, it makes sense for us to focus our attention on other ways to keep Gas Powered Games running. Unfortunately, we are unable to share any specifics in public. When we have news to share, we will be posting it on our site. If you want status updates, or if you want to continue discussing Wildman and/or this Kickstarter, please consider migrating over to forums.gaspowered.com.

We are profoundly grateful to those of you who backed this project and Gas Powered Games. Your passion and hard work put us in a position to write this exciting new chapter in the history of GPG.

In the video he posted, studio head Chris Taylor said that he’s been working “in the background” as he figures out ways to keep the studio running. “If all goes well, which I think it will, I’ll be able to give you all some great news in the weeks ahead,” and Taylor added, “If it wasn’t for all of the hard work, and the passion and the support that I’ve seen this last month, I would not be in a position where I could be looking at some of the opportunities that we’ve got today.” Furthermore, in a recent Three Moves Ahead strategy-gaming podcast, Taylor explained that there was some interest from publishers.

In a recent interview with website Rock, Paper, Shotgun, Taylor said that Gas Powered Games received several calls from publishers interested in Wildman, “but they would love to see us raise the money on Kickstarter, and then they’ll take us the rest of the way.” In other words, those publishers wanted to see the project meet its goals before handing over additional funding.

Unlike most failed Kickstarter campaigns, the developer had hope for Wildman because Gas Powered Games is an established developer that has shipped notable titles such as Dungeon Siege and Supreme Commander. It seems that Taylor expected success along the lines of other big-name developers that jumped at the Kickstarter crowdfunding trend. That wasn’t the case for Taylor’s studio, which reportedly cut 80 percent of its workforce, and is now focusing on keeping the staff it has left.

Based on how the campaign went, it doesn’t seem that Gas Powered Games maintained the best attitude on the project. At one point, Taylor asked fans whether or not he should continue with the Kickstarter. Yes, there’s more to this than crossing your fingers and hoping for the best, but being able to project confidence in your campaign will give others the confidence to help fund it.

GamesBeat reached out to Gas Powered games for comment, and Taylor responded, “Can’t quite talk about what’s next,” but said to “check in anytime.”