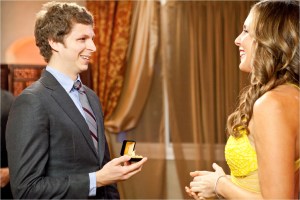 Original video content is increasingly the coin of the realm among big Internet companies locked in a war for eyeballs. Yahoo CEO Marissa Mayer said as much to analysts during the company’s earnings call at the end of January.

“We see video as a big opportunity for future monetization, and we’re really just getting started here,” she said.

Netflix has generated tons of press with its new $100 million original series “House of Cards,” and competitors like Hulu and Amazon are edging into that same territory. And Yahoo has likewise been investing heavily in its own slate of original programming, on its own terms.

The company’s original Web series “Burning Love” – a spoof of “The Bachelor” – is returning to Yahoo Screen this week for a new season. It’s a testament to the power of strong original content, since the response of fans and critics to the first season led to a pickup of two additional seasons.

The new season launches on Valentine’s Day, and the company has done something new this time around. For the first time, Yahoo sold all the premium ad inventory for an original program to a single ad agency – PHD, which handles such brands as Foot Locker, Safeway, and Lord & Taylor.

That means PHD is not only the exclusive sponsor of seasons 2 and 3 of “Burning Love,” but this agency-wide, multi-brand partnership includes deep integration of brands into the show and media elements being customized for “Burning Love.”

“In season 1, we did not sell ‘Burning Love’ to a sponsor,” said Erin McPherson, Yahoo vice president and head of the company’s video and original programming. “What’s great about PHD coming on as opposed to a single brand is it gives us flexibility to work the right brand into the right places. It was really important to the ‘Burning Love’ team to not be forcing products in.

“Our brand integrations are really fun. And we’re still in the early days of figuring out the best, optimal ways to do this.”

As another testament to the show’s success, it’s making the jump from the Internet to TV not long after launching a new season of the web version. Season 1 of “Burning Love” is debuting on E! Feb. 25, with seven half-hour episodes set to air.

McPherson said “Burning Love” is part of the comedy slate of programs Yahoo launched in 2012 and part of an overall channel initiative Yahoo started in 2011.

“What’s been fantastic is the way we’ve been able to really leverage the power of our network to program these shows contextually,” she said. “’Burning Love’ would not only live on Yahoo Screen but would be promoted across all our verticals. It’s such a great parody of ‘The Bachelor,’ so we covered it in Yahoo TV right alongside ‘The Bachelor.’ Because it had great cameos with actors like Kristen Bell, we covered it on our celebrity site. What that did is find audiences where they were already engaged and help make the show really successful.”

She said Yahoo’s internal data showed that users weren’t dropping off after episode 1 – they were sticking with it. In addition, it drew a relatively young and new crowd, and users tended to “binge view” the series.

New episodes of the web series will go live every Thursday and Friday starting Feb. 14.

You can see a trailer for the second season at www.yahoo.com/burninglove.