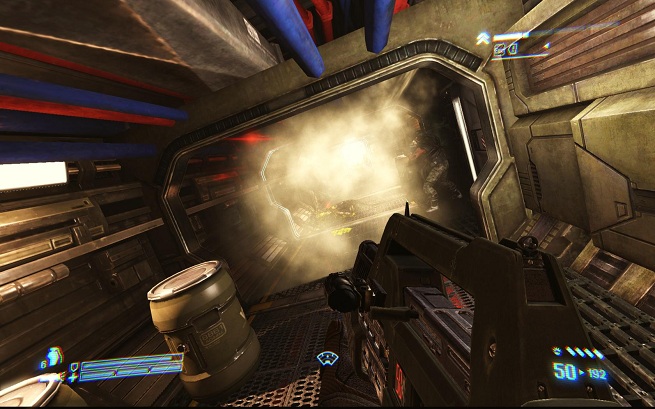 Though not the first, this latest narrative discrepancy was just staggeringly inept. Did the writers each spend the last six years in isolation, only meeting up a few weeks ago to stitch together their disparate ideas?

I’m running through a secret research facility, and I find an audio log with a recorded voice that informs me of the speaker’s dissatisfaction with the electric fence protecting the compound. The barrier doesn’t even have a backup generator, complains the man.

When I reach the control room to turn off the fence, my fellow marine says doing so will trigger the auxiliary power, so I have to disable some couplings first. What? Didn’t I just listen to an audio log complaining that the barrier doesn’t have such a security measure?

This is only one of many internal inconsistencies in developer Gearbox Software’s Aliens: Colonial Marines, which film studio 20th Century Fox has positioned as official canon in the Alien series’ storyline after the events of James Cameron’s much loved Aliens and David Fincher’s largely misunderstood Alien 3. As a slavish retelling of fan-favorite parts from the films, Colonial Marines offers few new ideas of its own, and what it does present is severely lacking in originality and creativity. If you were hoping that Gearbox could recapture the allure of Aliens that so many found lacking in Alien 3, prepare yourself for disappointment. 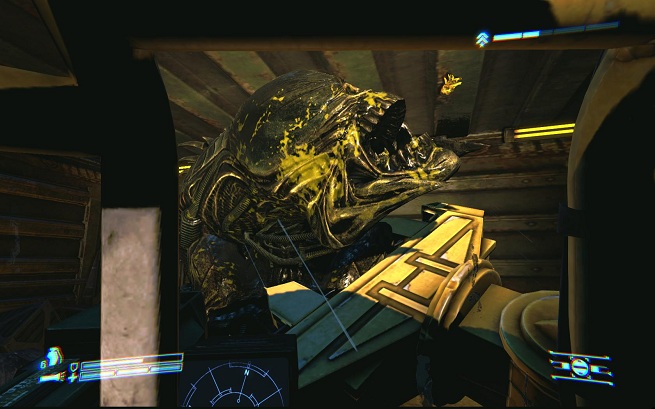 It’s mostly Aliens, all right … mostly
Like Rebellion, the studio that created the first and most recent Aliens vs. Predator games, Gearbox gets many of the small details right with Colonial Marines. The click of the motion tracker, the blaze of the pulse rifle, and the hiss of a stalking alien — these seem straight out of Aliens. The heads-up display has that same low-resolution light blue text from the pilot monitors of the Sulaco, the spacecraft that brought the Aliens team to the recently surveyed world of LV-426. Gearbox has even modeled in both Ridley Scott’s smoothed-headed creature from Alien and Cameron’s ridged one.

But unlike Rebellion’s 2010 release Aliens vs. Predator, something just feels a little … off. While the tracker’s blip sounds right, the device’s onscreen visual indicator uses a series of well-defined circles instead of that amorphous white blob that struck fear into Hudson when he proclaimed, “There’s movement all over the place!” The lack of that iconic alien death shriek is ever-present. The M56 smartgun has no sense of weight. It’s a little weird that my pulse rifle doesn’t hold a 99-round clip.

Rebellion already set expectations of authenticity high by nailing every last detail with tremendous accuracy, so every slight misstep that Gearbox takes is jarring. Colonial Marines keeps falling into a sort of uncanny valley where I feel right at home until the developer messes up one little thing that takes me out of the fantasy of reliving these classic films. 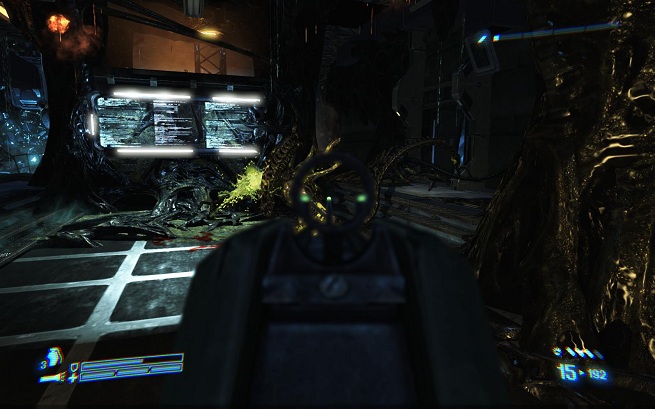 Weapon customization lets you be an ultimate badass
You’ve got your standard issue arsenal from the movie, like the M41A pulse rifle, the M56 smartgun, and the pump-action shotgun for close encounters. Colonial Marines adds several new weapons to this mix, including an assault rifle that fires in short, controlled bursts; a battle rifle that acts as a high-powered sniper’s gun; a tactical shotgun for rapid-fire buckshot, and a submachine gun. Gearbox, though, is not satisfied with static weapons.

Throughout the campaign, you’ll earn experience. With each character level earned, you can unlock new components for the personal armory that you’re hauling on your back. These include swapping out the pulse rifle’s secondary-fire grenade launcher with a shotgun or mounting a laser sight on just about any firearm you have.

Your progression carries over into new campaigns and multiplayer modes. While that affects balance when playing competitively, it also makes replaying the single-player portion a bit more attractive, which Gearbox hopes you’ll do since the highest difficulty, Ultimate Badass, is clearly the intended way to play. Not only are you more fragile, but the entire HUD is gone (and crosshairs, too, making that laser-pointer upgrade worthwhile). You have to judge your armor, health, and ammo levels entirely without any onscreen counters, and that makes Colonial Marines a much more tense and gratifying experience.