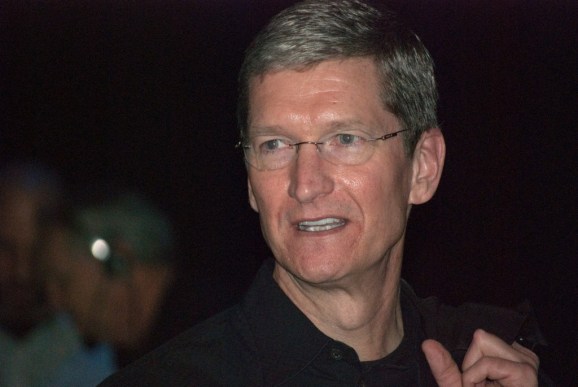 Tim Cook is speaking this morning at the Goldman Sachs Technology and Internet conference in San Francisco.

The Apple CEO has a lot to say to investors. His company’s stock has been ravaged by Wall Street in the past year, causing the company’s valuation to drop over $200 billion in the last half-year. Revenue in a record first quarter of almost $55 billion and profit of $13.1 billion didn’t make Wall Street happy, and Apple stock has continued to sag in 2013.

Above: Apple stock in the last six months

Cook started out with a bang, responding to questions about Apple’s cash stash and suggestions that Apple has a “depression-era” mentality, hoarding cash under its mattress.

Also see Tim Cook: “Apple is the center of innovation”

“Apple makes bold and ambitious bets on products, and we’re conservative financially,” Cook disagreed. “And last year, we invested 10B in CapEx, we think we’ll do similar this year … I don’t think those are the actions of a depression-era mentality.”

He did admit: “We do have some cash.”

Apple has about $137 billion in cash on hand, and has committed to returning $45 billion of that to shareholders over the next few years.

On the topic of investor David Einhorn’s hedge fund Green Light Capital’s lawsuit, which aims to prevent Apple from removing preferred shares, Cook was straightforward, calling the lawsuit a “silly sideshow,” adding that Apple would go to shareholders before making any changes.

See also: No cheap iPhone: Apple’s religion is ‘we must do something great’

“Frankly, I find it bizarre that we would be sued for doing something that’s good for shareholders,” he said, adding that the lawsuit itself was a waste of shareholder money.

In what might be a surprising answer even for long-term Apple followers, Cook said that over the last three years, Apple has averaged an acquisition about every other month. And, also surprisingly, Apple has looked at large acquisitions.

“In the case of large acquisitions, we have looked at large companies,” Cook said. “In each case we’ve done that thus far, it didn’t pass our test. We’re disciplined and thoughtful … and we don’t feel a pressure to go out and just acquire revenue.”

After speaking about Apple’s retail stores adding 30 new locations in 2013 and commenting on cheap iPhone rumors, Cook ended his time by gently but firmly responding to Apple critics, many of whom wear ties, use cufflinks, and trade stocks daily.

“We don’t care if people are lobbing grenades from the sidelines,” Cook said.

Rather, Cook plans to stay the course and continue what Apple is doing best, which Cook feels is “pretty incredible.”