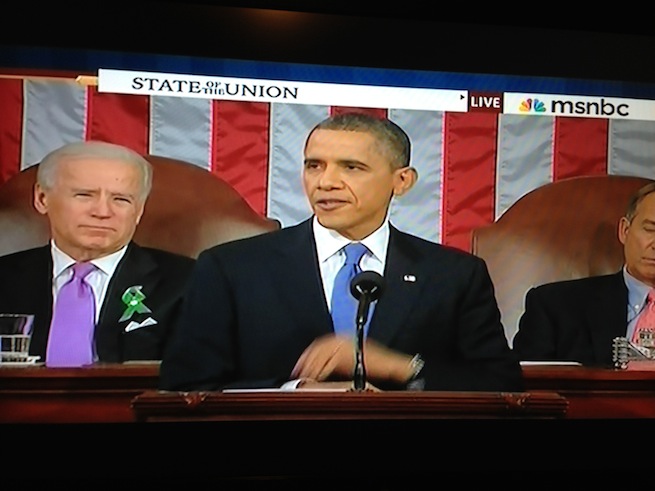 During Tuesday’s State of the Union addresses before Congress, President Obama repeatedly stressed the importance of new “research and technology.”

Arguably the overarching theme for tonight’s address was innovation: the President applauded Apple for its plans to manufacture Macs in America, referenced new technologies like 3D printing, and called for levels of research and development on par with the 1960s during the “Space Race.”

“Our first priority is making America a magnet for new jobs and manufacturing,” the President said. “If we want to make the best products, we also have to invest in the best ideas,” he continued.

There are things we can do, right now, to accelerate this trend. Last year, we created our first manufacturing innovation institute in Youngstown, Ohio. A once-shuttered warehouse is now a state-of-the art lab where new workers are mastering the 3D printing that has the potential to revolutionize the way we make almost everything….Now is the time to reach a level of research and development not seen since the height of the Space Race.” (President Barack Obama, State of the Union ’13)

The State of the Union (#SOTU) address touched on a variety of important issues, including bi-partisanship and the relationship with Congress, alternative energy, the War, and gun control. But we pulled out the key moments that are most relevant to the tech community:

The President said that our children aren’t being educated with the requisite skills to fill the high-tech jobs of the future. He stressed that schools that worked with employers and colleges to create classes focused on science, technology, engineering, and math, would be rewarded. Obama referenced schools like P-Tech in Brooklyn, which collaborated with New York Public Schools, the City University of New York, and IBM, to ensure students graduated with a high school diploma and an associate degree in computers or engineering.

Obama stressed that college is over-priced and out of reach for millions of students and families. He said that taxpayers could not subsidize the rising cost of higher-ed and asked that colleges do their part to keep costs down. He asked Congress to alter the Higher Education Act so that “affordability and value” determine which colleges receive federal aid.

Obama stressed that immigration reform would help technology companies to attract skilled entrepreneurs and engineers to the U.S. He said that “real reform” involves cutting wait periods and reducing bureaucracy.

But commentators pointed out shortly after the speech that the President didn’t offer concrete solutions to this issue, beyond a vague call for “comprehensive immigration reform.”

Obama said that America faces a growing threat from cyber attacks; “hackers” who are stealing people’s online identities and accessing sensitive information behind firewalls. The President referenced the executive order signed today that would strengthen cyber defenses through the development of a set of best practices.

The President stressed that we need to protect our infrastructure, especially with the recent rash of hacker attacks against major U.S. newspapers, banks and federal agencies. Just a few weeks ago, the Washington Post joined the growing list of publications whose computers were penetrated by Chinese hackers.

The indomitable rise of healthcare-technology

The President was particularly strong when making an appeal for affordable healthcare. He repeatedly referenced the Affordable Care Act, and said that one of the biggest drivers of long-term debt is the rising cost of healthcare for the aging population.

Med-tech entrepreneurship received a boost last year when Todd Park, cofounder of Athenahealth and Castlight was was promoted from CTO of the Department of Health and Human Services to CTO of the United States. Already, Park has been instrumental in launching a Presidential Innovation Fellows program, which invites innovators from outside government to work with the powers that be to solve socio-economic problems, particularly those facing health providers and hospitals.

On the topic of Medicaid, Obama proposed reforms that would “achieve the same amount of healthcare savings by the beginning of the next decade as the reforms proposed by the bipartisan Simpson-Bowles commission.”

Read the full text of the State of the Union address here.