We were trying a lot of things in a lot of ways that had never been done before. I think that was just one where we … we looked at and thought, “OK, what situation did we put the player in? Was it rewarding for the player? Was their choice rewarded?” We said, “It probably isn’t delivering on that in the way it needs to.” We certainly made sure that there was much more setup going forward. Or that opportunity, like you’re talking about, for the player to intervene. 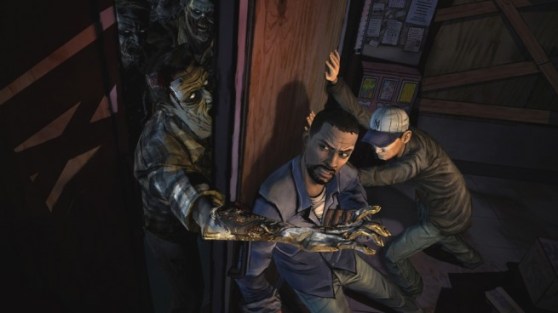 But yeah, that moment … it’s an intense moment. The whole thing. It was kind of like … so much was going on. Where’s the player? Is it about Lilly, or is it about Carley? The choice ended up being whether you took Lilly with you or you put her out on the street. She was going to shoot Carley anyway, or Doug. She was so out of control. So what do you do about that? That was what we were thinking. But taking Carley out of the game was a big deal for a lot of people. They really had started to invest in a relationship with her. I think in that case, that’s one that we would look back at and not do the same type of thing again, as dramatically. We’d figure something else out at that point.

GamesBeat: Sure, sure. The comic book is all about losing characters that, 40 issues in, you’re like, “Man, this guy is like family.” Then they take an arrow to the face and you’re like, “What the hell?”

Connors: [Laughs] And I think that was some of what we were going for. The world is dangerous. Sometimes you don’t even have … instead of putting you in the position of, “You could have saved her,” we put you in the position of, “What the?! What do I do about her?” — that kind of spinning-out-of-control type of thing, putting pressure on the player from a different emotional state to make a choice. Certainly, no matter what, it was a controversial one for people.

GamesBeat: Yeah. Like I said, just for me, just as player input, it was more that he was standing right next to Lilly. In most of the game, you’re like, “OK, I did that.” That was the one time where I thought, “I would have done something else.”

GamesBeat: OK, so that was basically my whole motive for doing this interview, to complain about that moment. But since we’re here … . [Laughs] Telltale has worked on very high-profile IPs like Jurassic Park and Back to the Future. What do you think it is about The Walking Dead that has drawn so much notice, to the point where it’s nominated for game of the year and things like that? It’s not just adventure or strategy game of the year — it’s overall game of the year. What is it that’s elevated your work to that kind of mainstream notice?

Connors: Well, I think what we did with the game — you can hear the topics that people are talking about downstairs. It’s about emotion in games, about connecting with characters, about telling interactive narrative and interactive stories. The Walking Dead franchise aside — and I think the strength of the Walking Dead was huge as far as making people aware of what we were doing — I think that play experience itself is so unique and so differentiated that it stands out.

Up until probably ’09, we’ve been working on getting our distribution pipeline in place and getting our episodic production model in place. The real focus for ’10–’12 was, “OK, let’s take the mechanic away from targeting a niche audience and move it toward something that all gamers can enjoy.” Something that has that adrenaline rush and the tension and the drama. They feel like they own the experience. They feel like every button press means something. The growing of the mechanic through Back to the Future, which was an easier adventure game, to JP, which was a more tense, dramatic, but less interactive experience, into Walking Dead — it was all the evolution what a Telltale game could be.

Then Walking Dead on top of that, as a franchise, accentuated everything we were trying to do — from creating a sense of tension in the world and putting real things at stake and making the player really feel pressure when they’re talking to somebody or making a decision, and then making them live with that decision. I think all of that combined, plus the episodic model, with it coming out every month from April onward and the anticipation that people had and the way people experienced it in a new way … . It was the focus of video games in 2012 for basically eight months of the year. There was nothing else out in April, so we won that. It started to gain traction with [Episode] 2. People were shocked that we could do two in a row. Then [Episode] 3 blew everybody’s minds because of what it was. It was so emotional. Then it was into …“Oh my God, if they can just finish this!” Then we hit the finale, it was game of the year, and all that. Even today, in February 2013, it’s still being talked about. It was just everything working together as far as game mechanics, franchise, and model. 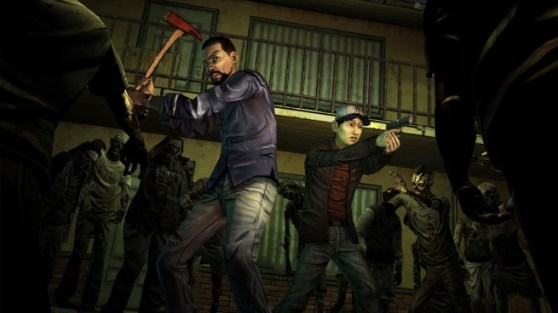 GamesBeat: I want to preface this by saying that I don’t mean to take anything away from what Telltale did. Do you think that if you had created the same zombie game, only without the Walking Dead name attached to it, you would have received the same amount of notice and accolades?

GamesBeat: Do you think that when you make an actually good licensed game, such as —

GamesBeat: I was going to say Escape from Butcher Bay.

GamesBeat: They took the time. They didn’t release it with the movie. They went this other way. It didn’t sell all that well, but it was critically very popular, very well received. It was kind of like, “This is how things should be done.” Do you feel like a big part of it was that people have such shitty expectations for, like you said, licensed games? Do you think you were able to really wow people by providing something solid?

Would we have created a zombie world as compelling as Robert Kirkman’s? I would never claim that. I wouldn’t take credit for the thing that Robert Kirkman has set up emotionally because he’s built a great franchise. He’s done something amazing. But games in general, there are plenty of really superstrong licenses that have had gameplay mechanics that didn’t resonate. The experience was poor even though the license was strong. You can’t separate out the two. But I think the innovation is in the way the game plays and how it makes people feel. Some element of that is definitely the franchise, but none of the characters in that game are from the franchise except for Glenn, who’s in like 20 minutes of the product.

GamesBeat: You said you played the game 30 or 40 different ways. If you recall any specifics, what were some of the elements that didn’t make it into the game for one reason or another?

Connors: Let me think. Something specific? In Episode 2 — we added a lot of stuff to Two. What’s funny is that stuff that ended up on the cutting-room floor stands out less than stuff that we made work.

GamesBeat: That makes sense. It’s probably for the better.

Connors: [Laughs] Yeah. But it’s funny. I really can’t remember anything that’s worth bringing up. There was certainly stuff that we added. We added the Duck investigation scene in three, in order to make people give him more time, to give him a moment where he was something. With Carley and Doug, we added Carley as your confidant, to tell the backstory of Lee. Lee could open up to her about what happened with his wife and everything else. Doug, on the other hand, was having this internal crisis about whether he was actually of value to the group or not. That’s why he was always building things. Those were character things that we added to flesh it out because we didn’t feel like there was enough meat on those storylines.

GamesBeat: I guess that’s a good warning sign for Season Two. Any time you get to spend a special moment with a character, it’s like, “Oh, goddammit, they’re gonna die.”

GamesBeat: It’s safe to say Season One was Lee’s story. It literally ends when he dies. The scene goes black. Then there’s the scene with Clementine afterward, partway through the credits. I don’t know how much you can talk about this, but is that suggestive of passing the torch to that character?

Connors: I think that’s probably valid. A lot of it was just to communicate, “Hey, she’s out. She’s not in Savannah anymore. Stuff can still happen, but she’s out. Don’t worry about Clem anymore. In this moment, she’s mostly safe.” But I think that was more the purpose of it. It was certainly to let people know that she was OK.