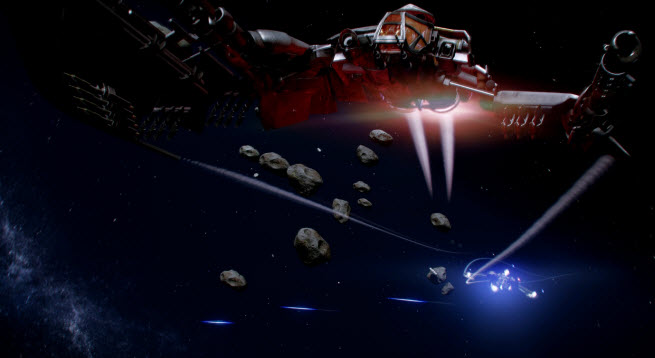 Chris Roberts is under a lot of pressure to get Star Citizen right. The new massively multiplayer online sci-fi title from the creator of the legendary Wing Commander sci-fi spaceship combat games raised $7.7 million via crowdfunding on the promise of bringing back the glory days of science fiction combat simulations in a persistent online universe.

Roberts scored the money via Kickstarter and his own web site, Roberts Space Industries, for his new company Cloud Imperium Games, where he is chief creative officer. In an interview with GamesBeat at the DICE Summit game conference, Roberts said he is now working in the public eye. And everything has to pass muster with the thousands of fans who funded his project. On top of this, Roberts believes he’ll raise another round of funding from professional investors, just to ensure that he has all the resources he needs to live up to the eye-popping 3D visuals in his demo. 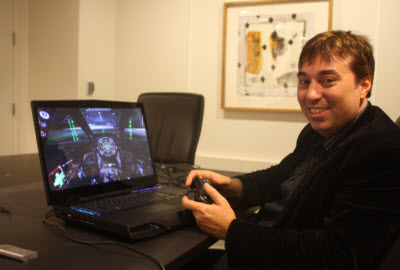 Last week, he posted about how he plans to handle “death” in the Star Citizen universe. If your spaceship is destroyed and you fail to bail out, you’ll lose your character and pass on the belongings to your heir, especially if you have taken the trouble to get an insurance policy.

Roberts’ game is perhaps the most ambitious crowdfunded online game that has ever been attempted. But he is accustomed to swinging for the fences. He started in games at Origin Systems, the Austin, Texas game studio that Electronic Arts later bought. He became a star in 1990 with the release of Wing Commander, a space combat game that produced nine sequels and spinoffs. For a time, it was a huge business for Electronic Arts, but the copycat sequels bored gamers and drove the franchise into the ground.

Roberts left Origin in 1996 and started his own company, Digital Anvil. Roberts said that no one has really picked up the mantle in sci-fi combat sims since his last company created the ill-fated Freelancer, published by Microsoft in 1999. That game took 4.5 years to make (and six to get to market), and by the end of it, Roberts had left the firm to make movies, and Microsoft acquired his company. Freelancer was not a huge commercial success, but it was memorable. The player went from planet to planet, running missions and building a cool spacecraft. In Roberts’ original vision, each one of those worlds was a living, breathing thing, full of people and adventures. It was a precursor to modern massively multiplayer online games.

Star Citizen will carry on that legacy on the PC when it launches in a couple of years. In the meantime, Roberts will release bits of it so that fans can battle test them. You’ll be able to inspect your ships and then fight in dogfights in the not-so-distant future. Once those modules are complete, they’ll be plugged into the larger game, which includes the online universe and a single-player campaign.

GamesBeat: You have an update, I guess? More things are happening?

Chris Roberts: I did this fairly big update the day before yesterday about how death is going to get handled in a persistent world. Single-player is pretty easy. You die, and you go back to an earlier save point. But obviously, in a multiplayer online world where there ‘s lots of other people playing, you can’t go back in time. The universe carries on. 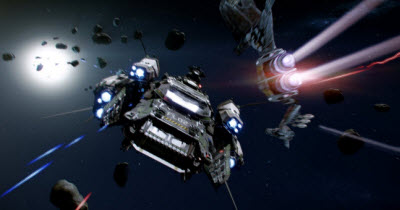 GamesBeat: How do you handle death?

Roberts: The hardcore version is permadeath. Your character dies and you start a new character. That’s hyper-realistic, but maybe not so much fun. Then the other side of the coin is that you never die. You respawn and you’re basically immortal. You just lose time getting back to the spot you were at. I did an update on something I’ve been thinking about for a while that I thought would give a sense of mortality and history and risk, but not be too punishing. It’s a slightly different approach from the way most multiplayer games work.

The big challenge for something like that in the environment where I’m building a game is that I’m doing it publicly. It’s not behind the curtain anymore. You have to figure out how to share concepts with people. You’re never going to please all the people all the time. You’re never going to keep them all happy. There’s always people who are polarized on either side. That’s one of the challenges of a crowdfunded game where you’re open about your development process. Any time you’ll try something slightly out of the norm, it takes some people out of their comfort zone. They’re going to be upset about it.

It generally went over well. I think it could work, and it would fix some of the problems I have with big multiplayer setups, where I have trouble getting immersed in the world. That’s my goal with Star Citizen, to have this living universe. People have history. If you’ve been in a lot of dogfights and escape by the skin of your teeth and I see you in the bar, you’ll have scars on you. Maybe you have a cybernetic arm. You look like you’ve been through the wringer a few times. I haven’t really seen that. That’s kind of like the character version of ship damage, so to speak. That was the recent big thing.

GamesBeat: The usual punishment for death in games is that you have to respawn far away, right?

Roberts: Yeah. You have to go back to the spawn point.